Algeria’s approval to open a Hamas office in the country may prompt regional and international pressure against it. 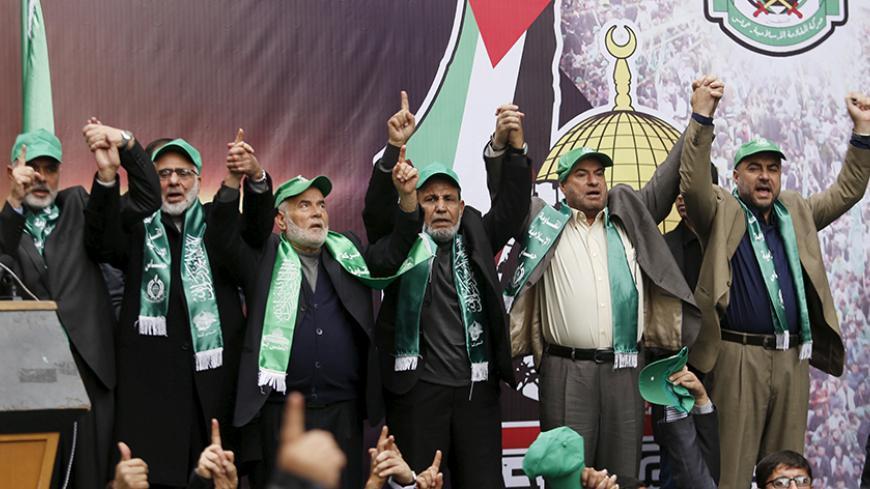 Deputy Chairman of Hamas’ political bureau Mousa Abu Marzouk said Aug. 29 during an interview on Algerian TV channel El Bilad that a Hamas representative office was opened in Algeria a few days earlier, without specifying the exact date. Hamas had submitted a request to the Algerian authorities, which approved and welcomed the idea. Hamas leader Mohammed Othman was appointed supervisor of the office affairs.

Hamas made its announcement during the official six-day visit of some of its leaders to Algeria, including Abu Marzouk, Othman and Hamas’ foreign relations chief Osama Hamdan. The Hamas officials met with Algerian factional, public and official figures during the visit, which took place Aug. 25-31 and included press conferences.

During the closing press conference Aug. 31, Abu Marzouk praised the support that Algeria’s people and government have shown for Palestine and the resistance, and for helping Palestinians under siege in the Gaza Strip.

Ahmed Yousef, the former political adviser to the deputy chairman of Hamas' political bureau, Ismail Haniyeh, told Al-Monitor, “By opening an office for Hamas on its territories, Algeria has officially acknowledged the movement. This is a huge political achievement for Hamas despite its shaky regional relations. Algeria constitutes a wide public base that sympathizes with the Palestinian people. I lived in Algeria between 2004 and 2006, and I realize the extent of solidarity between Palestinians and Algerians. Hamas has already implemented its political activities and collected financial donations to help Palestinians under the umbrella of the Algerian Movement of Society for Peace [MSP] that is affiliated with the Muslim Brotherhood. The Palestinian Authority’s [PA] pressure on Algeria to close Hamas’ office will be fruitless.”

Hamas-Algerian relations did not surface overnight. Hamas leaders visited Algeria in the past, such as the head of its political bureau, Khaled Meshaal, in March 2007 and former Minister of Interior in the Hamas government Fathi Hamad in June 2009. In addition, former Palestinian Minister of Foreign Affairs Mahmoud al-Zahar, former official spokesperson for Hamas’ government Taher al-Nounou and member of Hamas’ legislative council Salah al-Bardawil organized a visit in May 2011.

Algeria also backed Hamas during Israel’s war on Gaza in 2008-2009, when it refused in January 2009 to consider the movement a terrorist group. In May 2013, Hamas spokesman Sami Abu Zuhri called for opening an official bureau for the movement in Algeria, to complement Algeria’s support for the Palestinian cause.

Hamas’ government in Gaza established in 2013 Mahfouz El Nahnah high school, which is named after the founder of Algeria’s MSP. Algerian convoys flooded to Gaza in 2014 in solidarity with the Palestinian people to offer humanitarian aid. Also, the Algerian Hospital backed by the Algerian Muslim Scholars — which is an Algerian nongovernmental organization that has good relations with Hamas — was opened in the Gaza Strip in 2010, and it treats thousands of Palestinian patients.

When Hamas announced opening an office in Algeria, Palestinians and Israelis alike had something to say. David Roet, the deputy permanent representative of Israel to the United Nations, tweeted Aug. 30 to voice his distress and described Algeria’s step toward Hamas as worrying and annoying.

Fatah spokesman Osama al-Qawasmi explained this diplomatic answer, saying Aug. 30 that Hamas is crossing red lines in Palestinian politics by opening an office in Algeria to replace the PLO. All Hamas’ attempts to eliminate the PLO are pointless.

On Sept. 1, Algerian writer Abdelhafid al-Izz wrote in an article for Dzayer Info news site that Algeria’s decision to allow Hamas to practice its activities on its territories is one of several decisions this fall within the scope of a new rapprochement between Hamas and Algeria.

Nagi Sharab, a professor of political sciences at Al-Azhar University in Gaza, told Al-Monitor, “Algeria has made a huge step toward Hamas by allowing it to open an office there, and this is a political achievement for Hamas regionally. The office offers Hamas a window to communicate with the Algerian public opinion more freely, on condition that the movement does not overstep the Palestinian Embassy’s role there. The PA might pressure Algeria due to its positive step toward Hamas, out of fear of competition from the movement in Algeria. Therefore, Algeria might have to reassure the PA. The success of Hamas’ office in Algeria depends on its ability to present itself as a national Palestinian movement to Algerians rather than a political Islam current.”

Hamas’ representation in Arab and Islamic countries is divided into three different categories. The first category includes countries in which Hamas has representative offices; for instance, Turkey, Qatar and Iran. The second category encompasses countries that refuse to welcome Hamas offices because they are at odds with the Muslim Brotherhood and consider Hamas one of its entities, such as Jordan, Egypt and Saudi Arabia. The third category includes countries such as Indonesia, which refused Hamas’ demand to open an office there in December 2014 because the country has ties with the PA rather than the Palestinian organizations.

Although Hamas is honored to have received Algeria’s approval to welcome it officially on its lands through the movement’s representative office, Hamas is aware that Algeria might face regional and international pressure due to this positive step toward Hamas. The movement is not on good terms with many countries in the region and the world, and some, such as the United States, have even classified it as a terrorist group. Therefore, Hamas is likely to be cautious not to add pressure on Algeria and coordinate all its steps with the country to encourage other states to follow suit.