Algeria and Russia are suggesting new initiatives to bring about a breakthrough to reconcile Palestinian factions. 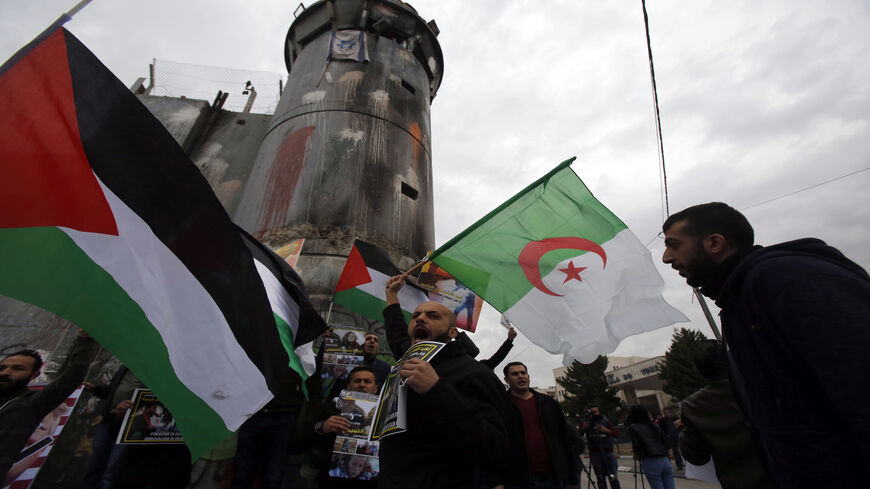 GAZA CITY, Gaza Strip — Since the 2007 Palestinian division, several countries, including Saudi Arabia, Yemen, Qatar, Egypt and Russia, have mediated to achieve reconciliation between Fatah and Hamas. Yet all mediation efforts have failed, as the two sides have not implemented any of the signed agreements.

Most recently, Algeria picked up the Palestinian reconciliation dossier, in an attempt to achieve a breakthrough.

On Dec. 6, Algerian President Abdelmadjid Tebboune said his country is ready to host a dialogue between all Palestinian factions.

Algeria is one of the main providers of financial support to the Palestinians. During a meeting with Palestinian President Mahmoud Abbas Dec. 6, Tebboune announced a $100 million financial contribution from Algeria to Palestine, and allocated 300 scholarships for Palestinian students in Algerian universities.

Meanwhile, the Palestinian people have great respect for Algeria, given its historical support for Palestinian rights in the conflict with Israel, be it at the official or popular level.

A Palestinian source who attended the meetings in Algeria, told Al-Monitor on condition of anonymity (he also refused to reveal his affiliation), that the Algerian officials are currently holding exploratory meetings with the various Palestinian delegations. The discussions aim to open a new page in the reconciliation file, while ignoring the understandings reached in previous years, according to the source.

He said, “When it comes to managing the Palestinian dialogues, Algeria believes in the importance of starting from scratch and forgetting about the previous understandings that were concluded between Fatah and Hamas. Algeria believes that reconciliation failed in the past due to the problems found in the previous agreements.”

Azzam al-Ahmad, head of the Fatah delegation in Algiers, told Al-Monitor, “We brought our vision for a sustainable reconciliation to Algeria, and it is based on two key conditions. First is a Hamas recognition of the conditions set by the Middle East Quartet [recognizing Israel, renouncing terrorism and accepting the international agreements signed by the Palestinian Authority (PA)]. Second is to return the Gaza Strip to the Palestinian legitimacy, which the PA represents.”

Ahmad noted that the Fatah delegation requested that the Algerian officials pressure Hamas to allow holding the municipal elections in Gaza, and to allow the Palestinian government, led by Mohammad Shtayyeh, to work freely so as to assume its responsibilities in the Gaza Strip and manage the border crossings.

He added, “After achieving all this, we can move forward with forming a national unity government that includes all factions, including Hamas, and whose main task would be to hold general Palestinian elections.”

Ismail Radwan, senior Hamas leader who did not attend the meetings, told Al-Monitor, “Fatah is not interested in achieving reconciliation, which can be seen in the Fatah Central Committee’s decisions Jan. 18, which renewed the committee’s confidence in Azzam al-Ahmad, who is in charge of the reconciliation file within Fatah.”

He said, “Azzam al-Ahmad is not a flexible person and he does not accept the idea of ​​involving Hamas in the government. Therefore, renewing confidence in him means that Fatah will continue with the same approach of monopolizing decisions and of not being serious about achieving reconciliation.”

Radwan noted, “As long as he [Ahmad] is leading Fatah’s delegation for a reconciliation, no real breakthrough would be achieved in this file.”

Commenting on his movement’s vision for reconciliation, he said that it is based on the restructuring of the PLO, so as to involve all factions, especially Hamas and Islamic Jihad.

He explained that his movement demands an end to Fatah’s monopoly of Palestinian decision-making. He noted, “The reconciliation cannot succeed without having Hamas in the decision-making circles.”

Mukhaimar Abu Saada, professor of political science at Al-Azhar University in the Gaza Strip, told Al-Monitor that there is little hope that Algeria succeeds in the reconciliation between Hamas and Fatah.

“I think that it is not the right time for Algeria to host a Palestinian dialogue, in light of the heightened dispute, the political and media exchange of accusations between Fatah and Hamas, and the increased political arrests in the West Bank. Also, Hamas recently escalated criticism against the PA and President Abbas following his meeting with Israeli Defense Minister Benny Gantz at the latter’s residence Dec. 28,” he said.

Talal Awkal, a political analyst and author for the local Al-Ayyam newspaper, told Al-Monitor, “By convening a dialogue, I think that Algeria seeks to achieve a breakthrough in the Palestinian file that can be submitted to the Arab League summit that [is expected to be held] in Algiers in March.”

He said, “Algeria is more likely to fail soon, because it does not have knowledge of the reality of the Palestinian division, which is based on the lack of political harmony between Fatah and Hamas. Fatah still pins its hopes on a settlement of the conflict with Israel and recognizes Israel, while Hamas refuses to go back to the option [of settling the conflict through negotiations] that has proved to be futile and a failure over the past decades, and does not recognize Israel.”

Amid Algeria’s attempts to achieve Palestinian unity, Russia called on Hamas to visit Moscow to discuss reconciliation. Mousa Abu Marzouk, Hamas' political bureau member and head of its international relations and political guidance department, told al-Aqsa TV Jan. 11 that his movement received a Russian invitation for a dialogue on the Palestinian reconciliation.

Abu Marzouk said that the Fatah movement “did not respond to the Russian call for a reconciliation dialogue.”

However, Ahmad told Al-Monitor, “We received a Russian invitation to hold a new dialogue for reconciliation, but we asked them to postpone this invitation until we see where things will go in Algeria. We do not reject any invitation from any party to achieve Palestinian reconciliation.”

Abu Saada downplayed the importance of this Russian invitation, saying, “I think that Moscow is seeking through its invitation to stress on the role it assumed in this Palestinian dossier in the past, at a time when Algeria is seeking to make a breakthrough in this file.”