Hamas and Algeria are in talks about accommodating Hamas leaders as well as opening a new office in the sympathetic North African country. 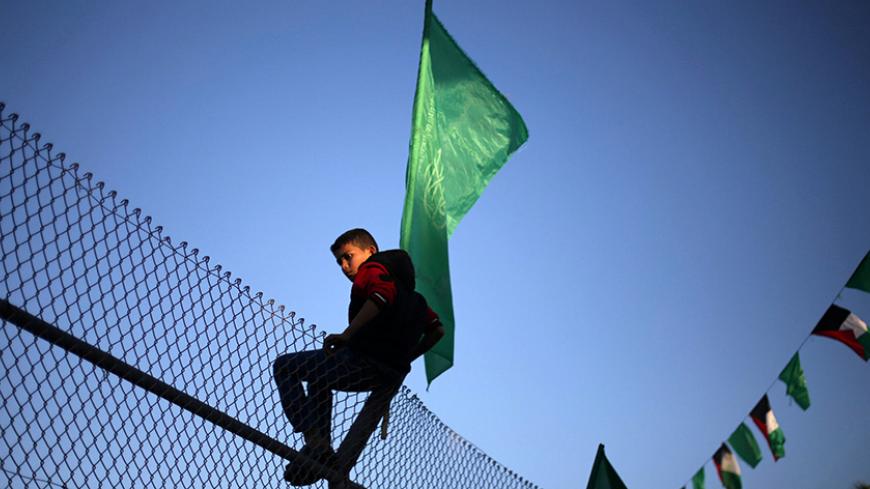 A Palestinian boy climbs over a fence during a rally marking the 29th anniversary of the founding of the Hamas movement, in Khan Yunis, southern Gaza Strip, Dec. 11, 2016. - REUTERS/Ibraheem Abu Mustafa

Hamas spokesman Sami Abu Zuhri stated July 15 that he personally asked Algeria to accommodate some Hamas leaders. He said leaders of the movement are welcomed upon arrival to Algeria and their visas require only a couple of hours to process, unlike other Arab countries that sometimes take more than two months to be issued. He did not identify the Hamas leaders receiving special treatment in Algeria, nor did he name the Arab countries that take much longer to process visas.

Abu Zuhri himself has been in Algeria since the beginning of this year, meeting with Algerian political leaders. His most recent meeting was July 26, when he met with the Algerian Association of Muslim Scholars and the Algerian Workers Party to discuss means of supporting the Palestinian people.

Hamas’ foreign relations chief Osama Hamdan told Al-Monitor, “We have visited Algeria several times in an official capacity, and we met with its officials. Hamas enjoys official and public Algerian support, and Algeria has contributed to the success of the convoys to lift the siege on Gaza." Hamdan noted that the party also appreciates the lack of ties between Algeria and Israel, adding "Hamas has good relations with all Algerian political parties, especially the ruling National Liberation Front.”

Foreign aid convoys have been sailing for Gaza since 2009, carrying relief for the Palestinians in the form of food and medication. Still, the convoys haven’t manage to break the siege and deliver their aid directly to Gaza.

On July 19, news circulated that a Hamas delegation headed by Hamdan is set to visit Algeria to participate in political events and meet with factional leaders in the coming days. Hamas’ visits to Algeria are state sanctioned and enjoy official security protection.

The Saudi-backed Asharq Al-Awsat newspaper reported July 17 that Hamas is searching for a foothold in Algeria to shelter its officials who left Qatar in early June. Algeria received an official request from Hamas to establish a representative office for the movement on its territories, but it has yet to respond.

Hamas leaders are now spread across the Gaza Strip, the West Bank, Lebanon, Malaysia, Qatar and Turkey. A Hamas political source told Al-Monitor on condition of anonymity, “Hamas’ inclination toward with Algeria preceded the latest Gulf crisis because the movement realized the importance of the North African countries on the media and political levels. Hamas seeks to mobilize more supporting countries to expand its influence around the world without relying on one country alone.”

Hamas turned its attention to Algeria after June 9, when Israeli Defense Minister Avigdor Liberman voiced Israel’s demands to the US ambassador to the EU, Nikki Haley, to pressure Lebanon to expel Hamas leaders who flew there from Qatar.

Political science professor at Al-Ummah University Hussam al-Dajani visited Algeria in 2006. He told Al-Monitor, “Hamas made a mistake when it did not pay Algeria enough attention after it won the legislative elections in 2006, even though Algerians love Palestinians. But the movement has made changes since its latest internal elections in May and has started reassessing its regional ties to widen its circle of friends. Although Algeria and the Palestinian territories are geographically far from one another, globalization has drawn Hamas closer to Iran, Turkey and Qatar despite their distance. The same can apply to Algeria.”

Talk about opening an office for Hamas in Algeria coincided with July 11 statements from Saudi Ambassador to Algeria Sami Al-Saleh describing Hamas as a terrorist organization. Saleh’s statements did not go over well in Algeria, and Abu Zuhri responded to him July 14, saying that if Hamas were a terrorist group, Algeria wouldn’t have welcomed its members so warmly.

Ahmed Youssef, former political adviser to the deputy chairman of Hamas' political bureau, Ismail Haniyeh, told Al-Monitor, “Algeria might face pressure from the Arab world and the West if it welcomes Hamas on its territories, especially as the US labeled Hamas a terrorist group. Algerian Islamists do not have enough political power to pressure the state to embrace Hamas.”

He added, “I am not sure Algeria can shelter Hamas leaders despite Algerians’ great sympathy for Hamas and the Palestinian cause. I realized this when I lived in Algeria between 2004 and 2006. Still, it would be a suitable refuge for Hamas leaders abroad and spare them from dispersion around Arab capitals.”

Head of the Algerian Movement for the Society of Peace Abdul Razzaq Muqri said July 20 that Hamas' welcome in Algeria will depend on official approval. In an interview with the Tunisian Al-Jarida newspaper July 22, Tunisian security analyst Ali al-Zarmadini said he expected Algeria not to allow Hamas leaders to move freely around the country if it does let them live there. Algeria is not like Qatar, which gave Hamas leaders full freedom.

Abdullah Abdullah, a member of Fatah’s Revolutionary Council and head of the political committee of the Palestinian Legislative Council, told Al-Monitor, “If Algeria agrees to accommodate some Hamas leaders, its decision will be based on humanitarian considerations, in the wake of their departure from Qatar following the Gulf crisis. But this decision will not have political dimensions, and Fatah does not mind it. Algeria is a historical ally for Fatah and the Palestine Liberation Organization, and it will not replace this alliance with Hamas. Hamas should know that any rapprochement with a foreign state will happen through the PLO, not behind its back.”

Will Algeria be the next stop for Hamas, despite the distance separating the Palestinian territories and Algeria? Or will Algeria cave to foreign pressure and turn Hamas leaders away?