Algeria's president managed to bring together Palestinian President Mahmoud Abbas and Hamas leader Ismail Haniyeh for the first time in 6 years, but divisions between the two rival factions they represent may be too deep at this point. 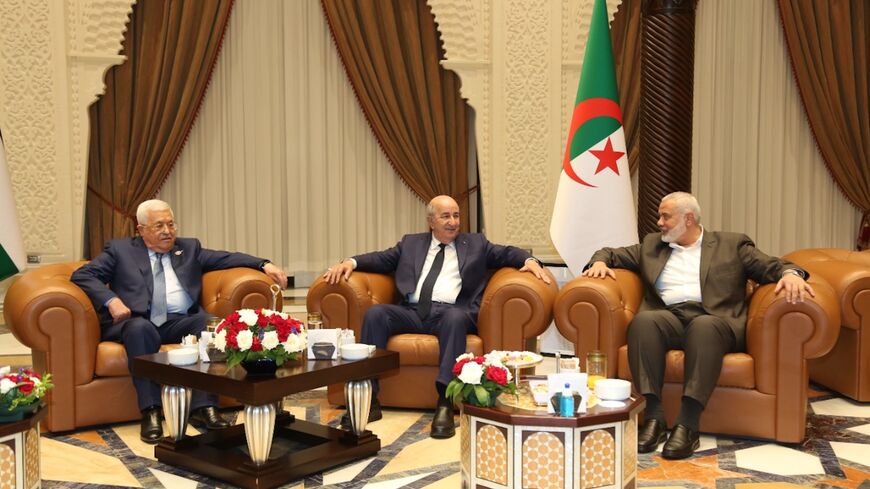 Most Palestinians felt that the meeting was held out of mere political courtesy to Algeria, which celebrated the 60th anniversary of its independence on July 6.

The meeting, which witnessed a handshake between Abbas and Haniyeh in front of the cameras for the first time in years, was not followed by any meeting between the leaders of Fatah and Hamas.

In January, Algeria had called on the rival Palestinian factions to discuss internal reconciliation as a prelude to a conference scheduled to precede the Arab summit in November. However, these efforts failed to come to fruition in light of the continuing differences between the Palestinian factions.

It seems both Abbas and Haniyeh followed protocol and political courtesy in order not to raise the ire of Algeria, as the latter is the only Arab country that has continued to provide financial support to the Palestinian Authority (PA) at a pace of $100 million annually despite the declining Arab support. Meanwhile, Hamas is seeking to gain any official Arab political recognition after the deterioration of its relations with other Arab countries in the wake of the failure of the Arab Spring revolutions.

Abdullah Abdullah, a member of the Fatah Revolutionary Council, told Al-Monitor that the Abbas-Haniyeh meeting was a mere protocol meeting. He stressed, however, that the Algerian efforts to try to put an end to the internal Palestinian division are appreciated and still on the table.

Abdullah added that his movement is ready to proceed with reconciliation, and he blamed Hamas for obstructing the process as it is bound to countries that support it, such as Iran, and follows the lead of the Muslim Brotherhood.

He called on the Palestinian people not to lose hope in the possibility of achieving reconciliation, despite the setbacks experienced in previous rounds and the inability of the two movements to reach an agreement to end division.

Asked whether the delegations of the two movements discussed ending division during their meeting with Tebboune or held other meetings away from the media, Hamas spokesman Hazem Qassem told Al-Monitor they did not.

Qassem accused Abbas of obstructing the internal reconciliation with a set of conditions, including asking Hamas to recognize Israel and the agreements the PA signed with it, and to agree to the political program of the PLO.

He stressed that his movement is seriously tackling the Algerian efforts to achieve reconciliation and that the hospitality Haniyeh received and the meetings he held with official and popular figures are proof of Algeria’s conviction of the movement’s clout in the Palestinian political system.

For its part, Hamas said in a statement issued on July 4 that Haniyeh and his accompanying delegation arrived in Algeria upon an official invitation from Tebboune. Hamas’ senior spokesman Sami Abu Zuhri commented on the meeting by saying, “The delegations of the Hamas and Fatah movements, headed by the mujahid brother Ismail Haniyeh and President Mahmoud Abbas, met under the auspices of the Algerian president, Abdelmadjid Tebboune.”

More than six agreements and dozens of meetings between the two movements failed to end the internal division that erupted in June 2007 following internal fighting between Fatah and Hamas in the Gaza Strip, which resulted in Hamas taking over the Gaza Strip and expelling the PA from it.

Imad Beshtawi, head of the Political Science Department at Hebron University, told Al-Monitor that the Palestinian dispute is too deep to be ended by handshakes facing cameras let alone by political courtesies on the part of Palestinian leaders.

He explained that all the agreements that took place between the two movements since 2007 and in many Arab and Western countries failed to achieve reconciliation, as he noted that both parties hold on to their field and political control. Hamas, he added, is seeking to remain in control of the Gaza Strip, while Fatah is seeking to keep the West Bank under its control.

Beshtawi ruled out any real breakthrough in the reconciliation file in the near term, as he pointed out that the financial and political support offered by some countries — which he refused to name — to both movements only contributes to deepening the division.

Mustafa al-Sawaf, a political analyst close to Hamas and former editor-in-chief of the local Felesteen newspaper, told Al-Monitor that the two sides only wanted to court the Algerian president by shaking hands in front of the cameras.

He said the main problem lies in the conditions that Abbas sets for reconciliation, which he says Hamas rejects. Chief among these conditions, he said, is the recognition of Israel as well as the agreements signed between the PLO and Israel.

Sawaf concluded by saying, “As long as President Abbas clings to such conditions, there seems to be no prospect in the near future for such a reconciliation, and reconciliation will seemingly not be achieved until after the death of Abbas and the end of his political project.”

The Palestinian street received the Abbas-Haniyeh handshake with utmost bitterness, as it is tired of such handshakes and meetings. This was reflected by some social media comments, which unanimously agreed that the internal division harmed the Palestinian cause and led it to lose its Arab momentum.