Is Erdogan trying to split NATO with his East Med gambit? 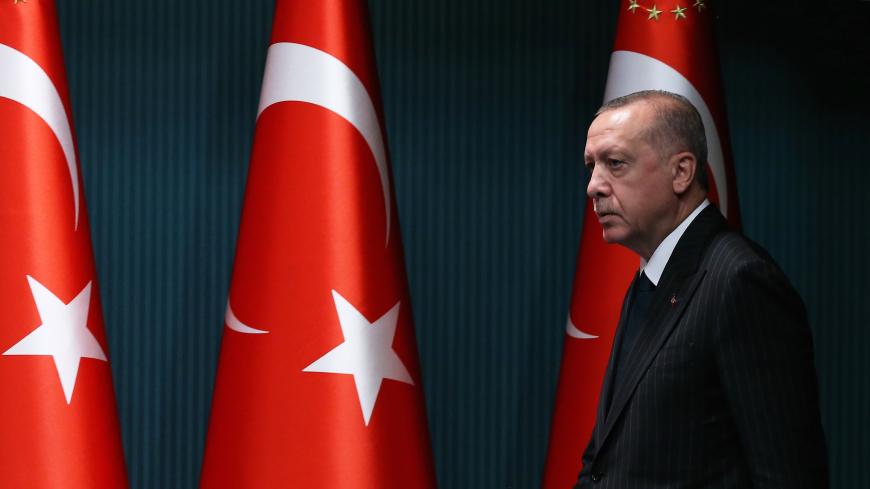 The celebration commemorating the anniversary of the 1071 Seljuk victory over Byzantine armies turned into a display of nationalist frenzy, which indicates Turkish President Recep Tayyip Erdogan’s increasing need to consolidate his support base by expansionist and aggressive foreign policy.

The Battle of Manzikert took place 949 year ago. In 1071, the Seljuks, the Ottomans' predecessors, defeated the mainly Greek forces of the Byzantine Empire — a victory commemorated in Turkey as the beginning of the gradual Turkification of Anatolia. However, this year’s celebrations were different. All brouhaha surrounding the occasion were washed with chauvinistic metaphors.

Erdogan, accompanied by his wife and his ultranationalist ally Devlet Bahceli, leader of the Nationalist Movement Party, took to the stage Aug. 26 to deliver a belligerent speech mainly targeting Greece amid the escalation in the eastern Mediterranean.

Aside from his speech, his messages on Twitter were equally belligerent. One of the metaphors Erdogan invoked in a tweet was referring to the concept of “Red Apple” that is considered as the most important symbol of Turkish nationalism and expansionism. The Red Apple is a symbol of a pan-Turkic movement that aims to unite the Turks in every corner of the globe in order to gain global supremacy. The concept lies at the heart of Turkish expansionism.

Erdogan’s use of this metaphor would have been deemed a casual reference had it not been for Fahrettin Altun, his communication director, reiterating it. In a tweet commemorating the anniversary, Altun wrote, “For us, the Red Apple means a great and strong Turkey. It is the sacred march of our nation that made history from Manzikert to July 15 [botched coup attempt in 2016]. … The Red Apple is what the entire humanity has longed for from Gibraltar to Hedjaz, and from the Balkans to Asia.”

In addition, the video clip that has been produced for the occasion by the Directorate of Communications also glorified the Red Apple concept. The clip featured pictures of the Kaaba in Mecca and Al-Aqsa Mosque in Jerusalem, with a frenetic march playing in the background.

All this frenzy represents the character and the discourse of the current character of the regime in Turkey: ultranationalism with some Islamic dressing. In Turkey, nationalism, in its essence, has never been exclusive to Islamism. The nationalistic characters of the successive governments before the ruling Justice and Development Party (AKP) had a secularist component. In 2020, however, Erdogan’s autocratic regime can be identified with Turkish nationalism that harbors Islamist elements. This constitutes a contrast with the Western media’s description of Erdogan as an Islamist.

The mounting tensions in the eastern Mediterranean is a reflection of this ideology. Erdogan espouses his ambition in the region with the Blue Homeland doctrine — a concept initiated by former secularist naval officers in 2006.

He borrowed the doctrine from secularist military elites who call themselves “Eurasianists” and are known by their avowed hostility toward NATO and the European Union. They advocate that Turkey should take its place in a new axis to be formed with Russia and China. The controversial maritime deal signed with Libya’s Tripoli government in November 2019 has been the first step toward the implementation of the Blue Homeland concept.

For the advocates of the concept, there is not much to talk about with Greece. At the end of the day, it is a matter of geopolitics and supremacy in the eastern Mediterranean. For retired Gen. Ismail Hakki Pekin, for example, the collision with Greece is ultimately inevitable because Turkey “needs to prove its strength, for it is impossible to reach a deal with Greece at the negotiating table.”

Erdogan gradually adopted a similar belligerent tone with these secularists, and his Manzikert speech was one manifestation of it. He took the occasion to lambast Greece through the ancient memory of Manzikert.

He said Greece has failed to “learn its lessons” from history. “We are the real owners of these lands, not the custodians," Erdogan said. He also accused Greece of “unwarranted bullying” in the Aegean Sea.

Erdogan struck a similar tone in an earlier statement snapping at the EU’s criticism of Turkey’s actions in the eastern Meditarrenean and some EU countries’ support of Greece. Accusing the bloc of “hypocrisy,” Erdogan said, “Nobody in the world deems the EU as a unity of values and principles anymore.”

The irony is that there is no mediator or interlocutor in the eastern Mediterranean conflict other than the EU. Indeed, German Foreign Minister Heiko Maas has recently engaged in shuttle diplomacy to ease the tension.

Speaking in Athens Aug. 25, Maas said, “The current situation in the eastern Mediterranean is equivalent to playing with fire” and warned that “every small spark can lead to a catastrophe.”

It looks like Maas did not achieve much in Athens and Ankara as the conflicting parties are upping the ante through military drills in the contested waters.

The region is very combustible indeed, with France joining the joint naval exercises Aug. 26-28, with Greece, Cyprus and Italy. Turkey, in turn, has been conducting military drills and continuing its seismic research in the area.

Any collision between Turkey’s warships and the Greek and French naval forces may spell the end of NATO, since all of these countries are NATO members.

This should not come as a surprise for French President Emmanuel Macron who recently said, "What we are currently experiencing is the brain death of NATO."

Turkey is getting increasingly lonely in the brewing eastern Mediterranean maelstrom. In the absence of domestic deterrence, namely a strong opposition, Erdogan with his rising nationalistic temper could care less, as his main focus right now is domestic gains. With his anti-Greek nationalism — similar to the anti-Kurdish one — Erdogan is self-confident that he can rally a significant section of the Turkish population around his leadership. When it comes to national(ist) matters, the opposition in Turkey is either subdued or neutralized.

International diplomatic isolation cannot deter Erdogan either. “But a cornered Turkey is a dangerous Turkey … Ankara is willing to take significant economic hits and diplomatic losses, and even, in the words of Erdogan last month, to 'sacrifice its entire being,' including lives, to become a regional superpower,” Haaretz wrote in an accurate assessment.

Moreover, it should never be forgotten that expansionist and aggressive nationalism is a typical foreign policy course that autocratic regimes take when confronted, especially in domestic policy. Turkey having a populist-nationalist leader at the helm who is playing with fire can quickly provide the spark to start a regional fire over the eastern Mediterranean.