White House calls for cease-fire as Egypt-Turkey rivalry spills over into eastern Mediterranean. 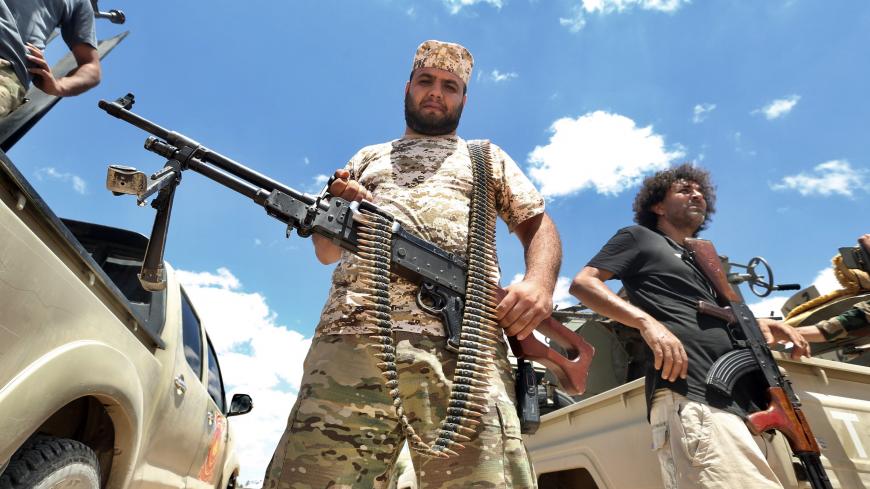 The Trump administration waded even deeper into the Libya conflict this week, backing UN calls for a cease-fire amid the many factions, and signaling again that the country’s oil fields are off limits to those seeking to profit on the war.

The US initiative is well timed, with signs of an escalation of fighting between the Libyan Government of National Accord, which is recognized by the UN and backed by Turkey, and the insurgent forces of former general Khalifa Hifter, who has the support of Egypt, the United Arab Emirates, Russia and France.

Libya’s also become the world’s most dangerous proxy war, ground zero in an increasingly militarized regional contest between Cairo and Ankara that is spreading to the eastern Mediterranean and to Turkey’s borders.

And then there’s Russia, which, while backing Hifter, has also sought to position itself as broker of an eventual settlement, with its eyes apparently on a cut of Libyan’s oil revenues.

US national security adviser Robert O’Brien waded into the morass this week, releasing a statement Aug. 4 that “as an active, but neutral, actor, the United States is pursuing a 360 degree diplomatic engagement with Libyan and external stakeholders” to bring about a cease-fire under the UN 5+5 military talks.

As we wrote here last week, US President Donald Trump’s summit-level diplomacy with all of the key players could position the United States to get a political process on track.

It also positions the United States as a key player in the region. That was clear when the Trump administration drew the line on Libyan oil — a message directed at Russian President Vladimir Putin, as well as Hifter.

After Russian mercenaries, known as the Wagner Group, moved into a Libyan oil field, the US Treasury sanctioned Wagner financier Yevgeniy Prigozhin for sanctions evasion while citing Wagner’s involvement in Libya.

Washington has also threatened sanctions on Hifter, a US citizen, if he looks to profit from Libya’s oil fields. Hifter’s base of support is in eastern Libya, where some of the key oil fields are located.

On Aug. 6, the Trump administration sanctioned a network of fuel and drug smugglers involved in Libya. US Secretary of State Mike Pompeo said the United States “will take concrete actions in response to those who undermine Libya’s peace, security or stability.”

The US moves can’t come too soon. The Turkey-Egypt battle for influence has become regionalized, and militarized, spilling over into the eastern Mediterranean, as Hagar Hosny reports.

Obrien said that the “efforts of foreign powers to exploit the conflict … undermine the collective security interests of the United States and our allies and partners in the Mediterranean region.”

In November 2019, Turkey and the Government of National Accord reached an agreement on offshore gas exploration. Egypt, Cyprus and Greece (and Israel) opposed the deal as an infringement on their rights for exploration and development; the European Union took their side.

Last month Egypt and France, clearly signaling their position, carried out joint naval training exercises in the eastern Mediterranean, as did Turkey.

In a further sign that Turkish President Recep Tayyip Erdogan considers the eastern Mediterranean a new frontier, this week Turkey reached a joint agreement with Libya and Malta to strengthen cooperation with the Government of National Accord.

In a phone call with Pompeo, Egyptian Foreign Minister Sameh Shoukry described Egypt’s "steadfast stance" on Libya and a path toward a peaceful settlement based on the Cairo declaration, which has so far gotten little traction in Ankara or Tripoli.

In response to Turkish actions in Libya and the eastern Mediterranean, Egyptian President Abdel Fattah al-Sisi has taken the fight to Turkey’s borders.

This week Egypt and Greece signed a maritime deal that outlines an exclusive economic zone for oil and gas drilling rights.

In Syria, the Egyptian government has deepened ties with the primarily Kurdish Syrian Democratic Forces, which Erdogan considers a terrorist-linked group, and has reportedly sent Egyptian troops to Syria, as Fehim Tastekin reports.

In Iraq, Egypt has condemned Turkey’s military operations in the north against Kurdistan Workers Party bases, while broadening political and economic ties with Baghdad.

Putin wants it both ways

The United States isn’t the only outside player positioning for power. Putin has managed to be both a partisan in the Libya conflict and potential broker of a deal.

Russia has until now backed Hifter, but this relationship is more handshake than embrace. As Kirill Semenov wrote here in May, “Amid the commander’s [Hifter’s] setbacks in the campaign to seize Tripoli, the Kremlin is growing increasingly wary of his behavior, which is resulting in Russian attempts to find other, more reliable figures on the Libyan playing field.”

Putin has also kept up the diplomatic action, engineering a joint statement last month committing Turkey to de-escalate the conflict and pursue a "political dialogue" via the United Nations referencing January's Berlin conference, which included representatives of all the key parties to the conflict.

Russia has also been selling weapons to both Turkey and Egypt, as George Mikhail reports.

The upshot? Time is right for a deal

The United States making clear that Libyan oil is staying in place until a deal is worked out should give Putin and Hifter pause in their rush to profit on the war. Trump has already shown he is willing to use sanctions, so they know he’s serious.

Putin has coveted another entry into the Mediterranean, and the Egypt-Turkey contest for influence can be a win for him, unless the United States blocks his moves. He has expanded the Russian naval facility in Tartus as a result of the Syria war. Libya, so far, has been a penny stock investment via his mercenaries, as well the usual frenetic diplomacy, which he seems to relish.

With the moves this week, Trump may have seized the diplomatic advantage from Putin, while raising the costs on the Russian leader’s Libyan ambitions.

The Trump administration is well placed to get the key parties to back down. As we wrote last week, Trump has good connections with all the key players — Putin, Sisi, Erdogan, French President Emmanuel Macron and Abu Dhabi Crown Prince Mohammed bin Zayed.

“All [these leaders] operate by personal connection and the action moves when they talk,” we wrote. “The risks of escalation remain high, but the tele-diplomacy has the potential to energize the UN Security Council — especially if Trump, Putin and Macron get on the same page — for an active role in bringing an overdue reprieve to the Libyan people.”