Turkey and Russia have ordered a cease-fire be reached in Libya in a sign that neither wants a confrontation in the oil-rich North African state where they support opposing sides. 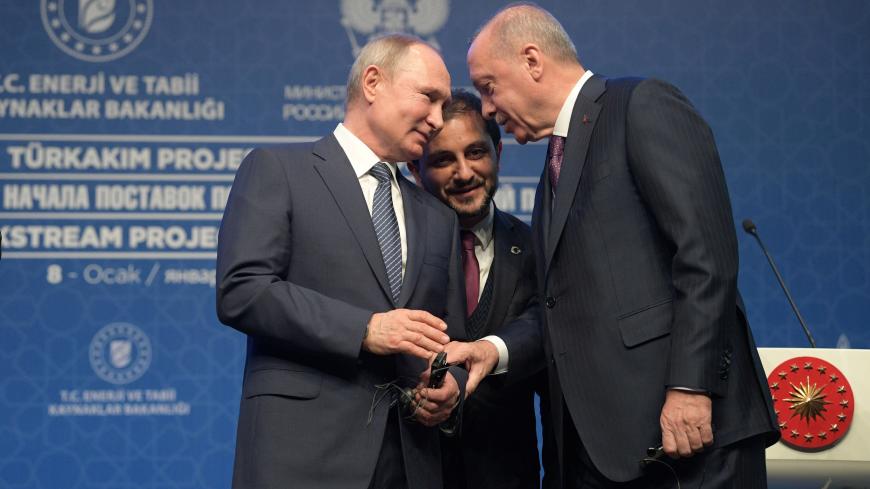 Ankara and Moscow have called on the warring parties in Libya to reach a cease-fire agreement by midnight Jan. 12. The call, made in a joint statement by Turkish President Recep Tayyip Erdogan and Russian President Vladimir Putin, is a clear signal that neither power wants to lurch into confrontation in the oil-rich North African state where they are supporting opposing sides.

The demand was made on the sidelines of a pomp-filled ceremony to inaugurate the TurkStream, an undersea pipeline that will carry natural gas from Western Siberian fields to Turkey and on to Europe. Erdogan seized the occasion to shower Putin with compliments, repeatedly calling the Russian leader "my valued friend” and crediting him as the architect of the megaproject that will further intertwine the historic Black Sea rivals.

“This year we celebrate the 100th year of the establishment of relations with the Russian Federation. We harnessed a very special growth [in relations] with the esteemed Mr. Putin.”

Erdogan’s effusion was a further sign of efforts to appease Putin as Turkey finds itself facing mounting censure over its military intervention in Libya in favor of the Tripoli-based Government of National Accord (GNA).

Erdogan revealed in a Jan. 5 interview with CNN Turk that Turkish forces have begun deploying to Libya. He insisted that the forces, who will be under the command of a Turkish lieutenant general, were being dispatched not for combat but for an advisory role. He did not offer any figures. In an obvious sop to Putin, he stressed that Turkey would not be involved in the so-called Berlin process to resolve the Libyan conflict unless Russia took part.

The deployment follows authorization from the Turkish Parliament to send troops to the former Ottoman dominion. The move rests on a November agreement struck between Turkey and the GNA, led by the Muslim Brotherhood-friendly Fayez al-Serraj. Estimates vary but Turkey is believed to have transferred between 150 to 300 Sunni rebels from Syria to help the beleaguered Serraj fend off a recent offensive by the GNA’s rival, eastern warlord Gen. Khalifa Hifter.

Russia has been doing its fair share of meddling with an estimated 2,500 mercenaries affiliated with the private security firm Wagner on the ground to help Hifter. The latter is also backed by Turkey’s regional foes the UAE, Egypt and Saudi Arabia as well as by France.

The United States and the European Union have increasingly embraced a hands-off approach as Hifter’s campaign has gained momentum since April. The push has freed space for Russia to wade in and tip the balance in his favor. On Monday, Hifter’s Libyan National Army announced it had entered Sirte, a key coastal city, seizing control of the al-Qaradabiya air base before advancing toward the city center.

In today’s speech, Erdogan reminded Putin, “In recent times we have not allowed our differences in views to overshadow our common interests.”

This idea has held true in Syria, where Turkey and Russia have cut deals despite backing opposite sides. A similar balancing act will be difficult to strike in Libya, held as critical by Turkey in its drive for regional economic and political heft. Today’s call for a cease-fire may be more of a bandage allowing both sides to win time, noted Kerim Has, a Moscow-based analyst of Russian-Turkish affairs.

He believes that any appeals for Russia to withdraw its support for Hifter will fall on deaf ears because the current environment is squarely in the general’s favor.

Wolfram Lacher, a Libya analyst at the German Institute for International and Security Affairs, believes there are various ways that Russia and Turkey could come to an understanding in Libya. But it will depend on the extent to which Turkey is prepared to increase its engagement, not for a battleground victory but rather to stabilize a balance of power in the field, Lacher told Al-Monitor. Erdogan has suggested that this is Turkey’s aim, all with a view to achieving peace in Libya. More likely it's to win a seat at the table when the country’s future is being decided.

Turkey is virtually the sole military power on the GNA’s side, providing it with drones, armored vehicles and now men. But physical distance makes it hard to be effective. Libya’s Maghreb neighbors Tunisia and Algeria have made it clear they will not allow themselves to become staging grounds for Turkish intervention.

Should either Russia or Hifter’s most influential backer, the UAE, scent that Turkey is neither willing nor able to make the necessary push to restore battleground parity, it could prompt them to escalate further.

Still, one thing Turkey and Russia could agree on is “to reduce direct engagement in the battlefield and refrain from directly targeting each other’s assets,” Lacher observed. “If they are more ambitious they could think of an Astana-type framework. You could then have Russia and Turkey trying to preside over power-sharing negotiations or divide up areas of influence that would in some way cement the division.” Astana refers to the Russian-led initiative with Turkey and Iran to allow the regime to reclaim rebel-held territory in exchange for Turkish license to pursue its Kurdish foes and to prevent a further influx of Syrian refugees.

Lacher cautioned, however, “This more ambitious understanding will be very difficult to achieve, not least because of the difficulty of getting the Libyan parties to to agree among themselves.” The other hitch is that Russia will be loathe to alienate the UAE and Egypt.

Has agreed, saying, “An Astana-like arrangement in Libya seems unlikely because there are many more different players and the energy pie is far greater.”

The stakes are growing higher with Turkish claims on Eastern Mediterranean gas endorsed by the GNA in a maritime agreement, further escalating tensions with Egypt, Greece, Israel and Cyprus, who are bent on building a pipeline to carry the gas to Europe. Turkey has vowed to block the move, dispatching its own drill ships and naval escorts off Cyprus.

Erdogan’s increasing appetite for risk, driven in part by an attempt to shore up his domestic standing, might well mean that Turkey will get further embroiled.

That will pose a dilemma for the UAE, argues Oded Berkowitz, deputy chief intelligence officer at MAX Security, a geopolitical risk consulting firm. “If and when Turkey decides to put bigger assets in place, attacking them will be difficult because the UAE has never admitted to helping Hifter, while Turkey is openly aiding the GNA on the basis of a formal agreement. As such, it's a gamble that benefits Turkey in the near term,” Berkowitz told Al-Monitor.

Berkowitz went on, “If you look at every move that Turkey has made so far it's very, very rational. For example, they have a leverage point with Europe over everything that has to do with refugees, and their ability to officially intervene in Libya adds another point of leverage over everything to do with refugees. Turkey is making bold moves to increase its power significantly and it's making progress in this regard.”