Turkey, Russia agree to work for truce in Libya as regional rivalry heats up

Despite backing opposing sides, Moscow and Russia have pledged to work toward a cease-fire in the North African country in a conflict that is fueling a complex maze of rivalries across the region. 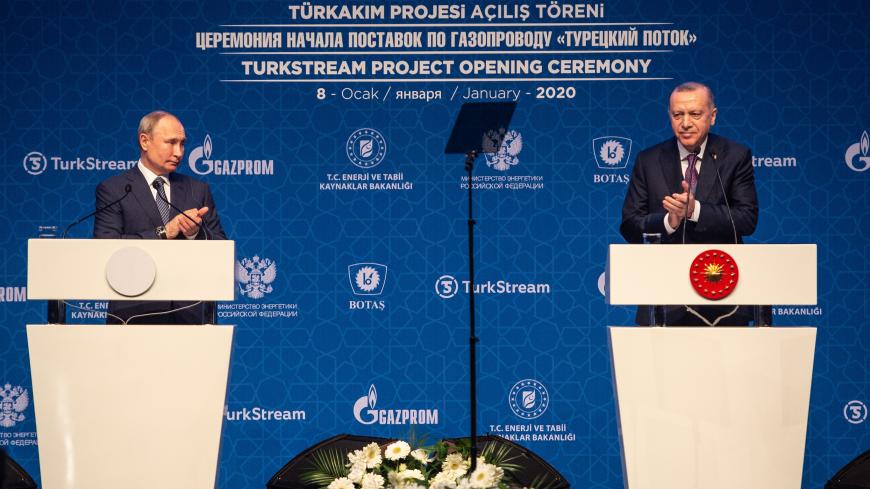 ISTANBUL — Turkey and Russia said they will push for a cease-fire in Libya, where they support opposing sides in a civil war, while tensions continue to escalate between Ankara and Europe elsewhere in the Mediterranean, exposing a tangle of competing alliances across the region.

Turkish and Russian officials meeting in Turkey’s capital on Wednesday agreed to continue working toward a truce for the North African state as well as facilitate dialogue between the warring parties and improve the humanitarian situation, the Turkish Foreign Ministry said in a statement.

Turkey entered the Libyan conflict in January on the side of the internationally recognized Government of National Accord, swiftly turning the fight against rebel commander Khalifa Hifter in the GNA’s favor despite Hifter’s support from Russia, France, Egypt and others.

In exchange for its military assistance, Turkey inked lucrative energy deals with the GNA last year that create an “exclusive economic zone” that stretches from Turkey’s Mediterranean shore to Libya’s coast, infringing on Greek and Cypriot territorial waters.

This week, a Turkish ship began surveying near the Greek island of Kastellorizo, which is less than five miles off the Turkish coast. Greece accused Turkey of violating its sovereign rights. Turkey is also exploring for hydrocarbons in waters claimed by Cyprus.

While Russia and Turkey fell short of agreeing to a cease-fire, their cooperation may be troubling others in Europe. Turkish President Recep Tayyip Erdogan and his Russian counterpart Vladimir Putin have promoted their close ties in recent years despite a spate of strategic differences from the Mediterranean to the Middle East to the Caucasus.

French President Emmanuel Macron, who has repeatedly blasted Turkey’s Libya policy, warned on Thursday the European Union must not cede the Mediterranean Sea to “other actors” and demanded the bloc impose additional sanctions on Ankara for violating Greek and Cypriot maritime boundaries this week.

“What’s at stake is a power struggle, in particular of Turkey and Russia, which are asserting themselves more and more and in the face of which the EU is still doing too little," Macron said before talks with Cypriot President Nicos Anastasiades, pledging full support for both Cyprus and Greece.

Turkey appears to be calling “Macron’s bluff,” Timothy Ash, a senior strategist at Bluebay Asset Management, said in a research note to clients. “Can Macron secure unanimity for such actions within the EU, when many countries still see bigger strategic interests demanding engagement with Turkey [including] migrants, counter-terrorism, countering the threats from Russia and Iran and trade?”

US President Donald Trump, who has largely watched the Libyan quagmire from the sidelines, appears to now be exercising some diplomatic muscle. Trump and Erdogan pledged last week to “work closely” on Libya in a phone call, and on Monday, the US leader spoke with Erdogan’s foe, Egyptian President Abdel Fattah al-Sisi. Trump and Sisi agreed to work for a Libyan cease-fire, even as the Egyptian Parliament voted to send troops next door.

Turkey, and possibly the United States, may prefer to see a cease-fire after the GNA gains more ground. The GNA could soon take the strategic town of Sirte, the gateway to Libya’s eastern oilfields. Erdogan’s adviser Ibrahim Kalin told Reuters after talks with Russia that a cease-fire would require Hifter’s forces to pull back from Sirte, as well as the town of Jufra.

“The process is shifting in Libya, with the United States’ intervention. The US is trying to mediate between Turkey and Egypt and encourage Turkey to progress further, while trying to convince Egypt not to intervene. It appears the initiative in Libya is being taken away from Russia,” said Ozgur Unluhisarcikli, director of the German Marshall Fund in Ankara.

Turkey remains attuned to pressure from Moscow. The two sides are also at odds in Syria, where Putin supports President Bashar al-Assad and Erdogan backs opposition fighters, and have been drawn into occasional confrontations. But they have also put aside differences to secure a series of cease-fire arrangements in Syria.

Last week, fighting in Syria’s Idlib province, including Russian airstrikes, prompted some speculation that Moscow was endangering a four-month truce to send Ankara a message on Libya.

Tensions also flared in the Caucasus this month, when fighting broke out between Turkey’s close ally Azerbaijan and its foe Armenia, traditionally backed by Moscow. On Thursday, Armenia conducted joint air defense exercises with Russia, said the Defense Ministry spokesperson in Yerevan.

Erdogan and other Turkish officials pledged full support, including weaponry, to Azerbaijan in a departure in tone from their cautious stance on its long-running conflict with Armenia.

“As the United States changes its position on Libya and moves closer to Turkey’s, while still maintaining a mediation position, Turkey has accepted this role, likely angering Moscow,” said Unluhisarcikli. “If you ask me, Russia is giving its response in the Caucasus.”