The United States pledged support for Libya's electric company amid continued blackouts in Libya, which are fueling popular unrest. 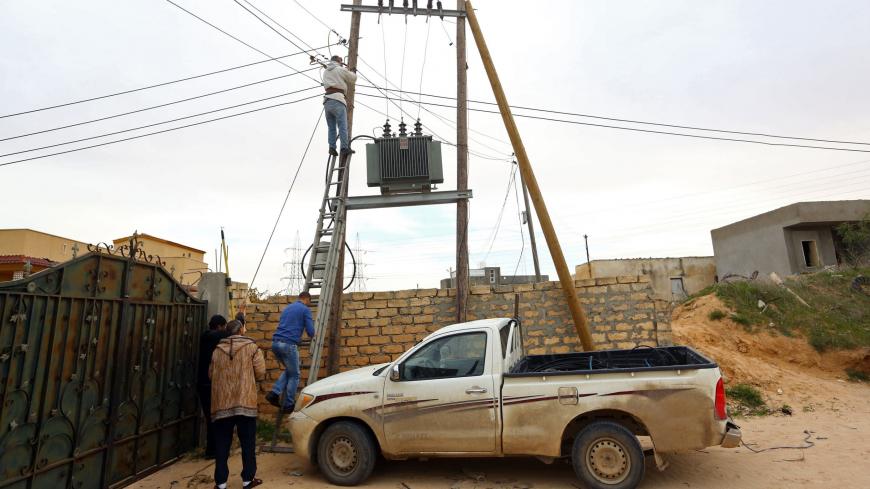 An employee of the General Electricity Company fixes cables in the Libyan capital, Tripoli, on Jan. 19, 2017, as power cuts struck the south and west of the North African country twice during the week due to production shortages and a spike in demand due to a cold snap. - MAHMUD TURKIA/AFP via Getty Images

As part of the Economic Working Group for Libya, representatives of some 10 countries, the European Union, the African Union, the Arab League and the UN sat down with leadership of Libya’s main electricity company amid widespread protests in the war-torn country over power blackouts and decreased quality of life.

Stephanie Williams, the special representative for the UN’s mission in Libya, and the head of the Economic Working Group for Libya, EU Ambassador Jose Sabadell, spoke Monday with the deputy head of the General Electricity Company of Libya, Abdul Salem al-Ansari, about proposals to reduce the blackouts, some of which last longer than 16 hours per day in some areas, the UN said in a statement.

Al-Ansari said that tax revenues were not being channeled to the electricity company and that it would not be able to provide adequate power without them. The UN called the power outages “unacceptable.”

Representatives from several countries, including Egypt, Italy, France, Turkey and the UAE, attended the meeting. US Ambassador to Libya Richard Norland took part and pledged US support for the electricity company’s "efforts to end the electricity crisis,” according to the State Department.

Why it matters: Libya’s worsening electricity crisis has helped to fuel popular protests on both sides of the country’s civil war, amid international efforts at building a sustainable peace between the two sides.

Eastern Libya’s Gen. Khalifa Hifter’s blockade since January of oil exports has cost the country more than $9 billion in revenue, according to the Tripoli-based National Oil Corporation. Hifter said last week he would lift the blockade for one month.

What’s next: The electricity company has long been under fire for its inability to provide adequate power. The company has pointed to the security situation, including kidnappings of employees, as a main reason why foreign contractors refuse to partner with the company’s operations.

The Italian multinational Eni said in July that it is exploring options to develop a gas power plant in Libya with the Libyan electricity company. Last month, the Libyan company's representatives met with board members of the Turkish conglomerate Kalyon Group to discuss options for building a solar plant in Libya.

Serraj’s government faced pressure to raise the electricity company’s funding that month after a new board was appointed, but the blackouts have only continued.

Know more: Diego Cupolo examines what Serraj's proposed resignation means for the future of Turkey's influence in the conflict.