The Palestinian response to the normalization agreement between the United Arab Emirates and Israel is loud but its message is muddled amid divisions at home and in the region. 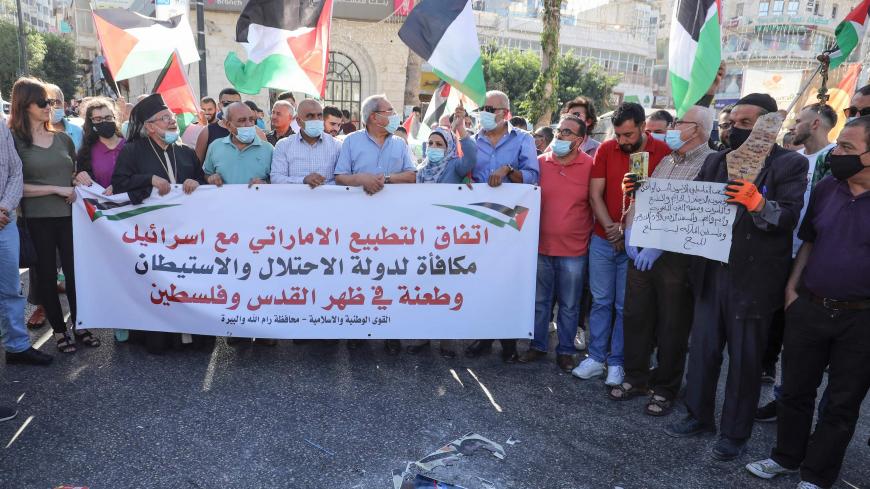 Palestinian protesters lift a banner during a demonstration against the Emirati-Israeli agreement in Ramallah in the occupied West Bank, on Aug. 15, 2020. - ABBAS MOMANI/AFP via Getty Images

The Palestinian leadership has vocally opposed the recent UAE-Israel rapprochement, demanding a reversal of the decision or at a guarantee that no other Arab country will follow suit.

The Palestinians have called for urgent meetings of the Arab League and the Organization of Islamic Cooperation, both of whom have unanimously and repeatedly supported the Saudi-headed Arab Peace Initiative. The UAE move to normalize relations before Israel commits to withdrawing from all Arab territories occupied in 1967 violates the most important clause in the plan.

The Palestinian leadership has reached out to its Islamic rivals, who agreed to coordinate public protest activities under the Palestinian flag. A meeting was scheduled for the evening of Aug. 18 at the presidential headquarters in Ramallah, and the Hamas and Islamic Jihad leadership expressed willingness to discuss strategies to counter the UAE move.

Jibril Rajoub, head of the Fatah Central Committee, has been spearheading the Palestinian protests. He held a joint press conference in July with his Hamas counterpart in Beirut. Rajoub, who spent 19 years in Israeli prisons, has strong relations with the opposition Islamic movements and they have expressed public support and respect for him.

Israel’s Prime Minister Benjamin Netanyahu and the US president’s son-in-law, Jared Kushner, have repeatedly talked about the potential influx of Muslims that will fly to Israel to pray at Al-Aqsa, Islam’s third holiest mosque. Grand Mufti of Jerusalem Sheikh Muhammad Ahmad Hussein issued a religious edict reiterating an earlier fatwa forbidding Emiratis to visit and pray at Al-Aqsa.

The Palestinian leadership, which recalled its ambassador from Abu Dhabi, has vowed to boycott the Dubai Expo scheduled for October 2021.

Protesters have burned photos of Emirati Crown Prince Mohammad Bin Zayed, calling him a traitor to the Palestinian cause. Critics call the deal a knife in the back of Palestinians and say that it runs contrary to what his father, the late Zayed bin Sultan, founder of the UAE and a strong supporter of the Palestine cause, would have done.

There are signs the Palestinian leadership, which had given lukewarm support to the Boycott, Divestment and Sanctions movement, will change course and fully support the movement. A BDS statement against the UAE move was featured prominently on the website of the official Palestinian news agency, Wafa. The Palestinian press is tirelessly covering local, regional and international opposition to the UAE's actions.

But amid the displays of resistance, there is concern about the potential high costs to Palestinians working in the Emirates.

Ironically, the Palestinian sentiments against the UAE has dented support for renegade Fatah leader Mohammad Dahlan, who is based in the Emirates. While Dahlan has not been seen or heard from during the current crisis, his name has been besmirched nevertheless and his Palestinian opponents seem to feel vindicated.

The UAE move has complicated the Palestinian leadership’s strategic options. President Mahmoud Abbas, who has consistently opposed what he calls the “militarization” of protests and has spoken out publicly against what he called the “amateur” Hamas rockets, has focused all his efforts on the diplomatic track and the Arab Peace Initiative. With this dent in the Arab consensus around the plan, it is unclear whether the Palestinian efforts can stop a domino effect of other countries like Bahrain, Oman, Morocco and Sudan from following in the UAE's footsteps.

Israeli Foreign Minister Gabi Ashkenazi has held a phone call with his Omani counterpart, who also called Fatah’s Rajoub, but so far it seems unlikely that any other Arab country will make a move before the US presidential election.

The Palestinian response has been highly visible but it is unclear what real options are available to the Palestinian leadership at a time of inter-Arab strife and division. The various Palestinian parties insist that Israel must work with the Palestinians themselves no matter what a faraway emirate does.