A significant revamp promises to slim down the Omani government, bring in new faces and mark the start of a new era. 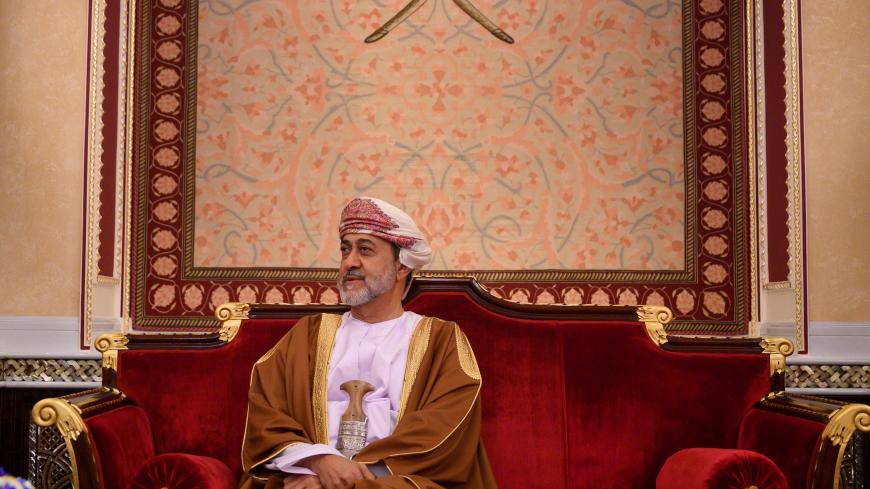 “We were holding our breath [for] this day to come!” Buthaina Al-Jabri, the co-founder of the Omani students union in the United Kingdom, told Al-Monitor. On Aug. 18, Oman's new ruler Sultan Haitham restructured the government.

Upon his ascent to the throne in January, Haitham pledged to “undertake necessary measures to restructure the state’s administrative apparatus.” Omani researcher in political sociology Mubarak Al-Hamdani told Al-Monitor he believes the new ruler is pursuing policies recommended by the national strategy Oman 2040.

“The old style was not working anymore,” Al-Jabri commented.

In Kumzar, an isolated village accessible only by boat in the country’s northernmost tip, people are “happy” with the announcement, said one enthusiastic fisherman over the phone.

Such enthusiasm could, however, turn into disappointment if expectations are not met. Young Omanis who have previously accused the government of making false promises are “not going to forgive slow actions," warned a woman in Muscat, also over the phone. "They will be watching.”

High youth unemployment is one of Oman's most pressing internal issues.

Commenting on the new government and Haitham’s reforms, Omanis interviewed by Al-Monitor praised the retirement of ministers who have been in office for decades, the presence of new faces and a shift toward technocrats with solid qualifications.

“In the past, many appointments were based on tribalism,” said one young man in a phone interview.

In June, a newly formed sovereign wealth fund took over most of Oman’s state-owned entities to reduce bureaucracy, consolidate public assets and trigger a change in those companies by gradually “exiting a public servant mindset.” The new minister of commerce, industry and investment promotion has long been a voice of private sector interests in the country.

“The changes brought in by Sultan Haitham have been greeted very positively in the business and wider community,” Mac Thomson, CEO of Oman-based hotel management company MMIS, told Al-Monitor.

Beyond improving efficiency, slimming down the administration is part of a broader strategic shift to tackle a spike in public debt since the 2014 oil bust, the sultanate’s increasing reliance on external loans and a fading social welfare system.

Hit hard by the COVID-19-induced recession and low oil prices, Oman is heading for one of the biggest budget deficits in the Gulf. Credit rating agency Fitch Ratings forecasts the country’s fiscal deficit as nearly 20% of gross domestic product (GDP) in 2020.

Talking to Al-Monitor, Alexandre Briand, president of the Paris-based Club France Oman, praised the willingness of the new Omani leadership to increase foreign direct investments (FDI). “I see this as a great opportunity for French investors and companies to increase economic partnerships with the Sultanate,” Briand told Al-Monitor.

Foreign investors have long lamented the slow pace of Oman's decision-making and called for drastic improvements in the business and legislative environment.

“We are looking forward to more FDI-friendly policies,” said Cheng Wang, commercial attaché at the Chinese Embassy to Oman, welcoming the “positive sign” of the government restructuring. “The five critical non-oil sectors primed by Vision 2040 would witness a deep engagement of Chinese companies and investors,” Wang told Al-Monitor.

“We are ready to work with the brand new Ministry of Commerce, Industry and Investment Promotion to expand the export of Omani non-oil products to China,” he added.

Delegation of authority and royal family

At the time of his death, Sultan Qaboos bin Said held almost all of the sovereign portfolios. “Qaboos wielded an exceptional degree of autonomy and authority within the Omani power structure,” wrote Kristin Smith Diwan for the Arab Gulf States Institute in Washington.

But as experts have predicted, the era of highly centralized governance is coming to an end. On Aug. 18, Haitham gave up the foreign and financial affairs portfolios, making room for more inclusive decision-making. “This is an important shift in the delegation of authority,” political sociology researcher Mubarak Al-Hamdani commented to Al-Monitor.

In line with the current practice in most Gulf countries, the royal family is also likely to play a more active role. Notably, Haitham appointed his son as minister of culture, sports, and youth and his brother as deputy prime minister of defense.

In the past decade alone, Oman provided a venue for secret talks between Tehran and Washington ahead of the 2015 nuclear deal, welcomed Israel’s prime minister amid a rapprochement between Gulf leaders and the Jewish state and refused to join a military intervention in Yemen as well as the embargo imposed on Qatar since 2017.

End of the Qaboos era

However, current economic realities could lead to “a more pragmatic foreign policy” and bring the Sultanate closer to its Arab neighbors, Houchang Hassan-Yari, head of the department of political science at Sultan Qaboos University, told Al-Monitor.

Bloomberg revealed in a June 11 report that the erosion of Oman’s fiscal situation was discussed during high-level political meetings attended by Gulf officials. “Nothing has been decided” but Oman could seek financial assistance from its neighbors, the report stated.

“We might see a kind of refreshment with countries like the United Arab Emirates, Saudi Arabia and so forth,” said Hassan-Yari, adding that Oman is likely to play “a more active role” in the Gulf crisis between Qatar and its Arab neighbors.

“But it should not be interpreted as a completed departure from the past. … Oman has to maintain a professional relationship with the Iranian government,” Hassan-Yari said. The two countries share the Strait of Hormuz, the world's busiest oil waterway.

For more than two decades as foreign minister, bin Abdullah had patiently shaped Qaboos’ foreign policy, turning Oman into an internationally trusted mediator. The departure of the long-serving diplomat marks the end of Qaboos’ era and leaves the Gulf country challenged with achieving an administrative renaissance.