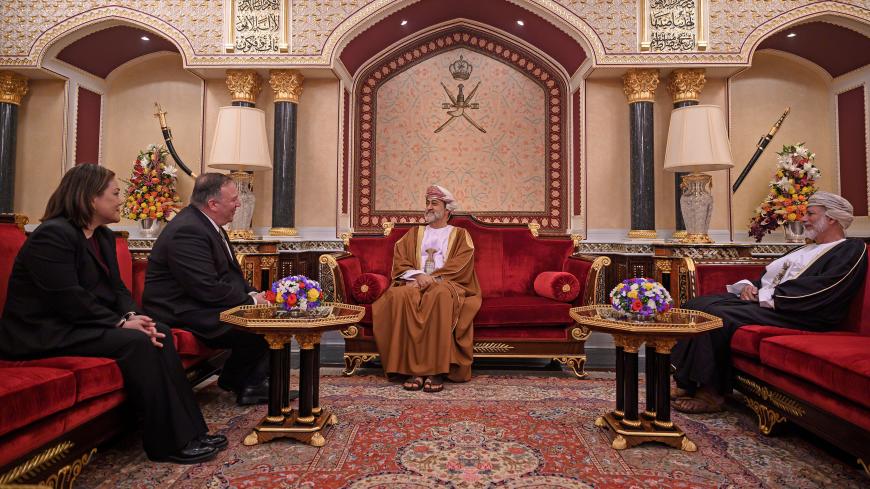 “I feel very proud to come from a peaceful country. Over the past 50 years, Sultan Qaboos taught us to build friendships, embrace differences, create bridges of peace and understanding to learn from others,” Omani politician Amna Al Balushi told Al-Monitor.

In an era of global political polarization, Oman stands out for the independent and non-aligned foreign policy it has been cultivating over decades. Strategically located between Iran, the United Arab Emirates, Saudi Arabia and Yemen, the sultanate has traditionally refused to choose sides but rather foster dialogue, stability and cooperation.

Ahead of the 2015 Iran nuclear deal, Oman provided a venue for secret US-Iran talks. Later, it refused to join a Saudi-led military intervention in Yemen that has taken more than 100,000 lives and chose to stay out of an embargo imposed on Qatar since 2017.

Ahead of the US secretary of state’s first visit to Muscat since the death of Qaboos bin Said Al Said, the Arab world's longest-serving ruler, Mike Pompeo’s office praised Oman’s diplomatic role.

Qaboos left a vital legacy in international relations. Houchang Hassan-Yari, head of the department of political science at Sultan Qaboos University, noted that Oman's foreign relations were minimal before Qaboos took power during a palace coup set up by British intelligence in July 1970.

Dhofar-based linguist Saeed Al Mahri believes that Qaboos’ foreign policy endeavors had "started locally" during a Marxist insurgency that destabilized the southernmost governorate and threatened Oman's unity from 1962 to 1976.

Though the monarch suppressed a rebellion by force following his accession to the throne — actively supported by Iranian and British military force — Qaboos also "engaged dialogue" and "promised to build a modern state," Al Mahri told Al-Monitor.

Nowadays, the country acts as a "facilitator" to help to resolve crises in the Middle East region. Mughairy said that she finds it an honor to represent the policy of her country to the United States. “I do it with pride as I am a strong believer in dialogue,” the diplomat said.

Oman’s foreign policy "stems from the country’s diverse tribal and sectarian makeup" and its core values are "ingrained in the Omani identity," said Manishankar Prasad, an Indian sociologist who grew up in the country.

The researcher said that the maritime sultanate has historically been a country open to international trade activities. “The current foreign policy is a reflection of the everyday life of Omanis, and naturally can’t be pro-Saudi Arabia or pro-Qatar,” he told Al-Monitor.

As Sultan Haitham bin Tariq Al Said’s reign begins, analysts wonder whether the new ruler will have the charisma to stand firmly against the aggressive foreign policies of other Gulf states. “Oman’s neighbors may view the death of Qaboos as a unique opportunity to advance their own expansionist agendas,” US-based Quincy Institute research fellow Annelle Sheline told Foreign Policy.

Oman faces growing pressure to choose sides in a number of matters and its close relations with Iran are a source of concern for the Gulf states, which promote a hard-line policy on the Islamic Republic while supporting a “maximum pressure” campaign led by Washington.

Oman’s Ministry of Foreign Affairs did not respond to Al-Monitor’s requests for comments.

In this environment, Oman's neutral orientation safeguards the sultanate from being squeezed between the conflicting ambitions of the Middle East’s major powerhouses. “From the perspective of my students, this foreign policy is a guarantor of security,” Hassan-Yari told Al-Monitor. Al Mahri asserted that Oman has refused to get involved militarily in Yemen "also to protect itself."

“This is the best option to follow,” said Sharifa Al Kindi, an Omani student of international relations at Sultan Qaboos University in Turkey for a student-exchange program. The regional context as well as Oman’s geographic location and economic and military capabilities "dictate the current foreign policy," she said.

Al Kindi expects neighboring countries to respect Oman's neutrality because it “serves as an open channel to mitigate regional tensions.” Amid a rapprochement between Saudi Arabia and Israel, Qaboos welcomed Prime Minister Benjamin Netanyahu in Muscat in 2018 for the first official visit by an Israeli leader since 1996.

'Just a small word can break it'

Those who travel or live abroad greatly appreciate the sultanate’s diplomacy. “No one hates us, to a great extent thanks to the Omani foreign policy,” said Al Mahri.

“Omani students living in the United States feel that they are safe because of the positive relationship between our two countries,” said Mughairy. The diplomat, who was the first Arab woman to be appointed ambassador to Washington in 2005, said that Oman will “continue to attach high value to its close friendship and partnership with the United States, just as it has since our two countries first made contact more than two centuries ago.”

“It is important to carry on with a foreign policy which results from nearly half a century of leadership. We promise to take Sultan Qaboos' teachings ahead to train the world,” Al Balushi added. A municipal councillor in Oman's Seeb since 2016, the politician said she was inspired by Qaboos' foresight to "build forward-looking relationships" and urges Sultan Haitham to perpetuate it. Yet, Al Balushi warned that relations can be fragile and “just a small word can break it, either at family, community or country level.”

In a bid to reassure the international community, Haitham pledged to follow Qaboos’ foreign policy. “We will remain as the world had known us,” the new ruler declared.

Hassan-Yari says that it will be “difficult to fill Sultan Qaboos’ shoes” in the short term. “Sultan Haitham will have to show that he is able to run the country,” he commented.

Economic realities could challenge Oman’s independent foreign policy as the sultanate relies heavily on hydrocarbon revenues to balance its annual budget and taps international debt markets to finance its budget deficit. Oman’s ratio of debt to gross domestic product, which has been multiplied by 12 since 2014, is rated as junk by the three major rating companies.

On March 9, oil prices dropped by nearly 25% following Saudi Arabia’s decision to flood the market with a record crude supply while the coronavirus saps global energy demand. Bloomberg reported that Oman is “the most vulnerable” Gulf state to current oil prices.