Former UN ambassador Nikki Haley said that Democratic nominee Joe Biden would be good for Iran and the Islamic State. 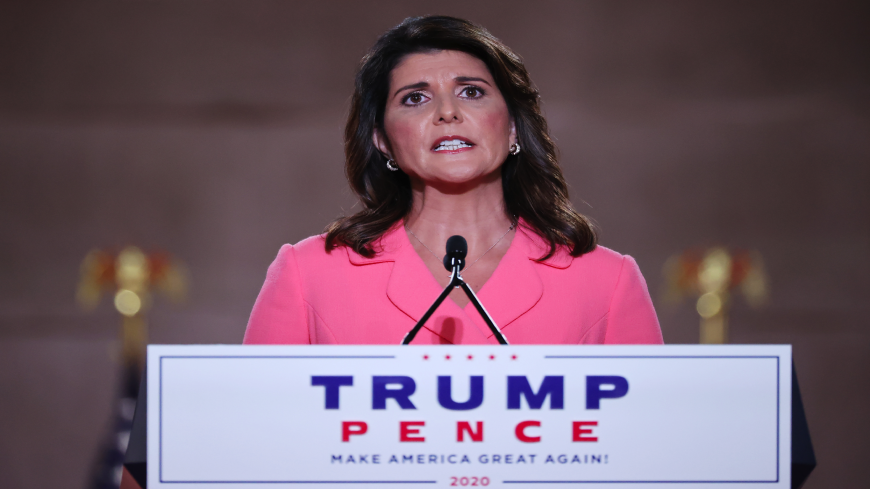 Former US Ambassador to the United Nations Nikki Haley stands on stage in an empty Mellon Auditorium while addressing the Republican National Convention at the Mellon Auditorium on Aug. 24, 2020, in Washington, DC. - Photo by Chip Somodevilla/Getty Images

The Donald Trump administration’s former UN ambassador, Nikki Haley, praised the president on his Israel and Iran policies to kick off the Republican National Convention on Monday.

Haley said that a victory by Democratic presidential nominee Joe Biden would benefit Iran and the Islamic State (IS).

“Joe Biden is good for Iran and ISIS,” she said, using an alternative name for IS.

The convention began on Monday and will finish Thursday with Trump’s speech to accept the Republican Party’s nomination for president. The Democratic National Convention was the week before. Republicans elected to not formulate a new platform at this year’s convention, citing the small number of people attending because of the COVID-19 pandemic. Trump’s agenda for a second term does not mention the Middle East specifically.

In her speech, Haley hammered Biden — the vice president under former President Barack Obama — for the 2015 Iran nuclear deal. The agreement removed sanctions on Iran in exchange for compliance on its nuclear program. The Trump administration left the deal in 2018 and is now seeking the return of UN sanctions on the Islamic Republic.

“Obama and Biden let Iran get away with murder,” said Haley. “President Trump did the right thing and ripped up the Iran nuclear deal.”

Haley also sought to cast Biden as unfriendly to Israel in the speech. Heavy US support for Israel continued during the Obama years, but Biden and his former boss sometimes disagreed with Israeli policy. In 2016, Obama broke with past practice and allowed the UN to condemn Israeli settlements in the Palestinian West Bank.

Haley contrasted the UN vote with Trump recognizing Jerusalem as the capital of Israel and her support for this at the UN.

“Obama and Biden led the United Nations to denounce our friend and ally Israel,” she said. “President Trump moved our embassy to Jerusalem, and when the UN tried to condemn us, I was proud to cast the American veto.”

The former diplomat also gave Trump credit for the defeat of IS by the US-led coalition and its Syrian and Iraqi allies.

“He took on ISIS and won,” said Haley.

The event unsurprisingly focused heavily on domestic issues, including police brutality and the related protests and riots. Activist Charlie Kirk and retired football star Herschel Walker were among the other speakers on day one. Haley also spoke about her parents’ experience as immigrants from India and her decision to remove the Confederate flag from South Carolina’s statehouse when she was governor.

US Secretary of State Mike Pompeo, currently visiting countries in the Middle East, will address the convention on Tuesday. Pompeo will likely discuss Iran, Israel and the Gulf in his speech.