US Secretary of State Mike Pompeo said Qasem Soleimani was responsible for killing US soldiers and other rogue actions in the Middle East. 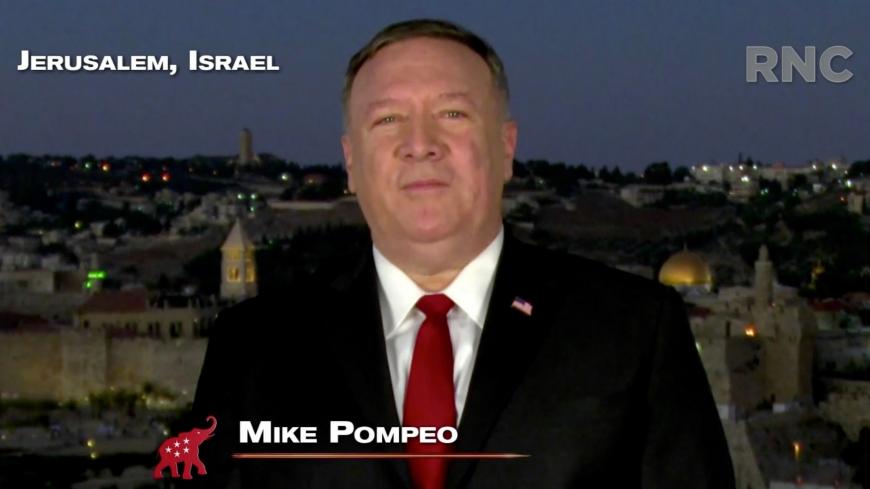 US Secretary of State Mike Pompeo praised the US killing of Iranian commander Qasem Soleimani in his speech to the Republican National Convention on Tuesday.

Speaking from the Old City of Jerusalem, the top diplomat said the January airstrike against the Islamic Revolutionary Guard Corps major general in Baghdad was just.

“When Iran threatened, the president approved a strike that killed the Iranian terrorist Qasem Soleimani. This is the man most responsible for the murder and maiming of hundreds of American soldiers and thousands of Christians across the Middle East,” Pompeo said.

The Middle East focused heavily in Pompeo’s address. He credited US President Donald Trump for the victory against the Islamic State (IS). With significant air support from the US-led coalition, Iraqi forces took IS’ last territory in the country in late 2017. The Kurdish-led Syrian Democratic Forces did the same in Syria in 2019.

Pompeo’s comments on the killings of US soldiers may refer to Iran-backed groups’ attacks on US troops following the US invasion of Iraq in 2003. Soleimani’s forces did not kill Christians en masse. However, Iraqi Christians attribute various forms of discrimination and displacement to militias supported by Iran in the country.

The 2020 election is dominated by domestic concerns, including the coronavirus and police issues. Iran and Israel are in the discussion, however. Pompeo said the 2018 US withdrawal from the Iran nuclear deal put pressure on Iranian Supreme Leader Ayatollah Ali Khamenei and on Iran’s allies Hezbollah in Lebanon and Hamas in Gaza.

“The president exited the US from the disastrous nuclear deal with Iran and squeezed the ayatollah, Hezbollah and Hamas,” Pompeo said.

The secretary of state likewise touted the Israel-United Arab Emirates relations normalization agreement and evoked religion in praising Trump’s decision to recognize Jerusalem as the capital of Israel.

“The president, too, moved the US Embassy to this very city of God, Jerusalem — the rightful capital of the Jewish homeland,” said Pompeo, the Wailing Wall and the Temple Mount behind him.

On Monday, former US Ambassador to the UN Nikki Haley also slammed the Iran deal and voiced support for the embassy’s move to Jerusalem in a speech to the convention.

In his speech, Pompeo also criticized China’s handling of COVID-19, praised Trump’s negotiations with North Korea and said NATO is stronger in the face of Russia. On Turkey, he mentioned successful US efforts in getting minister Andrew Brunson out of Turkish prison.

There is controversy regarding whether Pompeo should have spoken at the political event. Government guidelines stipulate that presidential appointees must adhere to federal restrictions on political activity while in office, according to State Department documents made public by the House Foreign Affairs Committee. Pompeo himself directed State Department employees to not partake in partisan politics last month. His speech was clearly political and called for Trump’s reelection.

The Middle East came up elsewhere on day two of the convention.

Republican Sen. Rand Paul of Kentucky said, “We must not continue to leave our blood and treasure in Middle quagmires.” He also criticized Democratic presidential nominee Joe Biden’s 2002 Senate vote for the Iraq war.

Republicans also aired a naturalization ceremony during the event where immigrants from Sudan, Lebanon and elsewhere became US citizens.

The convention will wrap up Thursday when Trump formally accepts the party’s nomination to run for a second presidential term.