The president slammed his Democratic rival for voting for the 2003 Iraq war, but there's no record Trump opposed the invasion at the time. 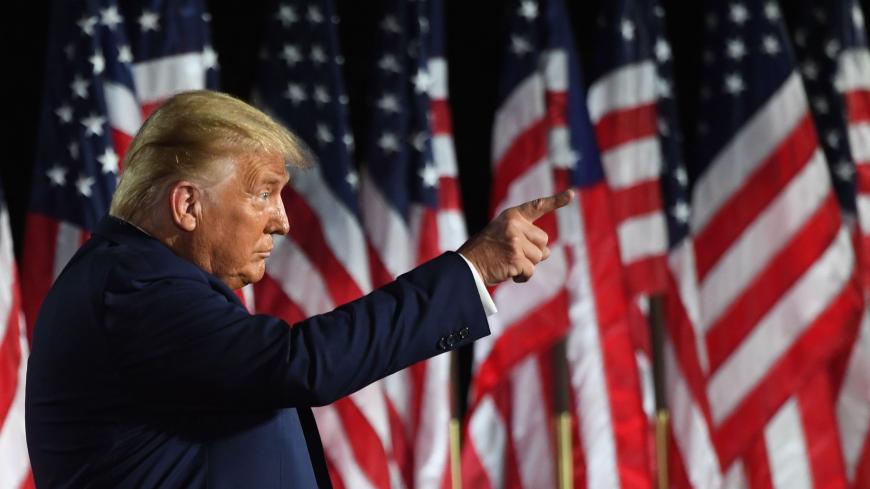 US President Donald Trump gestures at the conclusion of the final day of the Republican National Convention from the South Lawn of the White House on Aug. 27, 2020, in Washington. - SAUL LOEB/AFP via Getty Images

US President Donald Trump, in accepting the Republican Party’s nomination for president Thursday night to conclude the Republican National Convention, heralded the US-brokered agreement for Israel and the United Arab Emirates to normalize ties and went after opponent Joe Biden’s record on Middle East issues.

This month's Emirati-Israeli agreement to normalize relations means the UAE has become the third Arab country to have official relations with Israel, joining Egypt and Jordan.

Trump praised the historic agreement about halfway into his 70-minute speech.

“We achieved the first Middle East deal in 25 years,” he said. “Thank you, UAE. Thank you to Israel.”

The Israel-UAE deal was mentioned throughout the night. Trump’s daughter and adviser Ivanka Trump also praised the agreement in her speech. A campaign commercial aired by the Republican Party between speeches likewise praised the deal.

Trump also celebrated leaving the Iran nuclear deal and moving the US Embassy to Israel from Tel Aviv to Jerusalem in his remarks. US Secretary of State Mike Pompeo and former US Ambassador to the UN Nikki Haley made similar comments during their convention speeches.

Earlier this month, Trump described the Jerusalem move as “for the evangelicals,” referring to religious Christian voters who supported the decision.

Trump, like Pompeo, reiterated that the US airstrike that killed Iran’s Islamic Revolutionary Guard Corps leader Qasem Soleimani in January was the right move. “We eliminated the world’s No. 1 terrorist by far: Qasem Soleimani,” said Trump at the convention.

The president then went after his Democratic rival’s record on the Middle East, saying, “He voted for the Iraq war.”

Biden has been criticized for his 2002 Iraq war vote, including by Democrats. Barack Obama, under whom Biden served as vice president, won the presidency in 2008 in part because of his stark opposition to the war. Trump repeatedly criticized the war when running in 2016, which made him somewhat unique among Republicans, as the war had been pushed for by Republican President George W. Bush. There is no public record of Trump opposing the war before the 2003 invasion, however.

Trump added that Biden “opposed the mission to take out Osama bin Laden,” the al-Qaeda leader who was the mastermind of 9/11. Bin Laden was killed by US special forces in a raid in Abbottabad, Pakistan in 2011. Arkansas Republican Sen. Tom Cotton echoed this claim in his speech Thursday.

A fact check by NBC shows that Biden had told Obama “don’t go” regarding the attack, wanting to be sure that bin Laden actually was at the target site. But Biden later said he had told the president to “follow your instincts,” according to the outlet.

Trump gave the United States credit for the defeat of the Islamic State (IS) in March 2019. “We obliterated 100% of the ISIS caliphate,” he said, using an alternative abbreviation for IS.

The US-led Global Coalition against IS included the Kurdish-led Syrian Democratic Forces, which did much of the major fighting against IS in Syria. While IS has lost control of the land it held in Iraq and Syria, the militant group remains active and has carried out numerous attacks in the region this year.

The parents of Kayla Mueller, an American killed by IS in captivity in Syria in 2015, spoke before Trump did. Mueller was an aid worker abducted by IS in northern Syria at the height of the civil war. She was raped during her 18-month detention and then killed. US attempts to rescue her were unsuccessful.

The Muellers accused the Obama administration and Biden of a lack of interest in their daughter’s case at the convention. “To this day, we’ve never heard from Joe Biden,” said Carl Mueller.

The Muellers and other families of Americans killed by IS are now supporting efforts to try British members of the group who are suspected of killing Americans.

The Republican convention followed the Democratic National Convention, held the week before.