What Nikki Haley’s exit may mean for the Middle East

Whoever succeeds Nikki Haley as Donald Trump’s envoy to the UN is unlikely to have the long leash and big platform that she held, especially in the first year, before John Bolton and Mike Pompeo came in. 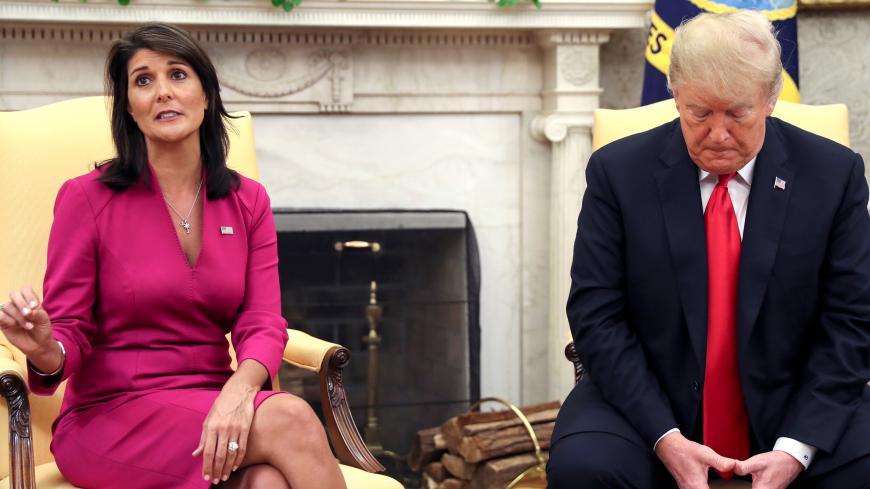 Outgoing US Ambassador to the United Nations Nikki Haley talks with President Donald Trump in the Oval Office of the White House after the president accepted Haley's resignation in Washington, US, Oct. 9, 2018. - REUTERS/Jonathan Ernst

WASHINGTON — As Nikki Haley’s sudden announcement of her decision to resign as US ambassador to the United Nations set Washington buzzing about what her future political plans may be, Israeli leaders were swift in issuing heartfelt statements profusely thanking her for standing up for Israel in the world body, and saying they hope to work with her again.

“I thank Ambassador Haley for her courage and for a term of office that will be remembered as a turning point in the relations between the US and international organizations,” Israeli President Reuven Rivlin tweeted, adding that he would be happy to welcome her at the presidential residence on her next visit to Israel.

But for the flood of farewell wishes from Israeli leaders, the Palestinians and Jordanians were silent about Haley’s plans to depart. An Iranian diplomat said, in effect, good riddance.

“'New Sheriff in town' is no longer,” Alireza Miryousefi, the spokesman for the Iranian mission to the UN, wrote. “We do not know who she was or what she was about, but she was a serious problem at the UN with her uninformed statements & her causing the isolation of U.S. You need to know: there is no new sheriff in town.”

Though Haley’s resignation letter to President Donald Trump, obtained by the Washington Post, was dated Oct. 3 — almost a full week ago — Trump, appearing with Haley at the White House today, said it might be two or three weeks before he would name a nominee to succeed her. He would be consulting with Haley and “the general” — presumably White House Chief of Staff John Kelly — on possible candidates for the UN job, Trump said.

Haley, speaking with Trump at the White House, insisted she has no plans to run for any political office in 2020 and that she would be campaigning for Trump. She said that after two years battling Iran, North Korea and anti-Israel bias as Trump’s UN envoy, and six years before that serving as South Carolina governor, she thought it was time to let someone else do the job.

“I don’t have anything set on where I’m going to go,” she said. “I think that the main thing was … it’s been eight years of intense time, and I’m a believer in term limits.”

“I think you have to be selfless enough to know when you step aside and allow someone else to do the job,” Haley said.

“I'm so proud of you,” Trump responded.

Haley notably praised Ivanka Trump and Jared Kushner, Trump’s daughter and son-in-law, fueling speculation that one or both of them might be in the mix of possible successors. (Trump, speaking later this afternoon, said Ivanka would be “wonderful" as his UN envoy, but he does not want to be accused of nepotism. He also said former White House aide Dina Powell, now at Goldman Sachs, is someone he would consider.)

“I can't say enough good things about Jared and Ivanka,” Haley said. “Jared is such a hidden genius that no one understands. I mean, to re-do the NAFTA deal the way he did. What I've done working with him on the Middle East peace plan — it is so unbelievably well done.”

“And Ivanka has been just a great friend,” she said. “And they do a lot of things behind the scenes that I wish more people knew about.”

Israel would like to see Trump appoint another fiercely pro-Israel, anti-Iran hawk like Haley. Shalom Lipner, a former official in the office of the Israeli prime minister, suggested that Rudy Giuliani, Trump’s personal attorney and former mayor of New York City, would delight Israel. “Israelis would be tickled pink,” Lipner said.

Former State Department official Ben Chang said he expected a top candidate to be Richard Grenell, Trump’s ambassador to Germany and a former spokesman for Bolton at the UN.

“With Bolton in the West Wing, smart $ has to have Ric Grenell in the running to fill the UN Perm Rep job, not at least because Grenell served for 8 years as @USUN spox, including under Bolton,” Chang said on Twitter.

But Trump said tonight that he’d prefer to keep Grenell in Germany.

"Ric is doing so well, I wouldn't want to move him,” he told reporters en route to Iowa.

Former State Department Middle East peace process veteran Aaron David Miller told Al-Monitor that whoever succeeds Haley is unlikely to have the long leash and big platform that she held, especially in the first year, before Bolton and Pompeo came in.

“The reality is, she [Haley] functioned in a unique period where you had what I call the Tillerson vacuum on the one hand … and had two national security advisers who frankly didn’t have the clout to impose discipline on what she chose to speak about,” Miller, now with the Wilson Center, told Al-Monitor, referring to former Secretary of State Rex Tillerson and Trump’s first two national security advisers, Michael Flynn and H.R. McMaster.

“But on the Middle East, depending on what the issue is, the fact is, it is all in the hands of someone else now,” Miller continued. “The Arab-Israeli issue, Jared [Kushner] is working; China, North Korea, is being run out of the White House. Then you finally got Iran, which, again, is an issue on autopilot.”

“I think what you are going to see is the role of the US ambassador to the UN reduced to where it has always been … but by and large, playing within the structure and constraints of the system,” Miller said.