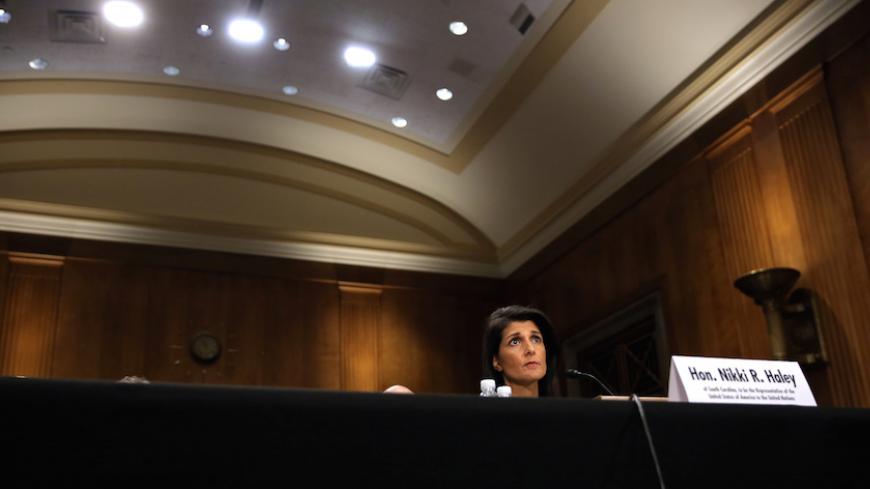 South Carolina Gov. Nikki Haley testifies before a Senate Foreign Relations Committee confirmation hearing in Washington on her nomination to be to US ambassador to the United Nations, Jan. 18, 2017. - REUTERS/Carlos Barria

Diplomatic novice Nikki Haley easily won over her Senate interrogators Jan. 18 by reassuring them that the incoming administration will at least have a steady hand guiding the US Mission to the United Nations.

On every issue from the Iran deal to Israeli-Palestinian peace to the global world order, the South Carolina governor offered a nuanced and measured counterpoint to President-elect Donald Trump's inflammatory rhetoric. During 3½ hours before the Senate Foreign Relations Committee, Haley tactfully won over conservative Republicans and liberal Democrats with pointed answers to a wide variety of questions that repeatedly put her at odds with her future boss.

Rather than rip up the nuclear deal with Iran, "I think what would be more beneficial at this point is that we look at all the details," she said. "And if it is not being followed, and if we do find violations, then I think we should act and I think that we should act strongly."

Likewise on the issue of Israeli-Palestinian peace, Haley said the Trump administration remains committed to a two-state solution.

Haley offered similar support for US alliances such as NATO, which Trump has continued to disparage as "obsolete." She called the United States an "indispensable voice of freedom" around the world.

She endorsed the strategic withholding of US contributions to the UN to achieve specific reforms, asserting that "we don't believe in slash and burn." US funding accounts for 22% of the UN's general budget and 29% of its peace-keeping budget.

"I do think it can be leveraged, and I do think it's something we should be open about," she said. "I won't shy away, and I need your help to do it, because I need to be able to say that I had Congress backing me up if this doesn't change, the funding will stop."

And unlike secretary of state nominee Rex Tillerson last week, she did not hesitate to agree with senators who call Russia's bombing of civilians in Aleppo a "war crime."

"She certainly has an independent view and that's what senators wanted to see in her and I think that's why you saw her being so well received," panel chairman Sen. Bob Corker, R-Tenn., told reporters after the hearing. "She's obviously her own person. At the end of the day she'll be carrying out the policies of the president-elect, sure, but she has a very different view about our alliances, she has a very different view on a number of issues."

Corker said the committee could clear her as early as Jan. 23 and set up a floor vote the following day, along with Tillerson, if they answer the panel's written questions by then.

Longtime Trump critics made no effort to hide that the daughter of Indian Sikh immigrants offered a welcome counterpoint to Trump's discourse throughout the campaign. A rising Republican star, Haley gained national prominence in 2015 after a white supremacist killed nine people at a black church in Charleston.

"America’s voice in the United Nations needs to be strong. It needs to be somebody that can bring people together. It needs to be a voice that understands what America is all about," Sen. Lindsey Graham, R-S.C., said in introducing her to the committee. "I think Nikki Haley, our governor in South Carolina, is the right person at the right time. She represents a combination of intellect, determination, grace and an understanding of America that the world needs to hear.”

During the hearing, Haley flatly opposed any effort to create a registry of Muslims, as floated by Trump during the campaign. But she defended her opposition to resettling Syrian refugees last year, saying that FBI Director James Comey could not assure her that they could be properly vetted.

"That's when I said, we can't take refugees from Syria until I know that I can protect the people of South Carolina," Haley said.

Haley kicked off the hearing with a sharp criticism of the Barack Obama administration's decision not to veto last month's UN Security Council resolution that faulted Israeli settlement construction for undermining peace. Lawmakers of both parties have since taken aim at the decision, with Sens. Marco Rubio, R-Fla., and Tom Cotton, R-Ark., introducing legislation this week that would withhold US funding for any UN agency that "promotes or condones anti-Semitism."

While praising the UN for its role in humanitarian aid, arms control and peacekeeping, Haley slammed its "checkered history" on a wide range of issues.

"Nowhere has the UN's failure been more consistent and more outrageous than in its bias against our close ally, Israel," Haley said, pointing out that the General Assembly session that just ended adopted 20 resolutions against Israel versus six targeting the rest of the world combined.

She called last month's vote on Resolution 2334 a "terrible mistake, making a peace agreement between the Israelis and the Palestinians even harder to achieve."

And she reminded lawmakers that she was the first governor to sign legislation against the boycott, divestment and sanctions effort.

"I will not go to New York and abstain when the UN seeks to create an international environment that encourages boycotts of Israel," she said in a dig at her predecessor, Samantha Power. "In fact, I pledge to you this: I will never abstain when the United Nations takes any action that comes in direct conflict with the interests and values of the United States."

And she said she was "absolutely" ready to move the US Embassy in Israel from Tel Aviv to Jerusalem, as Trump vowed to do during the campaign.

"Not only is that what Israel wants, but it's also what Congress itself has said that it supports," she said.

Pressed on the long bipartisan opposition to Israeli settlement construction, however, Haley acknowledged a difference of opinion with Israel but suggested the issue should be litigated bilaterally rather than in front of the international community.

"What I think happened with [Resolution] 2334 was a kick in the gut to everyone," Haley said. "We can think what we want to think on settlements, but you have to go back to the fact that the US abstention … was wrong. And I think the fact that we have not allowed the Palestinian Authority and Israel to resolve this themselves, and I think for the UN to have inserted themselves into that, I believe is wrong."