Iraq war cheerleader Elliott Abrams is in the running for the No. 2 spot at the State Department. Will Democrats put their misgivings behind them in order to rein in Trump? 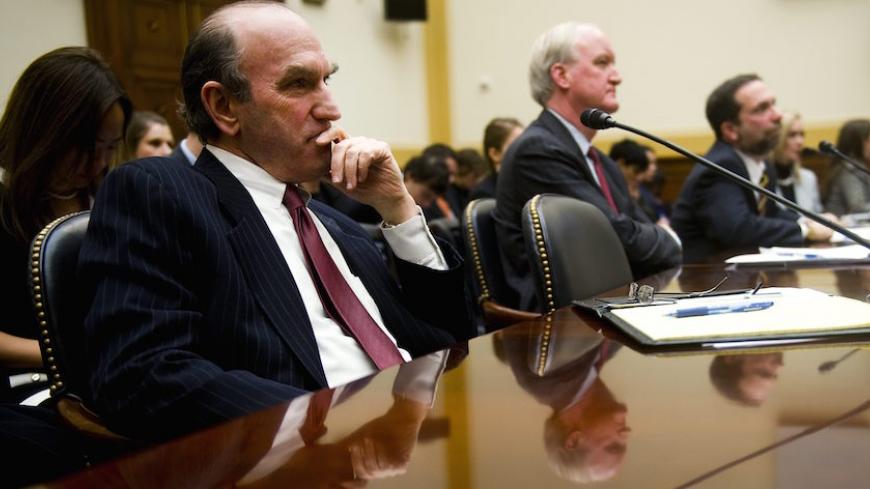 Senior Fellow for Middle Eastern studies at the Council on Foreign Relations Elliott Abrams (L), president of the International Republican Institute Lorne Craner (C) and executive director of the Washington Institute for Near East Policy Robert Satloff testify before the House Foreign Affairs Committee on Capitol Hill on the recent developments in Egypt and Lebanon, Washington, DC, Feb. 9, 2011. - AFP/GETTY/Jim Watson

If any other Republican president were running the country, Elliott Abrams' hawkish pro-democracy views would be a liability with Democrats. With Donald Trump in charge, they're a badge of honor.

The president was due to meet Feb. 7 with Abrams at the White House, fueling speculation that the longtime diplomat will shortly be getting the nod to be deputy secretary of state. Senior department officials are gunning for an experienced lieutenant to help Secretary of State Rex Tillerson steer America's massive diplomatic corps, but Trump advisers such as Steve Bannon are said to be wary of a man who criticized the president throughout the campaign.

Ever since Abrams' name began to be floated as a contender for a top spot, familiar complaints have emerged on both the left and right: his unwavering support for repressive right-wing governments in Central America when he was assistant secretary of state under President Ronald Reagan; his conviction — and subsequent pardon by President George H.W. Bush — for withholding evidence from Congress in the Iran-Contra affair; and his enthusiastic embrace of the war in Iraq as senior director of Middle East affairs in President George W. Bush's National Security Council. But Democrats who would play a key role in confirming him in the Senate Foreign Relations Committee are paying especially close attention to Abrams' more recent comments critical of Trump and of undemocratic US allies in the Middle East.

"If [Abrams'] record proves out those things to be a part of his experience," Coons added, "then I may be inclined to support him."

Since leaving government, Abrams has been a vocal critic of the lack of freedom of expression in the Middle East. He slammed the Barack Obama administration for its "simply ridiculous" massive delegation to Saudi King Abdullah bin Abdul-Aziz Al Saud's funeral in January 2015 and repeatedly warned of the "false" trade-off between stability and democracy as a leader of a panel of experts that sought to warn Obama about what it saw as Egypt's authoritarian drift under President Abdel Fattah al-Sisi.

Sen. Tim Kaine, D-Va., the top Democrat on the committee's Middle East panel, said senators of both parties have an "existential worry" about some of Trump's advisers, including Bannon, National Security adviser Michael Flynn and senior White House adviser Stephen Miller. He said Abrams appears to have "sound judgment" as opposed to "conspiracy theorists prone to make quick and rash decisions."

"We want mature people there who understand the dangers of authoritarianism," Kaine said.

"I want to know from him what lessons he's learned from our misadventures in Iraq," he said. "I'm not real interested in having somebody there who is an enthusiastic supporter of mistakes we've made in the past."

But he applauded Abrams for speaking up during the presidential race, during which Abrams notably criticized Trump's propensity to "insult" US allies in the Middle East, Europe and Asia.

"He was very loud during the campaign, pushing back against some of the more reckless ideas coming out of the Trump campaign," Murphy said. "That certainly makes him a little bit more palatable in my eyes."

Both Murphy and Kaine said Democrats may end up supporting Abrams for the same reasons they supported Trump's choice for ambassador to the UN. Nikki Haley was confirmed last month by a vote of 96-4.

"I voted for Nikki Haley in part because it was important to have some members of the Cabinet who were willing to speak truth to power," Murphy said.

Abrams will need that Democratic support if his nomination has any hope of clearing the Senate Foreign Relations Committee, where Republicans outnumber Democrats 11 to 10. Sen. Rand Paul, R-Ky., the Republican Party's lead critic of military interventionism, has already vowed to oppose him.

"Crack the door to admit Elliott Abrams and the neocons will scurry in by the hundreds," Paul wrote in an op-ed Feb. 7 in Rare, a libertarian-leaning website based in Washington. "While President Trump has repeatedly stated his belief that the Iraq War was a mistake, the neocons (all of them Never-Trumpers) continue to maintain that the Iraq and Libyan wars were brilliant ideas. These are the same people who think we must blow up half the Middle East, then rebuild it and police it for decades."