The secretary of state says IS affiliates would be considered as terrorist associates covered by a use of force authorization. 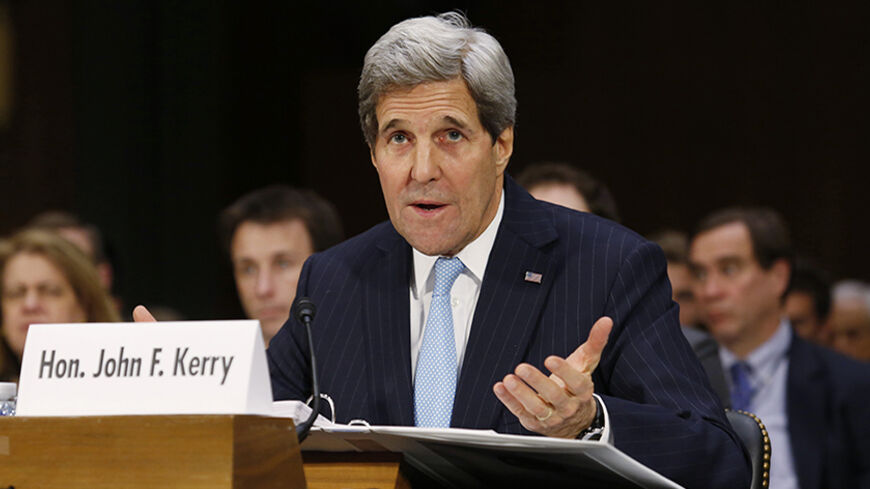 Secretary of State John Kerry asked Congress for a green light to go after Islamic State affiliates anywhere in the world as debate on a new authorization for use of force got underway Tuesday.

Kerry asked the Senate Foreign Relations Committee to give President Barack Obama the "clear mandate and flexibility he needs" to defeat the Islamic State (IS). He said the authorization should be "limited to that group and forces associated with it," later clarifying that groups that have pledged allegiance to IS would fall under that heading.

The statement raised concerns with lawmakers on both sides of the aisle.

"We'll have a full debate on that in the markup," panel Chairman Robert Menendez, D-N.J., told Al-Monitor. "It's complex."

Menendez has introduced a draft authorization that does not set geographic limits for the fight against IS but defines the enemy as IS and "individuals and organizations fighting for or on behalf of the Islamic State of Iraq and the Levant or a closely-related successor entity." The bill is scheduled to be marked up by the full committee on Thursday but is not likely to get to the Senate floor before Congress recesses for the year.

The top Republican on the panel, Sen. Bob Corker, R-Tenn., also has questions.

"Before I say 'OK, not OK,' I want to more fully understand what he means by that," said Corker, who is in line to become chairman when Republicans take over the Senate in January. "I think there were a number of comments that [Kerry] made that will need to be teased out and more fully understood."

The discussion got underway after Sen. Tom Udall, D-N.M., asked Kerry directly about groups that have pledged allegiance. He singled out Libya, Yemen and Algeria; groups in Saudi Arabia and Egypt have also pledged allegiance to IS.

Kerry pushed back hard against Paul's general line of questioning.

"That statement is being made without any input or frankly consideration for the limits and strictures within which the United States of America is currently operating," Kerry said. "We have some of the most extraordinary self-imposed constraints on our check-lists for when and where and how we might use force — even where we've been authorized to use force."

He gave the example of non-US hostages being held outside of Iraq or Syria as a potential justification for the broad request.

"There are ways to craft this so that it's not open-ended," Kerry said.

"A designation of war has to be about more than a simple stated affiliation from a foreign group," Murphy told Al-Monitor. "We need to have an independent reason for believing they're a threat to the United States." He said that to be considered an associate a group should display "coordination of activities and hierarchy and decision-making" with IS.

Other senators appeared to have fewer qualms.

"The problem is we're not fighting a country and there aren't geographic boundaries," Sen. Jim Risch, R-Idaho, the top Republican on the Near East panel, told Al-Monitor. "So I think it would be very difficult to constrain the commander-in-chief on geographic boundaries — I don't think that's a good idea."

"The draft that's before us doesn't limit geography," she said. "If they're planning terrorist operations out of Libya versus Syria or Iraq, then I think we should be concerned about that."