President Donald Trump’s long-delayed pick to serve as the top US diplomatic official for the Middle East is set to clear the Senate Foreign Relations panel. 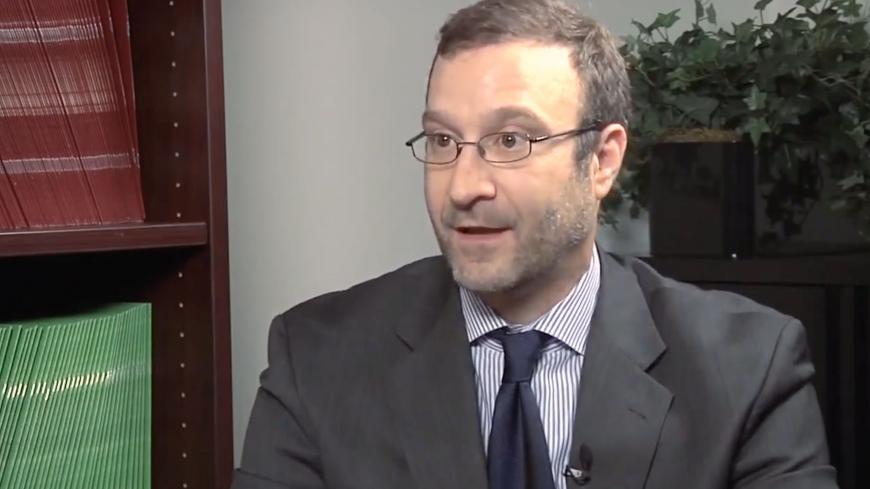 David Schenker, nominated as assistant secretary of state for Near Eastern affairs, seen in a still from a video uploaded May 16, 2012. - YouTube/americaabroad

David Schenker, nominated as assistant secretary of state for Near Eastern affairs more than a year ago, is expected to be voted out of the Senate Foreign Relations Committee at its next meeting following the two-week congressional recess. Sen. Tim Kaine, a Virginia Democrat serving on the panel, had been holding Schenker up since September in an unsuccessful bid to force the Trump administration to release a secret legal memo justifying US cruise missile strikes against Syria over its use of chemical weapons.

Schenker served as the Pentagon’s top policy aide for the Levant during the George W. Bush administration. In his role at the Washington Institute for Near East Policy, Schenker cultivated ties in Lebanon that cross religious and sectarian lines and bonds in Jordan that span “from the mayors of small towns in Jordan to the king,” said Dennis Ross, a former special assistant to President Barack Obama who worked with Schenker at the Middle East-focused think tank. "So you’re getting somebody who knows the broader issues in the region. He brings a very special feel to the job," he added.

If confirmed by the Senate, Schenker would become the bureau’s first permanent leader since Trump first took office in January 2017, taking over from career diplomat David Satterfield. Satterfield, who has filled the role on an acting basis, has been tapped to be ambassador to Turkey.

In his interim role, Satterfield pushed for the United States to scale back a ceasefire zone near Syria's borders with Jordan and Israel, even as national security adviser John Bolton sought to deny Iran’s presence in the country. Though Special Representative for Iran Brian Hook leads the “maximum pressure” campaign against Tehran inside the State Department, Schenker is likely to face questions about the Trump administration's endgame from allies around the region.

“Even if he doesn’t have responsibility for Iran it’s going to come up,” said Ross. “When he’s in the Gulf it’s going to dominate the discussion.” His likely advancement in the Senate would come a few weeks after the State Department designated Iran’s elite Islamic Revolutionary Guard Corps as a terrorist organization.

But that pressure may be hard to extend in some places, such as Lebanon, where the United States has struggled to get the Beirut government to disentangle its relationship with Iran-backed Hezbollah. "You can apply pressure, but you’re applying pressure on jello," said another former US official in the region on condition of anonymity. "It squishes around."

Kaine never had any formal authority to hold up Schenker in committee — only the panel’s leader can do that — but Chairman Jim Risch, R-Idaho, and his predecessor Bob Corker, R-Tenn., had previously complied with his wishes over the course of a couple of business meetings. Kaine, who has pressed both the Barack Obama and Trump administrations for a more robust legal justification for US wars in the Middle East, maintains his hold, however, denying consent for a quick vote on the Senate floor.

“Sen. Kaine hasn’t lifted his hold on David Schenker’s nomination and the administration still has not provided him with its 2017 memo on the legal rationale for airstrikes against Syria,” said Kaine spokeswoman Sarah Peck. The Senate Foreign Relations Committee’s top Democrat Sen. Robert Menendez has no outstanding inquiries regarding Schenker’s nomination, a committee aide told Al-Monitor on condition of anonymity.

In a statement late last month, Risch called for the Senate to clear a backlog of 61 Trump administration picks to fill the State Department rank. Meanwhile, Senate Democrats have repeatedly sent back nominees they have deemed to be unqualified.  According to a White House aide involved in the confirmation process speaking on background, “the president is committed to Schenker’s nomination, and the Senate leadership knows this.” The aide added that the president believes the Senate confirmation process has moved too slowly.

The backlog of State Department nominees has begun to clear. Twenty-three nominees were voted out of committee and onto the Senate floor last week, including John Abizaid, the former US Central Command chief poised to become US envoy to Saudi Arabia, and Matthew Tueller, Trump’s pick to become ambassador to Iraq. On Thursday, the White House tapped Jonathan Cohen, who replaced Nikki Haley as acting US ambassador to the United Nations, to serve as envoy to Egypt.

Trump, however, has yet to nominate envoys to serve in Jordan and Qatar. The US Government Accountability Office reported last month that 18% of foreign service posts in the Middle East remained unfilled as of early 2018.

Schenker may play a smaller role in Iraq and Syria, as his former Washington Institute colleague and one-time US ambassador to Baghdad James Jeffrey is serving as a dual-hatted envoy for the Syria peace process and the fight against the Islamic State. Former US officials worry that chronic vacancies will put more pressure on Schenker to jet around the region to make policy.

"When you’ve got a fully staffed set of embassies across the region, you’ve got ambassadors who can be talking and working at senior-most levels of government. When it’s working well, it’s a smoothly humming orchestra,” said the former US official. “Where you don’t have all of that senior leadership and you find that some charges can’t get access, then you have more of a burden falling back on Washington to help manage those relationships."