Jordanian officials said Monday the small country had entered its second wave of the coronavirus. 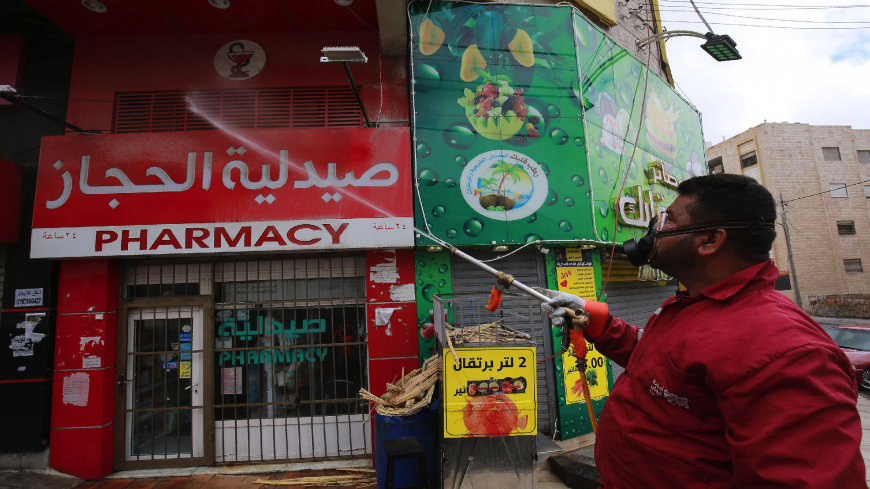 A municipality worker disinfects a pharmacy in the Jordanian capital Amman as part of preventive measures against the spread of the coronavirus, on March 21, 2020.

Jordan will extend an overnight curfew beginning Tuesday amid a surge in new COVID-19 cases, in what Minister of State for Media Affairs Amjad Adaileh said is now the second wave of the virus.

Authorities are extending an overnight curfew for Jordanians from 11 p.m. to 6 a.m., with businesses not permitted to operate between the hours of 10 p.m. and 6 a.m. On Friday, a 24-hour curfew will be in place in Jordan’s two biggest cities, Amman and Zarqa.

On Sunday, Prime Minister Omar Razzaz said the government “will not spare any effort” to protect Jordanians from the virus and officials are planning area-specific restrictions.

The Middle Eastern country of nearly 10 million people is struggling with a spike in infections. The number of confirmed cases is now averaging 20 to 35 each day, up from fewer than 10.

On Monday, health authorities announced 30 new cases and two more deaths, bringing the total to 1,639 cases and 14 deaths. Of the two deaths, Jordanian Health Minister Saad Jaber said one was a 99-year-old woman and the other is an Arab national who entered Jordan on a private jet to receive medical treatment for a critical condition.

Jordan imposed one of the world’s harshest lockdowns in March with an around-the-clock curfew that included bans on taking walks outside and going to grocery stores. By April, officials had eased the lockdown and taken steps to reopen the economy.

Jordanian authorities blame the spike on truck drivers and others entering Jordan from the Jaber border crossing with Syria. To stave off future infections, Jordan closed the entry point earlier this month. Last week, Jordan imposed a lockdown on the border district of Ramtha, and authorities are reevaluating procedures at the Omari border crossing between Jordan and Saudi Arabia.