Jordan reported 62 deaths from the virus on Wednesday, raising the death toll to 1,029. 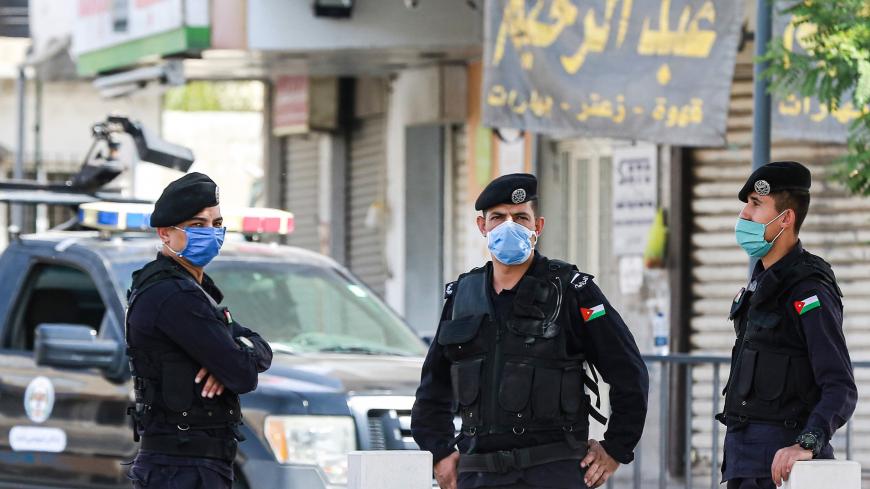 Mask-clad Jordanian policemen man a checkpoint as they enforce a COVID-19 coronavirus lockdown in the capital, Amman, on Oct. 9, 2020. - KHALIL MAZRAAWI/AFP via Getty Images)

Jordan registered 62 deaths from COVID-19 on Wednesday in what marks the country’s highest yet daily death toll from the virus.

The Health Ministry announced 4,658 new confirmed coronavirus cases, bringing the total to 91,234 and 1,029 deaths. The Jordanian government is grappling with a surge in new cases, having hit a record caseload of 5,877 Sunday.

The kingdom of 10 million people initially had among the lowest per capita infection rates in the region thanks to a monthlong, round-the-clock curfew imposed in March. The harsh, military-enforced restrictions brought the virus under control, but crippled the Jordanian economy, which shrank by 3.6% in the second quarter of 2020.

Faced with an uptick in cases since easing restrictions, Prime Minister Bisher Khasawneh announced that Jordan will reinstate a four-day nationwide lockdown beginning Nov. 11, a day after the country is due to hold parliamentary elections. Khasawneh also said increased police patrols will fine individuals who violate mask orders in public areas.

The government has also extended curfew hours from 10 p.m. to 6 a.m. Stores must close by 9 p.m., and fitness centers and indoor pools are shuttered until further notice.

The Amman Chamber of Commerce took issue with the new restrictions. In an interview with The Jordan Times, the association’s president said closures aren't the solution and called on the Jordanian government to provide financial support for struggling businesses.

“Even if there was an exceptional need for a closure, the government must have a plan to compensate the affected sectors,” Khalil Hajj Tawfiq said.