The country of some 10 million people nearly doubled its total of coronavirus cases in the space of a week. 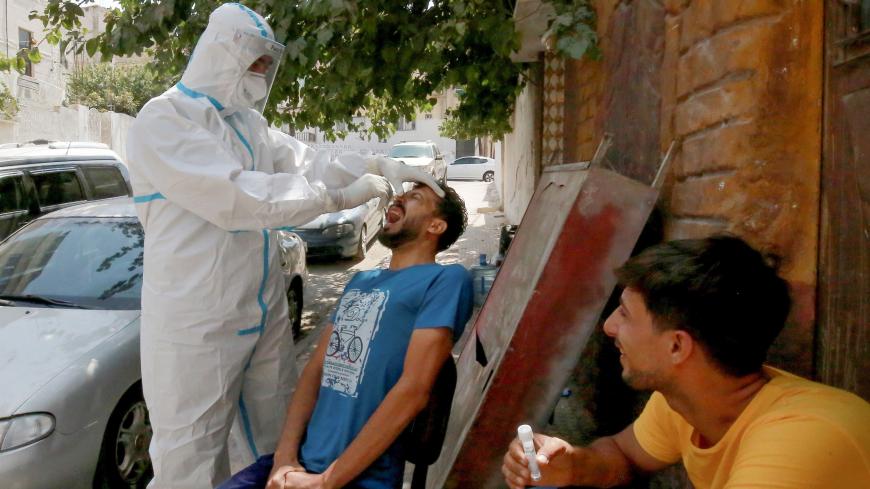 A man reacts as a swab sample is taken from his nose for COVID-19 coronavirus disease in a suburb of the Jordanian capital, Amman, after a hike in the number of infections, on Sept. 4, 2020. - KHALIL MAZRAAWI/AFP via Getty Images

Jordan is starting two-day lockdowns this weekend amid a surge in new coronavirus cases that are pushing overburdened hospitals to the limit.

In the past week, the country of nearly 10 million people has registered around 10,000 cases, Reuters reported. This is nearly double the number of cases the country had previously recorded since the pandemic began.

Today, the Health Ministry announced 13 more COVID-19 fatalities, bringing the country's death toll to 144. With the addition of 1,317 infections, the country’s total number of cases stands at 21,517.

Mazen Faraiah, the director of operations for the National Center for Security and Crisis Management’s crisis cell, said the only categories of people allowed to leave their homes during the curfew hours are epidemiological investigators, health care workers and a small group of essential employees.

The Jordanian army has been deployed to enforce the curfew, which begins at 12:01 a.m. Friday and runs through Saturday. The existing weekday curfew from 1 a.m. to 6 a.m. will continue, officials said, and state-run news agency Petra reported the new curfew will be reintroduced each weekend “until further notice.”

Last month, the government introduced a number of new restrictions, including the shuttering of places of worship, cafes, restaurants and public markets. Schools have switched to online learning. Jordan’s international airport in Amman resumed regularly scheduled international flights in September after a six-month closure.

Jordanian officials have sought to avoid the harsher restrictions imposed on the country in March, which had a military-enforced, round-the-clock curfew. Those actions curbed the virus but dealt a massive blow to Jordan’s economy.