The US-mediated normalization agreement with the United Arab Emirates and the visit of Secretary of State Mike Pompeo help Prime Minister Benjamin Netanyahu to shift public attention away from the multiple crises he faces. 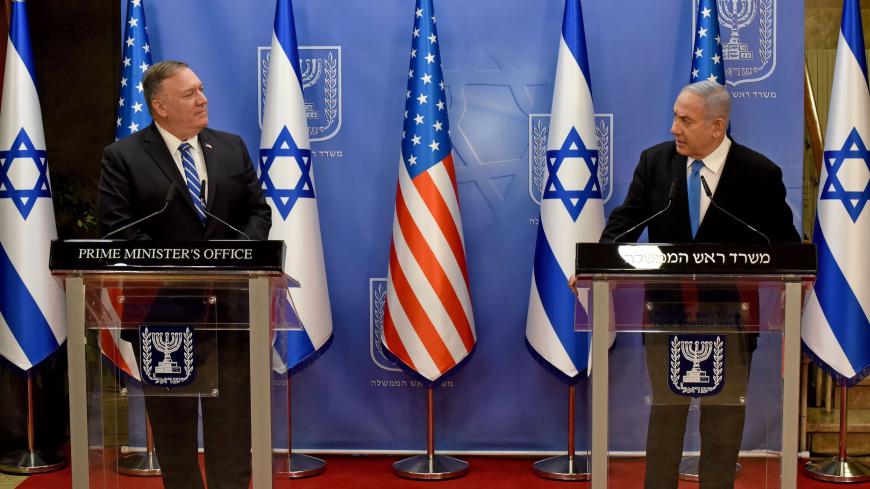 US Secretary of State Mike Pompeo (L) and Israeli Prime Minister Benjamin Netanyahu make a joint statement to the press after meeting in Jerusalem on Aug. 24, 2020. - DEBBIE HILL/AFP via Getty Images

While Prime Minister Benjamin Netanyahu hosted US Secretary of State Mike Pompeo in his office on Aug. 24, he was also in an exhausting battle with Defense Minister Benny Gantz. The fight could have ended with a decision to dissolve the Knesset, sending the country off to a fourth round of elections. Late in the evening, Netanyahu and Gantz accepted a compromise for delaying the duel on the budget by 120 days.

Netanyahu likely found some solace yesterday in his meeting with his old friend Pompeo. Not only is Pompeo the personal representative of US President Donald Trump, he is also an important Netanyahu ally in his own right. Pompeo arrived in Israel as part of a series of visits to the region to advance the peace treaty with the United Arab Emirates. At the same time, he was dropping by to lend Netanyahu a hand during one of the toughest moments of his career.

After a long meeting in Netanyahu’s office, the two were all smiles as they came downstairs to face the cameras and deliver a number of joint statements. Their body language was warm and intimate despite the masks both men wore.

Pompeo clarified to the press that Israel’s security interests would not suffer amid recent reports that as a result of the new agreement, the United States plans to sell F-35 fighter jets to the Emiratis. The prime minister has already spent several days defending the normalization agreement and explaining that he did not sell out Israel’s security for an American arms deal, despite what his rivals claim.

It is safe to assume that the F-35 sale came up in the meeting. Pompeo jumped to Netanyahu's aid, declaring, “The United States has a legal requirement with respect to qualitative military edge. We will continue to honor that. But we have a 20-plus-year security relationship with the United Arab Emirates as well. … We will now continue to review that process to continue to make sure that we’re delivering them with the equipment that they need to secure and defend their own people from this same threat, from the Islamic Republic of Iran as well. … We’ll do it in a way that preserves our commitment to Israel as well.”

Netanyahu said that not only did the deal with the UAE not include any Israeli agreement to an arms deal, but he did not know about any such deal. Israel's position has not changed, he stressed. “I also learned from Secretary Pompeo — heard again a very, very strong commitment that under all circumstances, the United States will ensure Israel’s qualitative edge. That has been proven to be true over four decades of peace with Egypt, two and a half decades of peace with Jordan. The United States stood by that commitment, and I know — have no doubt that it will continue to do so.”

Netanyahu returned to his office to continue waging his political battle at home over the state budget. At the time, it was not at all clear what Netanyahu really wanted. Was he hoping to schedule yet another election in three months? Could he defeat Gantz and the Blue and White leadership and find himself a way out of the rotation agreement?

At the very last minute, the Knesset approved a compromise: The vote on the budget would be postponed until December.

Nevertheless, no one involved in politics expects the current government to last much longer. The prevailing assessment is that while its life span may have been extended a few more months, the end of this government is on the horizon. The crisis of trust between the parties and between their respective leaders is so severe that that the chances of anything changing soon are meager at best. Based on comments made yesterday by senior leaders of both parties, there will be no reconciliation.

Netanyahu is preparing for a decisive battle for his public stature on the economy and the coronavirus. So far, he is seen as failing on both fronts.

The United States, Trump and the UAE agreement all play important roles in the prime minister’s campaign. Netanyahu will try to present himself as a great statesman compared to other candidates like Gantz, Yesh Atid chair Yair Lapid and Yamina chair Naftali Bennett. They all look weak and inexperienced compared to him.

Sources close to Netanyahu tell Al-Monitor that he and Pompeo talked about a regional peace conference initiated and produced by the United States that would take place in one of the Gulf States. Its purpose would be to push for future normalization agreements between Israel and various other Arab states, including Sudan, Oman, Bahrain and Morocco. Such an event would be a major political boon for Netanyahu, but Trump stands to benefit, too.

Trump and Netanyahu both suffered immensely because of the pandemic and the ensuing economic crises. Trump’s decisive moment will come in early November, when he faces off against Joe Biden in the US presidential election. For Netanyahu, the big battle will be pushed off for a few more months. Trump’s election for a second term would lend support to Netanyahu and to future agreements in the region. But even before the US election, the signing of the agreement between Netanyahu and Crown Prince Mohammed bin Zayed will likely take place in the White House under Trump’s patronage.

Israel HaYom, a newspaper closely identified with Netanyahu, reported on Aug. 22 that Israel hopes to begin direct talks with the UAE as early as this week. Initial discussions to coordinate these talks have already taken place, and more important talks are now being held through intermediaries in Washington. The report also claimed that efforts are underway to arrange a meeting between Netanyahu and Bin Zayed before the agreement is signed.

Netanyahu is hoping for a diplomatic agenda that will overshadow his troubles at home, which include high unemployment, political crises, demonstrations against him and his bribery trial, which is scheduled to start in earnest in January. It is possible that the trial will coincide with an election campaign, which would leave Netanyahu fighting for public support by juxtaposing his historic diplomatic achievements with his legal persecution.

How committed are Trump and Netanyahu to one another? One indication can be found in Pompeo's decision to deliver his speech to the Republican National Convention from Jerusalem. Doing so not only signals unwavering support for Israel to the party’s evangelical supporters, he is also strengthening the current administration’s commitment to Israel and its interests.

From Israel, Pompeo will continue to Sudan, Oman and the United Arab Emirates, where he is expected to hear more good news about the relationship with Israel growing warmer and the alliance against Iran is getting stronger. And as far as Netanyahu is concerned, Pompeo’s visit to the region helps him keep the new peace agreement on the agenda.