US Secretary of State Mike Pompeo's meetings with Israeli Prime Minister Benjamin Netanyahu and other top officials have kicked off an Israeli diplomatic blitz over the country's normalization deal with the United Arab Emirates. 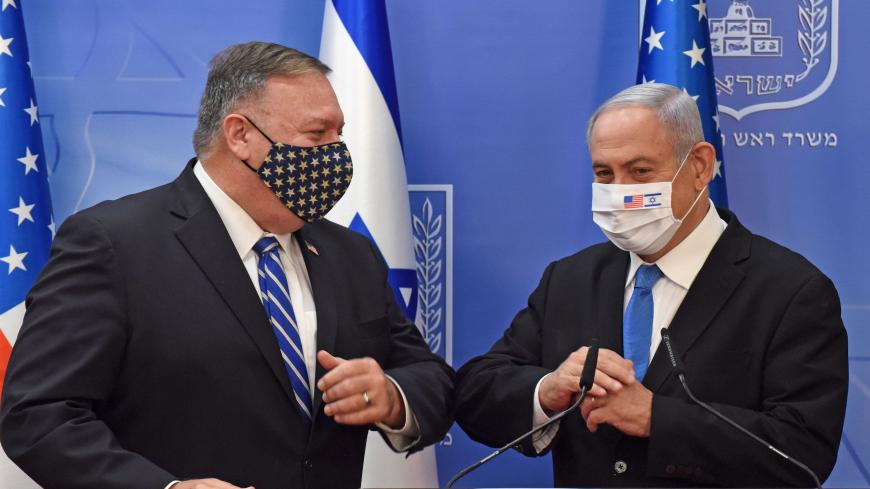 US Secretary of State Mike Pompeo (L) and Israeli Prime Minister Benjamin Netanyahu bump elbows ahead of making a joint statement to the press after meeting in Jerusalem, on Aug. 24, 2020. - DEBBIE HILL/AFP via Getty Images

US Secretary of State Mike Pompeo kicked off his regional tour by meeting Israeli Prime Minister Benjamin Netanyahu as well as Defense Minister Benny Gantz and Foreign Minister Gabi Ashkenazi today in Israel. Pompeo and Netanyahu discussed the Washington-brokered deal reached with the United Arab Emirates and the prospects of normalizing ties with other Arab and Muslim countries.

After his Israel stop, the secretary of state is set to visit Bahrain and Sudan, where he is expected to raise the renewal of ties with Israel. Senior officials in Sudan have made contradictory statements over contacts with Jerusalem on renewing diplomatic ties.  Jerusalem was hoping for Bahrain to follow in the footsteps of the UAE, but some observers believe that after Saudi Arabia's rather chilly reaction to the deal, Bahrain might take its time.

In remarks after the meeting, Netanyahu and Pompeo hailed the UAE-Israel deal, with Netanyahu calling it “the alliance of the moderates against the radicals” and “a boon to peace and regional stability.” Netanyahu also said he hoped other countries will follow UAE and normalize ties with Israel. Pompeo stated, “I am hopeful that we will see other Arab nations join in this. The opportunity for them to work alongside, to recognize the State of Israel and to work alongside them, will not only increase Middle East stability but it will improve the lives for the people of their own countries as well.”

Netanyahus addressed the controversy over the United States selling F-35 fighter jets to the UAE, saying the normalization deal with the UAE “did not include Israel's acceptance [of] any arms deal. I don't know of any arms deal that has been agreed upon but our position hasn't changed.” Netanyahu said he reiterated his objections to Pompeo, who said he is strongly committed to maintaining Israel’s security and its military edge over countries in the region.

After Pompeo's meeting with Gantz and Ashkenazi, Israel’s foreign minister tweeted, "In the meeting, we congratulated [Pompeo] and US President Donald Trump over the upcoming normalization agreement between Israel and the UAE. We also emphasized in the meeting the importance of preserving the IDF’s qualitative advantage." Gantz and Ashkenazi, both former IDF chiefs, have criticized Netanyahu for allegedly tacitly agreeing to the United States selling the F-35s to the UAE.

Pompeo’s visit to Jerusalem opens an Israeli diplomatic blitz to capitalize on the agreement reached with the UAE. Shortly after the meeting with Pompeo, Netanyahu and Russian President Vladimir Putin discussed the UAE normalization agreement in a phone call. British Foreign Minister Dominic Raab is expected in Israel tomorrow. Much like Pompeo, Raab will meet with Netanyahu, Gantz and Ashkenazi. But Raab also intends to meet with Palestinian Prime Minister Mohammad Shtayyeh. Ashkenazi will fly on Wednesday to Berlin to attend an informal meeting of EU foreign ministers, a first for Ashkenazi as minister. Ashkenazi will update his European colleagues on the UAE deal and discuss sanctions on Iran. Senior White House adviser Jared Kushner and US envoy to the region Avi Berkowitz are expected in Israel beginning of September.

The Foreign Ministry has already started preparing to upgrade the Israeli mission in Abu Dhabi — currently a delegation office to the UN International Renewable Energy Agency — to an official embassy. The ministry is now discussing and preparing for the possible normalization of ties with other Muslim and Arab countries.