The Palestinian leadership seeks to counter US and lsrael diplomacy with Sudan, Bahrain and Oman to secure another normalization deal. 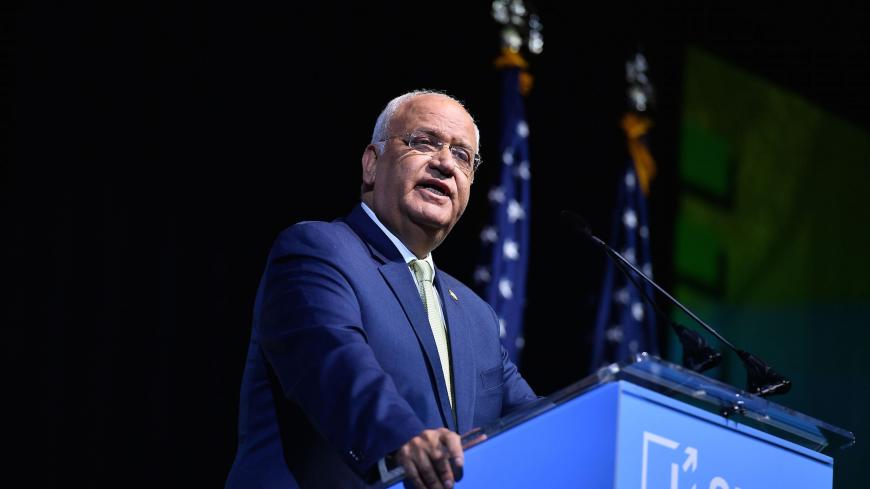 It wasn’t long after US Secretary of State Mike Pompeo ended his short visit to Sudan and the Gulf states that a senior PLO official was in praise of the Arab leaders standing up to the American official. Saeb Erakat, the PLO’s Executive Committee secretary, took to Twitter to send words of appreciation to the leader of Bahrain. “We highly appreciate the position of H.M. King Hamad Bin Issa Al Khalifa of Bahrain. We hope that Mr. Pompeo will use his hearing skills. End the occupation then normalization,” he wrote.

Earlier, Palestinian Foreign Minister Riyad al-Malki had praised Sudan for its principled stand for rejecting the US attempts at “blackmailing Sudan to trade normalization with the lifting of Sudan’s name from countries that support terrorism.”

Erakat’s tweet was followed Aug. 27 with a strong statement by the PLO Executive Committee that included a warning to Arab states not to follow the path of the United Arab Emirates (UAE). The committee “warned against the repercussions of any normalization of relations between the Arab countries and the Israeli occupation, calling on all Arab countries not to follow the footsteps of the United Arab Emirates that recently signed a normalization agreement with apartheid Israel,” the official WAFA news agency reported.

While the tweets and public statements combined both support and warnings, the Palestinian leadership was active on other fronts including calls on the Arab League and the Organization of Islamic Cooperation to meet and denounce the UAE for violating the consensus that has been reached and repeated since Saudi Arabia suggested the Arab peace initiative at the Beirut summit in 2002.

Public opposition and criticism of the UAE normalization deal with Israel acted as a public deterrent to other Arab countries that might have been considering a similar deal following the UAE move. Posters calling Emirati Crown Prince Mohammed bin Zayed Al Nahyan a traitor were plastered all over the Arab and international media — with the exception of the Saudi media. Writers and intellectuals throughout the Arab world called for a cultural and political boycott of the UAE and vicious op-eds were also published denouncing the UAE move while praising the position of Kuwait and later Saudi Arabia, which publicly declared their commitment at an early stage for the Arab peace initiative.

The action of the Israeli government was also a contributing factor in sending a warning to countries considering normalizing relations with Israel. Hours after the UAE-Israel announcement was made, Israeli Prime Minister Benjamin Netanyahu went on air and insisted that the annexation plan was “still on the table” and that Israel no longer feels it needs to support the internationally accepted land for peace formula. The intervention by Israel to block the sale of US F-35 fighter jets further eroded what many had called a major Middle East breakthrough. Meetings by the Americans and Israelis with their UAE counterparts were canceled by Abu Dhabi in protest.

The combination of the attacks against the UAE and the F-35 fighter jets sale debate appears to have resulted in a failed effort by Pompeo, who by the time he reached his last stop, Oman, stopped talking about the need to join the UAE in normalizing relations and reverted back to the need for unity within the Gulf Cooperation Council.

While the Palestinian leadership and the public were busy criticizing the UAE move and warning other countries not to follow suit, there was some blowback for supporters from the Emirates who worry that the attacks could have long-lasting negative effects on Palestinians. Suha Arafat, the widow of late Palestinian President Yasser Arafat, was vocal in the defense of the Emirates insisting that those who opposed the normalization agreement should not oppose the UAE and its historic support for Palestine. “I want to apologize in the name of the honorable people of Palestine to the Emirati people and their leadership for the desecration and burning of the UAE flag in Jerusalem and Palestine and for insulting the symbols of the beloved UAE country,” she wrote. “The difference in opinion does not spoil the friendliness of the cause.”

Another complicating factor has been the presence in the UAE of renegade Fatah leader Mohammed Dahlan. While Dahlan’s senior aide Samir Mashrawi publicly stated opposition to the normalization agreement, many advised against widespread attacks against the UAE.