Israeli companies in the fields of cyber, water management, defense and even diamonds are lining up for launching business ventures in the United Arab Emirates. 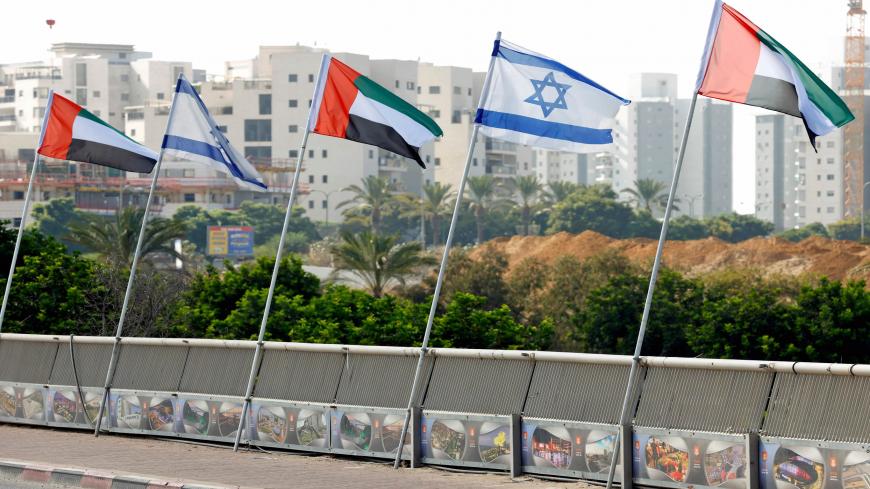 The Aug. 13 announcement that Israel and the United Arab Emirates (UAE) have signed an agreement on the normalization of relations did more than just legitimize existing economic ties between the two countries. Direct relations will also allow for new business possibilities to emerge at a rapid pace. The UAE is not only an oil state, but the economic capital of the entire Persian Gulf region and one of the most advanced business centers in the world. There is good reason it has earned the nickname, “the Singapore of the Persian Gulf.”

Tally Zingher, an expert in economic development who worked for an independent foundation set up by the Dubai government, told Al-Monitor that the guiding vision of the Emirates is to become the leading nation in the region, economically, business-wise and politically, and that it can achieve this by investing heavily in new initiatives. The Emirates have adopted a more global worldview than just about anywhere else in the world. That certainly is the case among the Arab states, but it extends far beyond that.

In practical terms, the UAE serves as a business and commercial center on a vast scale, connecting the Gulf states with the rest of the world. This is where its enormous potential lies, she explained. The UAE operates commercial and economic “free zones” with very little regulation. The Dubai International Business Center, for instance, is considered to be one of the friendliest places in the business, financial and commercial world. Zingher said that the option of establishing a new firm and opening a bank account there with an Israeli passport would be an enormous boon to Israeli companies.

According to Ze’ev Lavi, director of the International Relations Division at the Federation of Israeli Chambers of Commerce, there are now some 300 Israeli companies operating in the UAE, most of them through international branches. Existing restrictions make it very difficult for smaller and mid-sized Israeli companies to do business there because of the expenses and other outlays necessary, when conducting business through a third party.

Lavi added that with formalized relations, the gates to a country with enormous potential will be swung wide open to Israeli businesses and industries. The Gulf states constitute the fourth-largest bloc of importers in the world, with purchases amounting to trillions of dollars per year. Furthermore, Israel has practical solutions for most of the UAE’s most basic, existential needs, including water, desert agriculture, solar energy, advanced food manufacturing, and, of course, several aspect of defense, from advanced weapons systems to cybersecurity.

Zingher added that Israel’s entrepreneurial approach, its tendency to think outside the box and the fact that Israel is a “start-up nation” are all of special appeal to the UAE.

And not just the UAE. The fact that the country is an international commercial center opens up endless opportunities for business, commerce and cooperation with new players, which have avoided such contacts until now. This has the potential to develop in multiple directions. The UAE’s commercial and business centers can serve as a bridge to other countries, with the other Gulf states chief among them.

Israel has had far-reaching security ties with the UAE for a very long time now. Israeli defense firms under the supervision of the Ministry of Defense have been selling advanced weaponry to the UAE, with Israel Aircraft Industries, Rafael and Elbit chief among them. While the actual products being sold are kept secret, it is known that they involve optics, missile detection systems and more. Direct ties will make it possible to expand these deals to include drone technology, active missile defense systems and other systems that Israel already exports to friendly nations.

Another technology in which Israel excels is upgrading and enhancing existing weapons systems, most of them American, including tanks and F-16 fighter jets. One Israeli security source told Al-Monitor that this alone has already saved the UAE and other Gulf states enormous expenditures on the acquisition of new weapons systems. Israeli upgrades have made these purchases unnecessary.

UAE Crown Prince Mohammed bin Zayed, the moving spirit behind this agreement, is a former chief of the UAE air force. Trained as a helicopter pilot at the Royal Military Academy Sandhurst, he was the main proponent of UAE participation in the 1991 Iraq War on the side of the Americans. He has since built up his country’s army into one of the strongest, most advanced in the entire Arab world. As such, he admires the capabilities of the Israel Defense Forces and especially the Israeli air force. The crown prince is also an experienced buyer of military equipment and technologies and familiar with all that Israeli industries have to offer.

An Israeli source involved in the field told Al-Monitor that dozens of Israeli cybertech companies have been active in the UAE for the past few years. “It is no exaggeration to say that almost the entire digital network in the UAE contains at least one Israeli component. Many of these systems were sourced entirely in Israel, even if not explicitly under their Israeli names,” said the source, who spoke on condition of anonymity.

Attorney Yair Geva of Herzog, Fox, & Neeman is intimately familiar with Israel’s business ties with the Gulf states. He told Al-Monitor that current activity takes place mainly through shell companies in Cyprus or Singapore. Now that the country is opening up, Israeli companies can compete openly with major international companies in cybertechnology. Israel is considered a world leader in anti-fraud technologies for payments over digital platforms, and in the secure transfer of general and point-specific date for commerce, and so on.

President of the Israeli Business Sector Dubi Amitai told Al-Monitor that plans are already underway to send a business delegation to the Gulf in the very near future. He noted that there is enormous interest in general, but points to certain fields with inordinate potential for business in the region. Among these is the export of diamonds, gemstones and pearls, since Israel and its diamond exchange have a reputation for excellence worldwide. The opening of a free trade zone for diamonds in Israel would help considerably, and in fact, the Finance Ministry is already looking into just such a proposal. Another potentially lucrative area is desert agriculture, including irrigation and water usage technologies. He added that representatives from the UAE expressed particular interest in this at a conference on the topic in Germany earlier this year.

Economics is, therefore a major impetus for the agreement to normalize relations between Israel and the UAE, and in time, for the other Gulf states. In some ways, it is the fulfillment of the economic component of US President Donald Trump’s “deal of the century,” which was first presented just over a year ago in Manama, the capital of Bahrain. It now looks like that country will be next in line to normalize relations with Israel.