Since the signing of the Abraham Accords, Israel, the United Arab Emirates and Bahrain multiply contacts for joint ventures and mutual investments. 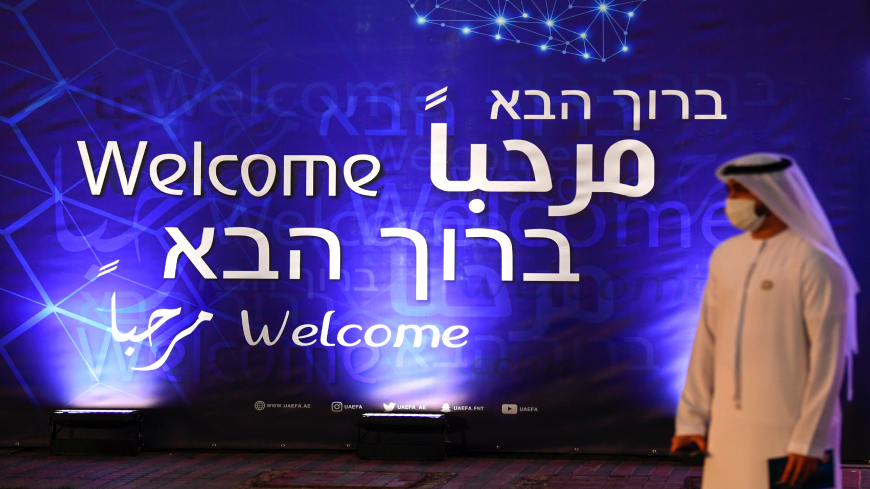 An Emirati man walks past a sign welcoming guests to a ceremony for the signing of a memorandum of understanding between the UAE and the Israeli football assosiations in Dubai, on December 14, 2020. - The UAE Football Association said it would sign a memorandum of understanding with the Israeli Football Association today in Dubai, in the presence of FIFA president Gianni Infantino. The move comes after Israel established ties with the United Arab Emirates, signing an accord along with Bahrain in Washington in September. - KARIM SAHIB/AFP via Getty Images

Even before the first ambassador from the United Arab Emirates arrived in Israel, economic relations between the two countries had been flourishing. Data from the final quarter of 2020, published by Al-Monitor just as the normalization agreement with the Emirates was announced, reveals that business deals worth $1 billion had already been signed between the two countries, with most of those deals involving the sale of Israeli high tech to the UAE. The potential for growth is enormous since the Emirates — and Bahrain — are international commercial centers that import most of their basic needs, especially food and technology but just about everything else as well.

Thus, economics and trade are becoming the underlying foundation for the close relationship that Israel is building with the UAE and Bahrain, but also with Oman and the Saudis, even if in the latter two cases it is taking place behind the scenes. In contrast, the cold peace with Jordan and Egypt persists, decades after the original agreements were signed. The difference between those first-generation peace agreements and the current normalization agreements can perhaps be attributed to persistent memories of the wars those countries fought with Israel or maybe the absence of any real civil economic, and other, non-political relations.

The UAE’s new ambassador, Mohamed Al Khaja, arrived in Israel March 1 and immediately held a series of meetings with Israeli officials. His first meeting took place in the Foreign Ministry in Jerusalem with Foreign Minister Gabi Ashkenazi. It was followed by a meeting with President Reuven Rivlin, to whom he presented his credentials. He met with Prime Minister Benjamin Netanyahu the next day. At each of these meetings, the participants spoke about how the relationship between the countries was based on what Ashkenazi termed “a model of warm and inclusive peace between countries and peoples.” As an example of this, upon arriving in Israel, Ambassador Khaja started a Twitter account in Hebrew, Arabic and English. He soon had tens of thousands of followers, most of them Israelis (he had 31.6k followers at press time).

In his brief speeches and tweets, the ambassador emphasized his intent to expand cooperation between the two countries, especially in civilian matters. So, for instance, during his meeting with Netanyahu, he spoke about plans to collaborate with Israel in the war against the coronavirus. According to one senior source in the Prime Minister’s Office, he was referring to an initiative planned by Netanyahu and Pfizer Pharmaceuticals to create a vaccine development and manufacturing center in Israel to produce the drugs necessary to combat the coronavirus and other diseases.

Countries such as Bahrain have already expressed interest in this initiative. It came up in a Feb. 25 conversation between Netanyahu and Bahraini Crown Prince Salman Bin Hamad Al Khalifa. Netanyahu’s office reported that Khalifa said he would like to investigate the possibility of his nation joining other countries investing in the production of vaccines at a facility planned for Israel.

European countries have also expressed interest in the project. When Netanyahu meets March 4 with Austrian Chancellor Sebastian Kurz and Danish Prime Minister Mette Frederiksen, much of their discussions will center on their joint efforts to deal with the coronavirus over the next few years. Inevitably, this will include talk about the aforementioned center to develop and produce vaccines.

One week before the Emirati ambassador arrived in Israel, the Abu Dhabi Investment Office, which recently opened its doors in Tel Aviv, signed agreements with Invest in Israel and the Israel Innovation Authority. Invest in Israel is an agency established by the Ministry of Economics and Industry to promote investment in various branches of the Israeli economy. The Israeli Innovation Authority is a publicly funded independent agency that provides practical business support to promote innovation and create conditions for economic growth. As part of the agreements, ADIO will work closely with the aforementioned organizations to create opportunities for companies from both countries to cooperate.

The agreements between ADIO and Invest in Israel revolve around a number of initiatives intended to build new business relationships and promote greater understanding of the possibilities available in each market. In addition, ADIO and the Israel Innovation Authority are working together to create a joint program to complete the development of Israeli technological innovations in Abu Dhabi in a broad variety of fields.

According to the agreement, ADIO and Invest in Israel will increase existing cooperative ventures to support mutual investment between the two markets. It will do this by directing opportunities to help business relationships flourish and providing more information about the possibilities available in each market.

Minister of Economy and Industry Amir Peretz told Al-Monitor he is convinced that such a step will contribute to intensifying the economic dialogue between Israel and the Emirates, particularly Abu Dhabi, and to promoting economic, commercial and personal cooperation between the two countries. ADIO general manager Tariq Bin Hindi, said, “The responses from all sorts of Israeli companies have been incredible. We are now in serious discussions with numerous Israeli entrepreneurs, start-ups and businesses over how they can expand their activity to Abu Dhabi. The cooperation agreements that were signed just recently will expedite the formation of new partnerships and productive business opportunities for both our markets.”

Ami Appelbaum, chief scientist at the Ministry of Economics and Industry and chairman of the Israel Innovation Authority, said, “We are fostering mutual economic growth, technological diversity and sustainability in the two regions by combining the strengths of the UAE and Israel. This will lead to the kind of revolution that will reshape the future and impact the lives of people in the UAE, Israel and the rest of the world.”

Another way in which Israel is cooperating with the UAE is sports, especially thanks to the efforts of football coach Avram Grant, who coached both the Israeli national team and the British super-team Chelsea FC. Grant will serve as a lecturer on a project for professional soccer players that was created by the Dubai Sports Council. He will be lecturing to players and coaches representing some of the country’s top teams, including Dubai’s Al Nasr SC, for which Israeli midfielder Diaa Sabia now plays. The program focuses on the next generation of players so that Grant will be lecturing to the teams’ youth divisions.

While agreements such as these are opening up exciting new horizons, there are also serious concerns. As one of Israel’s top diamond traders, Nissim Zuaretz, warns that Israeli traders will begin relocating to Dubai instead of operating out of Israel. According to Zuaretz, the normalization agreement with the Emirates creates ideal opportunities for Israelis: Dubai is home to one of the most active stock markets in the world, it operates as a free trade zone and taxes on foreign companies are minimal.

Zuaretz claims he has already seen Israeli traders relocating there “because it is enticing and it’s just three hours away. What’s the problem? Taxes are nothing, conditions are good. It has good relations [and] ties with the rest of the world, and in any event, much of the work takes place online.” As a result of this development, the Finance Ministry is now discussing the creation of a free trade zone in Ramat Gan for the Israeli diamond industry.

Then there is the political angle. A source in the Prime Minister’s Office referred to this by noting that the election of President Joe Biden has raised concerns that the rate of normalization between the two countries will be slowed down. Nevertheless, sources in Washington have made it clear that even if the attitude toward these relationships have different nuances than they did under the previous administration, a thriving relationship between Israel and the Gulf States is an American interest.