US backs Iraqi progress on budget deal with Kurdistan Region

The Trump administration says it supports Iraqi Prime Minister Mustafa al-Kadhimi's progress so far in working out a budget agreement with the Kurdistan Region. 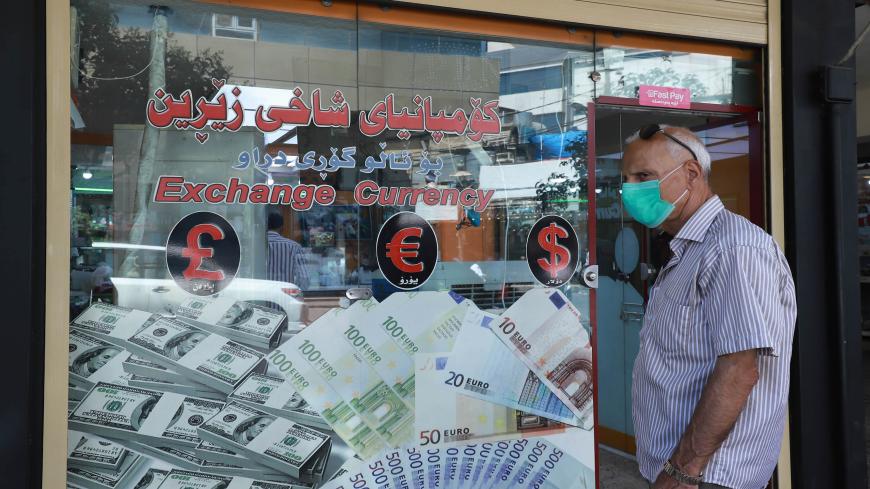 An Iraqi man wearing a face mask due to the coronavirus pandemic, stands at the entrance of a money exchange office in Sulaimaniyah city in the Kurdish autonomous region of northern Iraq, Aug. 4, 2020. - SHWAN MOHAMMED/AFP via Getty Images

"I urged Baghdad to clinch a budget deal with the Kurdistan Regional Government," said Secretary of State Mike Pompeo, speaking at a press conference Aug. 20 following a meeting in Washington with his Iraqi counterpart Fuad Hussein.

According to the terms so far, Baghdad will pay 320 billion dinars ($268 million) to Erbil monthly as a goodwill gesture, and Erbil in return promises to continue the ongoing negotiations with Baghdad over oil exports from the Kurdistan regional territory and to hand over control of the border crossings to Baghdad.

Kurdistan exports 450,000 barrels of oil through Turkey’s Ceyhan pipeline every day. According to previous agreements, 250,000 barrels should go to Baghdad and the rest should go to the KRG budget. However, the Kurdistan Region has not been paying Baghdad its share until now.

Out of Iraq's 22 land border crossings, five are located in the Kurdistan Region and are therefore not under the control of the federal government. They include Haji Omeran, Parviz Khan, Ibrahim Khalil, Faysh Khabur and Bashmaq, as well as the main airports in Erbil and Sulaimaniyah. There are also some other unofficial border crossings from the Kurdistan Region into Iran and Turkey.

Kadhimi has approached this matter with a sense of urgency, seeing it as essential to both his political and economic agenda. The Kurdistan Region is also under pressure to compromise, as it has been experiencing protests by workers who have not been receiving their full salaries.

Kadhimi has sought to assert government control and oversights on border crossings. Many of the latter have been associated with corruption and lost revenues due to the interference of militias and political parties in crossing administration and funding.

The campaign has so far been a success. Iraq's revenues from the outlets has almost doubled after Kadhimi began his campaign, increasing from 36 billion dinars ($30 million) to 62 billion dinars ($52 million).

Iraqi politicians in the south and central parts of the country, however, would like to see the same control extended to the Kurdistan Region.

Despite Kadhimi's success so far with the budget deal, he is being criticized by those who oppose his governance and reform agenda. Parliamentarian Kate' al-Rikabi from Nouri al-Maliki’s State of Law Coalition criticized the prime minister Aug. 12 for his inaction on the Kurdistan outlets — an odd charge since Maliki's moves are actually action — and by complaining it was a concession to the Kurdish parties in return for their support of his government. Other lawmakers asked whether Baghdad can afford any "concessions" to the Kurdistan Region, given the country's overall dire economic situation, and without approval from the Council of Representatives (parliament).

In June, Baghdad transferred 420 billion dinars ($351 million) to the KRG, warning that it would be the last funding from Baghdad before a comprehensive solution to the disputed issues.

The Finance Ministry announced Aug. 17 that it will finalize the federal budget for the remainder of 2020 before October, saying the budget will provide a comprehensive solution to the Kurdistan financial issues including its commitments to Baghdad and its share of the federal budget.

This year, Iraq has been operating without an official budget due to the political crisis and government's transmission.

The Iraqi government is seeking to address the long-standing dispute with the KRG during a difficult political and economic time for the country, and opponents of the prime minister are finding fault with his solutions, while offering none of their own.