The impeachment bid is the latest in a series of measures the new hard-line parliament had promised to take against President Hassan Rouhani in the closing year of his term. 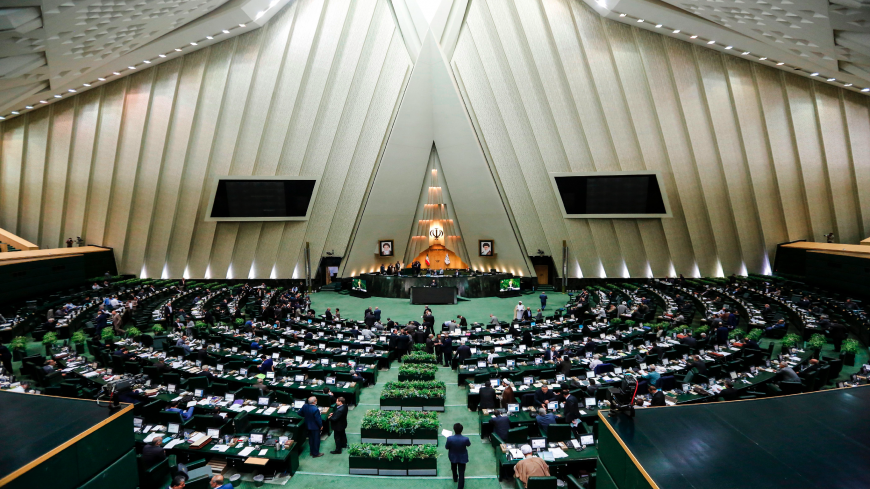 Masoud Karbasian (C), Iran's economy minister, speaks in parliament in the capital Tehran on Aug. 26, 2018, before a vote by lawmakers which saw him impeached. Karbasian was the second minister in President Hassan Rouhani's Cabinet to be impeached in August 2018, following the removal of Labor Minister Ali Rabiei on Aug. 8. - ATTA KENARE/AFP via Getty Images

Iran’s powerful conservatives in control of the country’s new parliament have begun collecting signatures for a motion that could effectively lead to the impeachment of two powerful ministers in President Hassan Rouhani’s Cabinet.

In their draft bid, those lawmakers are set to summon Oil Minister Bijan Namdar Zangeneh to grill him on a list of 20 cases of “incompetency,” which they believe have dealt “serious damage” to Iran’s economy. They have also prepared a lawsuit against the veteran minister, which they plan to file with the Iranian judiciary as early as next week.

“We do believe that his continued presence in the Oil Ministry will no longer serve national interests,” said Ebrahim Rezaee, who is a member of the parliament’s National Security and Foreign Policy Commission. Rezaee also attacked the oil minister over his concentration on selling crude rather than boosting oil byproducts. “During Zangeneh’s tenure, we have seen competitors occupy Iran’s position at the international oil market,” the conservative lawmaker added. Zangeneh is also accused by hard-liners of stalling the development of Iran’s oil industry after a mass exodus by international energy giants following the US departure from the Iran nuclear deal in May 2018.

In a counterargument, however, the Rouhani government says Zangeneh has been facing a series of tremendous challenges trying to mitigate the impacts of US pressure on Iran’s oil industry and get Iran’s crude flow through unconventional markets despite crippling sanctions. In the “economic war” imposed by Washington, Zangeneh has earned the title of “the general” from his supporters.

The other minister facing the rage of conservative lawmakers is Abdolreza Rahmani Fazli. Appointment of incompetent local governors and mismanagement of the aftermaths of floods and earthquakes are among the multiple accusations the interior minister has to answer to. Yet the most pressing issue concerns his handling of the government’s fuel price scheme. The controversial plan was implemented in November, sparking nationwide rallies led by lower- and middle-class Iranians, who argued that the price hikes would further shrink their purchasing power and drain their pockets.

During the unrest, Rahmani Fazli came to be known as the face of the state, leading what was seen as an iron-fist response to the public discontent. According to official data, at least 200 Iranians were killed in the street clashes, while other accounts put the death toll at way higher levels. A few months into the crisis, a group of Reformist lawmakers in the preceding parliament went out of their ways to impeach the same minister. Nevertheless, an informal directive from the country’s Supreme Leader Ayatollah Ali Khamenei made them abort the plan.

Since the start of his second term in 2017, Rouhani has bid farewell to eight ministers in his 19-member Cabinet: Four have resigned, three have been impeached and one has been dismissed. Should the ongoing impeachment motions succeed, Rouhani will have to face yet another crisis in the closing year of his term — one he may not find easy to head off. Article 136 of the Iranian Constitution stipulates that once half of a Cabinet's ministers lose their seats, the sitting president must seek a new vote of confidence from parliament for his entire Cabinet.