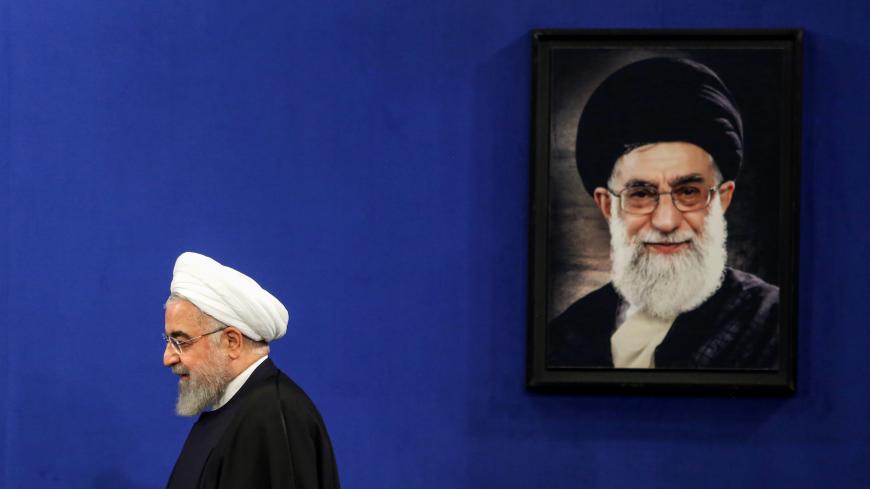 Iranian President Hassan Rouhani walks past a portrait of Supreme Leader Ayatollah Ali Khamenei as he arrives for a news conference in the capital Tehran, on Feb. 16, 2020. - ATTA KENARE/AFP via Getty Images

A televised address by Iran’s Supreme Leader Ayatollah Ali Khamenei to the country’s new parliament July 12 covered a wide range of topics from foreign policy and the domestic economy to the coronavirus pandemic. But what grabbed the most media attention was his rejection of a plan by some lawmakers to impeach President Hassan Rouhani. “The closing year of any administration is usually the most sensitive one. … I do strongly believe that administrations should work hard to the very end of their tenure and fulfill their responsibilities,” Khamenei said.

For weeks, hard-line parliamentarians had been lobbying and collecting signatures to “bring down” the president before his second term came to an end. The project was shut down with a simple statement by the supreme leader that he did not find the impeachment effort to be in the best interest of the country.

Two days after the supreme leader’s speech, one of the dogged architects of the impeachment bid, Javad Nikbin reversed his previous confrontational stance, announcing that the motion “is no longer on our agenda.” The ultraconservative cleric from the Paydari Movement — the parliament’s most hard-line and anti-Rouhani faction — noted, however, “We still need close oversight of the government’s performance.”

Member of the Parliament’s National Security and Foreign Policy Commission Ebrahim Rezaee said though it is the lawmakers' legitimate authority to impeach the president, doing so “is not helpful under the current circumstances.” Another conservative lawmaker, Reza Taghipour, said he feared impeachment could do “more harm than good.”

“After that speech, we will no longer pursue the impeachment,” said lawmaker Ahmad Hossein Fallahi. Still, the parliamentarians have vowed to press ahead with summoning the president and are expected to grill him over his handling of Iran’s crumbling economy.

On multiple occasions during his 30-year leadership, Khamenei has intervened to push back other institutions when their plans have countered “expediency” or endangered the “face of the establishment.” Yet the tactic has also inspired questions about the extent of the Iranian leader's legal authorities enshrined in the constitution.

In 2000, a new parliament of Reformists was determined to overhaul Iranian media legislation after a mass closure of newspapers and the detention of a large number of dissident journalists. The supreme leader blocked the plan in a directive to then-parliament speaker Mehdi Karroubi, who is now under house arrest.

In 2012, the parliament summoned former President Mahmoud Ahmadinejad for questioning, but the move was blocked by a brief message from the supreme leader: “The bid has already gone too far and it needs to be dropped right here,” he wrote to the lawmakers, who withdrew their signatures immediately. “Obedience of the directives of the supreme leader is an obligation all parliamentarians are proud to observe,” former speaker Ali Larijani wrote back to Khamenei.

The supreme leader openly ordered an end to the heated media debates and parliamentary action on a $3 billion fraud case in the Iranian banking system that rocked the nation in 2011 as the biggest corruption scandal in the history of the Islamic Republic. Khamenei has separately argued that despite what critics have said, there is no systemic corruption in Iran. As recently as last November, Iranian lawmakers had to abide by the supreme leader's order not to seek the cancelation of a government fuel subsidy plan despite the widespread public discontent and the deadly unrest it had sparked nationwide.

The embattled president needs the supreme leader’s support. On the eve of the fifth anniversary of the Iran nuclear deal, the accord’s prospects appear dimmer than ever, leaving Rouhani an easy target for his hard-line opponents. The impeachment bid was motivated in part by the deal, which Rouhani's critics say has brought Iran nothing but empty promises and “humiliation.”

Despite escaping the impeachment bid unharmed, there is more yet to come for Rouhani. The new uncompromising parliament continues to oppose the administration with almost every single move it makes, particularly in its push to take the helm in the fight against the ailing economy.

In a televised address earlier this week, parliament speaker Mohammad Bagher Ghalibaf unveiled an economic road map that set out a new five-year vision for economic stability. Rouhani supporters see it as a clear example of Ghalibaf trying to frame Rouhani as incompetent.

The day before the televised address, Rouhani and Ghalibaf took part in a meeting of the Supreme Council for Economic Coordination. While state media coverage of the session presented a picture of consensus, Reformist paper Etemad reported on a verbal clash between Rouhani and Ghalibaf, in which the president allegedly criticized the parliament speaker for independently presenting an economic package to the supreme leader. “It is the president who commands the economic war,” Rouhani reportedly complained.

“Then let it be and let’s find out if you can handle the crisis or you will simply continue to make speeches … the fruit of which is the country’s current economic turbulence,” Ghalibaf hit back, according to Etemad. Unsurprisingly, government spokesperson Ali Rabiee dismissed the bitter exchange as “fake news.”