Extremists among the opponents of Iranian President Hassan Rouhani are calling for his impeachment and even execution after he suggested rapprochement with the United States could happen. 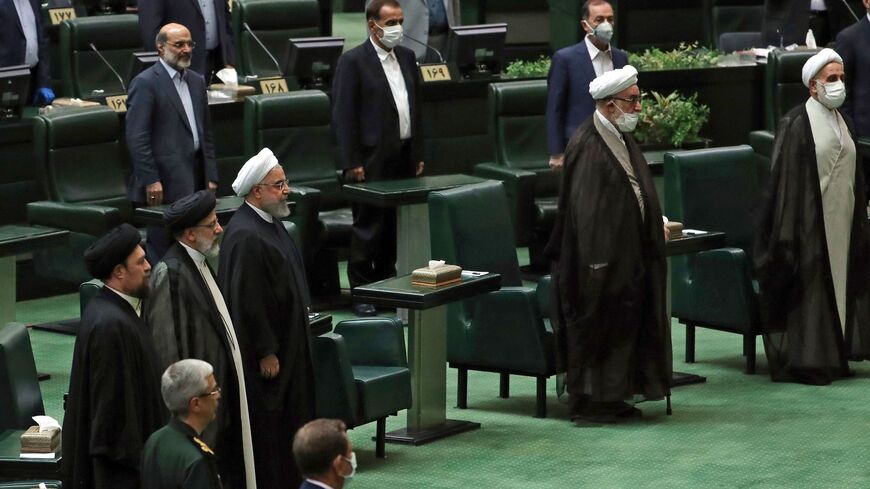 Iranian President Hassan Rouhani attends the inaugural session of the new parliament in Tehran on May 27, 2020, following February elections. - AFP via Getty Images

“We should make peace when the right time has come,” said Iran’s President Hassan Rouhani last week in a historical reference to Islam's second Shiite leader Imam Hassan, who clinched a peace agreement with his enemies in the seventh century.

Perhaps Rouhani did not anticipate the tremendous backlash from his opponents, who accused the moderate president of exploiting and distorting Imam Hassan’s story to justify his willingness for negotiations with the United States.

“Mr. Rouhani! Today, the absolute majority of the Iranian public demands nothing less than your dismissal and punishment,” tweeted Mojtaba Zolnouri, a hard-line lawmaker from the Paydari camp, which is shaped by the staunchest Rouhani critics known for their intolerance toward engagement with the West. Zolnouri, who also chairs the Iranian parliament’s influential National Security and Foreign Policy Commission, went further: “The supreme leader should issue a ruling on hanging you a thousand times.”

Back in July, Zolnouri and some fellow lawmakers collected signatures on the parliament floor for an impeachment bid, which could have effectively put a premature end to Rouhani’s second term. The group had to stand down after Supreme Leader Ayatollah Ali Khamenei declared in a televised speech that he wants the sitting president to actively stay at the helm to the end of his tenure.

Zolnouri and his team held a gathering in the city of Qom on Monday to promote the impeachment push over a long list of perceived failures in what they called a litmus test for the parliament.

On the same day, Ahmad Amir-Abadi Farahani, a member of the parliament’s presiding board, announced, “We have decided to abort the impeachment.” According to Farahani, impeaching the president would be a two-month administrative process, after which his first vice president would have to take over for another three months, making impeachment pointless as the next president is set to be chosen in early June.

The impeachment seekers have not found significant backing from ultraconservative papers. Despite their scathing attacks on the Rouhani administration, those outlets seemed unhappy with the timing and warned against inviting the political chaos that would ensue. According to Kayhan, a hard-line daily funded by Khamenei’s office, impeachment would only serve an American project of “headless governments” that Washington seeks to implement in Iran, Lebanon and Iraq with the aim of destabilizing the three countries.

Nevertheless, Zolnouri insists that his impeachment plan is not off the agenda. He has called on other lawmakers to come forth and sign on to bringing down the president. Some Iranian social media users are expressing support with a Persian hashtag about “saving the country.” From Zolnouri and his allies' standpoint, the Iranian president’s talk of peace came to prepare the Iranian public for rapprochement with the United States as polls predict victory for Democratic nominee Joe Biden.