Parliament Speaker Mayor Mohammad Bagher Ghalibaf starts his new job at a time when Iran faces great challenges, with the conservatives set to dominate Iranian politics in the near future. 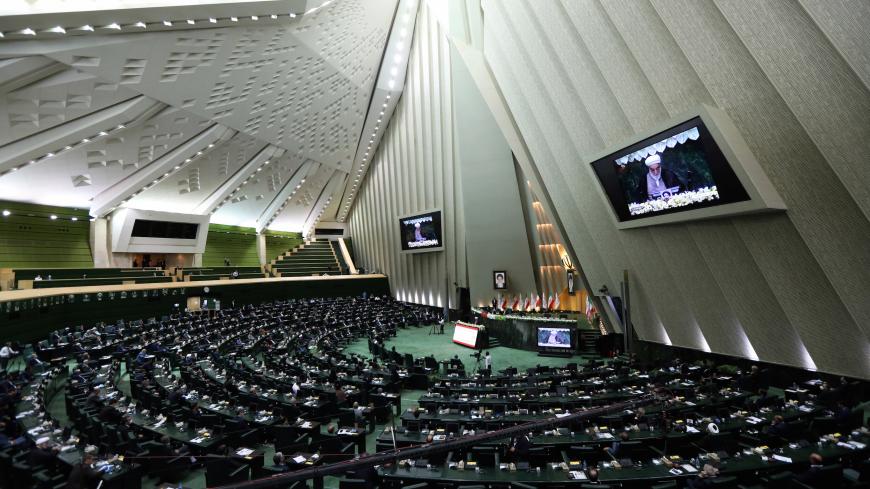 A general view of the Iranian parliament, during the opening ceremony of Iran's 11th parliament, as the spread of the coronavirus continues, in Tehran, Iran, May 27, 2020. - WANA (West Asia News Agency) via REUTERS

Iranian President Hassan Rouhani addressed June 10 his Cabinet and spoke about the country's recent struggles, saying that "the resilience of the Iranian people" and their struggle against the coronavirus pandemic and US sanctions will be "recorded in the history of the country." While Iran's recent struggles have yet to be recorded, the new parliament, which began its first session May 27, comes into office at a time of compounding crises.

Amid the backdrop of the coronavirus pandemic, an economic recession and US sanctions, the power of Iran’s conservative establishment has dramatically increased, setting the stage for a new era of hard-line politics. In a sharp turn to the right, Iran’s legislative body is now dominated by multiple conservatives factions, virtually all of whom campaigned against Rouhani’s administration and his platform of external engagement and internal moderation. Conservative politicians and critics have assailed Rouhani for the Iranian nuclear deal and the US "maximum pressure" campaign.

Leading this new parliament is former Tehran Mayor Mohammad Bagher Ghalibaf, the first Islamic Revolutionary Guard Corps' (IRGC) general to be speaker of the Iranian parliament. Ghalibaf joined the IRGC in 1980 during the Iran-Iraq War, where he quickly moved up the ranks. Later in his career, he developed sway within the IRGC’s growing political and economic network that peaked after he became head of the massive Iranian engineering conglomerate Khatam al-Anbia, which is seen by many as an extension of the IRGC’s economic influence in the country.

Overtly ambitious, he served as mayor of Tehran between 2005 and 2017 and ran for the presidency in 2005 and 2013 with varying degrees of failure. He capped off his tenure with another failed presidential bid in 2017, ultimately ceding the conservative ticket to now-Judiciary Chief Ebrahim Raisi, who was soundly defeated by Rouhani. Ghalibaf’s time as mayor of Tehran was mixed, gaining plaudits for modernizing the capital’s aging infrastructure, but plagued by allegations of corruption.

Ghalibaf’s speakership will oversee a 76% conservative majority and a healthy contingent of his fellow IRGC members, with as many as 24 joining the ranks of conservative members of parliament, continuing a trend that has seen more former IRGC commanders join parliament over the years. While the IRGC is notoriously factional, its members' growing power in parliament will give their patronage networks more opportunity to expand their economic entrenchment in the country. Where previous parliamentarians have spoken out about the IRGC’s economic influence, former commanders elected as parliamentarians will now be able to neuter one of the only governmental bodies that could place a check on their growing influence.

Conservative members of parliament gained a majority after Iran’s Guardian Council oversaw a massive purge of sitting legislators and aspiring candidates in the 2020 elections. Ninety sitting members of parliament were barred from running — more than a third of the incumbents who were seeking to run. The purges and disillusionment toward the government following the November 2019 protests, combined with growing fears of the coronavirus pandemic, resulted in an abysmal 42.5% turnout — the lowest since the revolution.

All of these domestic dynamics swirl under the storm created by the Trump administration's decision to withdraw from the nuclear deal and impose a maximum pressure campaign, which has levied crushing sanctions that have devastated the country. After spending the 2016 and 2017 campaign cycles promising change, and with the Joint Comprehensive Plan of Action, Rouhani’s legacy in tatters and the economy in free fall, Rouhani and the moderates inside Iran have virtually no accomplishments to show for. Rouhani will most likely finish his final term as president hemmed in by hard-liners in parliament opposed to his agenda. While Iran’s Majles (parliament) may lack substantive tools to affect Iran’s foreign policy, Ghalibaf, who unsuccessfully ran against Rouhani twice for the presidency, maintains a loud bullpit that can be used to lambast the president and excoriate his policies. Moreover, the new conservative majority will be able to gridlock Rouhani’s domestic agenda, including any legislation he supports and annual budgets.

Despite all the factions left of center being sidelined in the current parliament, Ghalibaf will still have to contend with the myriad of political parties that comprise his conservative majority. This includes as many as 50 supporters of former President Mahmoud Ahmedinejad, including Amir Hossein Qazizadeh Hashemi and Ali Nikzad, who are both vice speakers of the assembly, and the ultraconservative Paydari Front, led by Mostafa Mir-Salim who challenged Ghalibaf for the speakership and who still holds considerable sway among hard-liners. It is unclear how long the unity between these factions will last.

The first week of the new parliamentary session saw many performative gestures but other legitimate indicators of how Ghalibaf and this parliament may proceed in the coming years. In his first speech on the Majles floor, Ghalibaf stuck to familiar positions espoused by Supreme Leader Ayatollah Ali Khamenei, saying that negotiations with the United States would be "fruitless and harmful,” and instead championed “vengeance” against the killing of Gen. Qasem Soleimani in January.

Ghalibaf, who is less of an ideologue than many conservatives and more pragmatic in his political leanings, will most likely attempt to wed himself to positions espoused by the supreme leader. As of now, Iran has adopted a policy of strategic patience, waiting for the results of the US election before determining a more long-term strategy. Ghalibaf doubled down on his rejection of negotiating with the United States when he commented on a tweet from US President Donald Trump concerning the recent prisoner exchange, saying that Iran must not stop the struggle and reject compromise with the “nonbelievers.”

Internally, a conservative majority in parliament will most likely give Iran’s unelected state apparatus an explicit pass to tighten its screws on Iranian society. The November 2019 protests and the subsequent crackdown that killed hundreds of demonstrators marked one of the most brutal periods of government repression since the 1979 revolution. Many Reformist members of parliament spoke out against the crackdowns, including prominent Reformist parliamentarian Mahmoud Sadeghi — now convicted on corruption charges — who wrote on Twitter that state TV should accompany its footage condemning protesters with footage of a “few [of them] being shot.” With many parliamentarians affiliated with state organs now in the new parliamentary majority, these kinds of condemnations will evaporate, as will the semblance of legitimate investigations into state repression, allowing the establishment free rein to solidify its grip on internal dissent.

As the pendulum of Iranian politics swings back toward the conservatives, and a new wave of authoritarianism sweeps the country, Ghalibaf will be leading the parliament at a crucial time for Iran. On his watch, the country must manage a pandemic, a sanctions-induced recession, a presidential election in 2021 and perhaps the succession of Supreme Leader Khamenei. Even though Iran has entered an era of conservative dominance, what remains unclear is how long it will last and if this will usher permanent domination of Iranian politics by forces within Iran who are hostile to accommodation with the West and liberalization at home.