President Hassan Rouhani's latest speech in defense of the Iran nuclear deal prompted a barrage of attacks from hard-liners, who have long demanded he apologize for the "humiliating" accord. 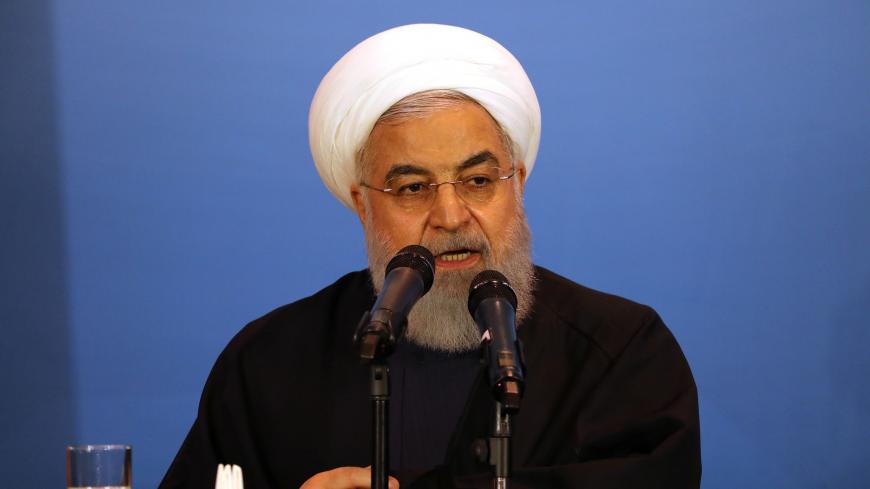 Iran's hard-liners have spared no opportunity to attack President Hassan Rouhani and his team of nuclear negotiators ever since Tehran clinched the Joint Comprehensive Plan of Action (JCPOA) with major world powers back in 2015.

To those relentless critics, the US administration's pullout from the pact last year brought a moment of triumph. They accused Rouhani of refusing to listen to their advice and avert the humiliating loss. With little of the JCPOA's economic relief delivered, the hard-liners insist that it is high time Rouhani apologized over what they view as damage inflicted upon the Islamic Republic. Unsurprisingly, Rouhani's refusal to do so in his latest speech Aug. 6 reignited the rage.

According to the ultraconservative newspaper Javan, Rouhani should have recited an elegy in lamentation of the deal rather than praising it. The Iranian president was addressing a ceremony at the Foreign Ministry in Tehran. The event, Javan argued, was expected to mark the "demise" of the nuclear deal, but Rouhani used it to "pose as a hero."

In the speech, Rouhani defended the phone call with his then-American counterpart Barack Obama in 2013 as the right decision that accelerated the success of the nuclear negotiations. Javan, however, interpreted the comment as intended to normalize possible talks with American officials in Rouhani's upcoming visit to New York for the UN General Assembly summit in September.

"Through the nuclear talks, we intended to tell the world that the US and some of the western states … were lying," Rouhani said. Many hard-line media outlets used his words to unleash attacks against the president. Raja News, which represents the most diehard section of the Rouhani critics, argued that Rouhani had repeatedly claimed that the goal behind the JCPOA was a "better livelihood" for Iranians, but had merely used it to win voters. "To prove his competence, Rouhani is now relying on a piece of torn paper, which itself has already turned into a matter of dispute between Iran and the West."

The same lines were reprinted by Kayhan, which is affiliated with the office of Supreme Leader Ayatollah Ali Khamenei. The paper placed Rouhani in the hot seat for "pinning the economy to the JCPOA" while unprecedented inflation has hit ordinary citizens hard. The deal, according to Kayhan, not only halted the centrifuges but put a brake on the Iranian economy as well.

Earlier this week, Kayhan slammed Foreign Minister Mohammad Javad Zarif, who emphasized at a presser that the JCPOA is no two-page agreement but a lengthy "150-page document." "The long list of those concessions you offered to the other side would have never fit in two pages," Kayhan argued in a harshly worded response.

Zarif has time and again tried to allay those fears, insisting that despite what the critics allege, the nuclear deal was comprehensive to accommodate two sides' mutual mistrust. He reaffirmed his position in yet another speech Aug. 7, with his signature diatribe targeting the US administration and its regional allies. "We never purchase our security, nor do we ever put it up for sale," he asserted, referring to arms deals between the United States and Iran's Middle East adversaries, most notably Saudi Arabia.

"They are pressuring Iran and trying to zero out our oil revenue," Zarif said of the US "maximum reassure" campaign. "But we will continue to secure our people's food," he added, assuring listeners that Tehran will find a way to circumvent the US sanctions.