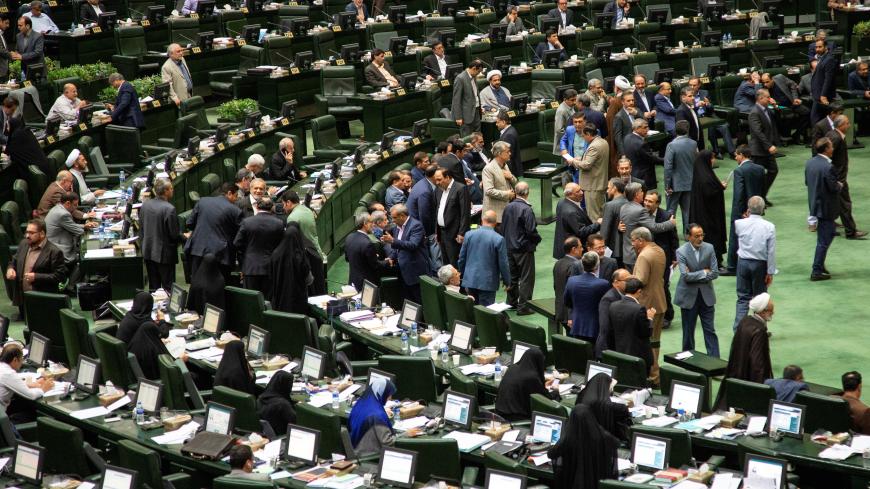 Days could be numbered for President Hassan Rouhani's ministers of oil, interior and education as he faces one tough challenge after another in the remaining half of his term in office.

Despite being dominated by pro-Reform camps largely aligned with the president's policies, the Iranian Parliament seems to be gearing up for a fresh battle against the Rouhani government, launching attacks from multiple directions. At least three impeachment bids are currently being closely pursued by lawmakers representing various factions.

Signatures have already been collected from hard-liners against influential Oil Minister Bijan Zangeneh. The bid revolves around what those parliamentarians view as the old manager's failure to tackle fuel smuggling, "disinformation" regarding a recent controversial gasoline subsidy scheme and "dishonesty" about gasoline price jumps.

The Rouhani government has been under relentless fire and facing a legitimacy crisis since Nov. 15, when it announced a contentious gasoline subsidy-cut plan that included higher prices. The plan threw the country into several days of chaos and violent protests that according to the latest Amnesty International report left at least 143 protesters dead. To contain the fast-spreading flames, the Iran Security Council chaired by the country's interior minister imposed a massive nationwide internet shutdown. One week after the protests broke out, connectivity to fixed-line wifi networks started to be restored but mobile internet remained almost entirely out of service on Nov. 26.

Interior Minister Abdolreza Rahmani Fazli is now facing an impeachment threat similarly to the oil minister but coming from the leading Reformists including outspoken lawmaker Ali Motahari, who has no intention of backing off unless the Supreme Leader Ayatollah Ali Khamenei directly intervenes. Here, too, the recent fuel price hikes play a central role as well as "the minister's failure to prevent the social and security backlash from the plan and the resulting bloodshed, injuries and arrests."

The third target in the lawmakers' push is Education Minister Mohsen Haji Mirzaee, who is targeted over a variety of perceived inadequacies including a shortage of staff across schools in the country.

Earlier this week, Agriculture Minister Mahmoud Hojjati resigned from his post, dodging an impeachment session scheduled for Nov. 26, when he was widely expected to lose his job over inflation in the meat market and his mishandling of agricultural surplus exports. Pro-reform newspaper Ebtekar described the resignation as Hojjati's strategy to escape responsibility. Javan — a hard-line paper linked to Iran's Islamic Revolutionary Guard Corps — also attacked Hojjati for refusing to stand accountable for his failures. The paper detected a larger pattern of irresponsibility in a "government reluctant to stand before parliament" and ministers who avoid being publicly grilled via last-minute resignations.

Last year, Mohammad Shariatmadari, the powerful minister of industry, mines and trade, stepped down ahead of a parliamentary impeachment session. The same occurred in three other cases including one involving Abbas Akhondi, the former minister for roads and urban development.

Under Article 136 of the Iranian Constitution, a sitting president is required to seek a second parliamentary vote of confidence for his entire cabinet once half of his ministers have already been replaced. Since the start of his second term in office in 2017, Rouhani has lost seven ministers of his 19-member cabinet. The ongoing impeachment bids could, therefore, deal a severe blow to the Rouhani cabinet and send his aides lobbying in parliament corridors to thwart the last crisis he needs.