Why Iran could be approaching hyperinflation in coming years

The asset markets in Iran have been witnessing sharp surging spikes in prices in the recent weeks and months on the back of astonishingly rising money supply. 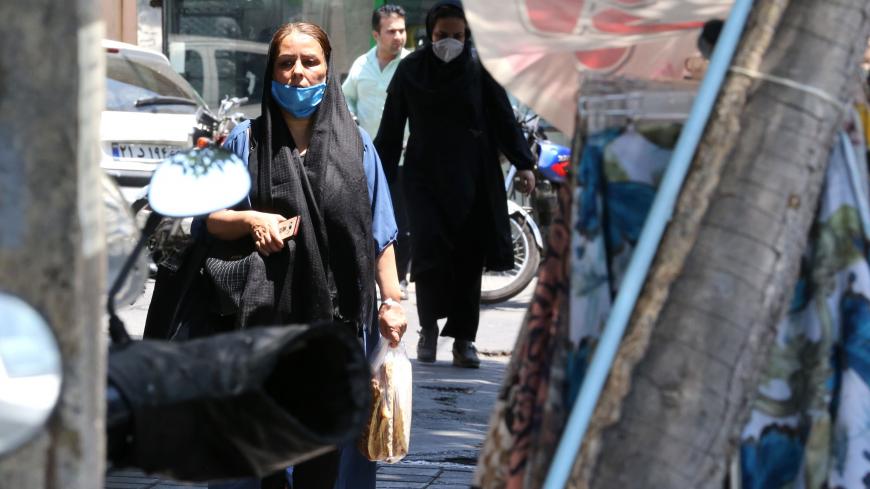 A mask-clad Iranian woman shopper walks on a street in the capital, Tehran, amid the ongoing coronavirus pandemic, on July 19, 2020. Economists worry that a large rise in the number of Iranian rials in circulation could cause galloping inflation in the country. - ATTA KENARE/AFP via Getty Images

The asset markets in Iran have been witnessing sharp surging spikes in prices in the recent weeks and months on the back of astonishingly rising money supply. The Tehran Stock Exchange Index, with a return of more than 147%, was the best performing market, followed by the gold, foreign exchange and housing markets with a return of 30.5%, 24.8% and 19.1% respectively in the spring (March 20-June 20).

Some economists say they believe that doubling of the amount of liquidity over the period of just three years has set the stage for a dangerous economic situation. Should this trend continue and not be curbed with proper macroeconomic policies, it is likely that chances to eliminate rampant inflation might be missed and the failure could eventually lead to hyperinflation such as Venezuela is experiencing. Those economists say the performance of the Iranian economy in recent years indicates that two decisive factors have already occurred. First, liquidity has been climbing significantly in recent years. Second, with the considerable reduction in oil revenues, the relationship between liquidity and inflation has become more strongly connected as the time interval for liquidity to impact inflation has dramatically shortened.

Statistical calculations show that the need for liquidity grows by an average of about 9% per year. In that case, any growth of liquidity beyond this amount would inevitably culminate in inflation. Of note, liquidity growth, in various time periods, has been more than 20% on average in the Iranian economy. As a result, there has always been a chronic underlying factor for inflation to rise.

However, Abdolnaser Hemmati, the governor of the central bank, says he believes the growth of the monetary base and liquidity is not significantly at odds with past norms. He has claimed that the rising worries among the public about possible hyperinflation are totally unfounded. In a statement on May 26, the central bank announced a framework for targeting inflation. Accordingly, the central bank intends to keep inflation in check at a rate around 22%, with a range of plus or minus 2%, over the current year. Needless to say, the macroeconomic data to date indicate it will be very difficult for the central bank to meet this grand goal.

As a matter of fact, the volume of liquidity is a nominal variable. Should the nominal variable change, either the actual amount or the nominal variable ought to change in order for the economy to eventually reach equilibrium. The real sector of the economy can meet rising demand only when it grows in tandem with liquidity. Not only is there no meaningful growth, but there is also no sign of minimal growth under current economic policies. As it is not viable to raise production by 20% in order to strike a balance, the variable that then would help balance the volume of liquidity would be to increase the prices of goods and services — something also known as inflation.

Additionally, the inflation rate announced by the central bank is not the actual rate perceived by most Iranians. The inflation rate calculated by the central bank includes the average price of more than 475 items. But most people will not use the majority of these items in their daily life. What matters is the inflation rate of the basket of goods and services used by Iranian households: food and beverages, fruits and vegetables, rent, health care, education, transportation and energy. The average inflation rate of the above-mentioned items, excluding the little-used items, is likely to stand higher than official figures on inflation. Of note, the inflation rate from June 21-July 21, reported by the Statistical Center of Iran, was about 6.4%. The rate is already higher than the one registered in many developing countries, being less than 3%, for a whole statistical year and not just for a single month.

It is noteworthy to say that the inflation rate should not deviate from that of liquidity growth. Since rising liquidity has not led to spike in economic growth, its accumulation is prone to greatly increase the risk of rampant inflation or even hyperinflation in the coming years.

Finally, should the stock market not have absorbed the extra liquidity, the economic situation could have been much worse than it is now. But, worryingly, government and policymakers seem to have banked considerably on the stock market and are not taking into account how this market might not be able to contain liquidity for a long period of time.

In sum, with a budget deficit of about 2 quadrillion rials ($8.5 billion), if corrective policies are not applied anytime soon, it is likely that Iran could witness higher and higher inflation in the ensuing months. This could lead to a tsunami of hyperinflation or the so-called dollarization of the economy in the years to come.