An Egyptian historian created a website that reviews the history of Cairo through several historical maps, texts and photographs. 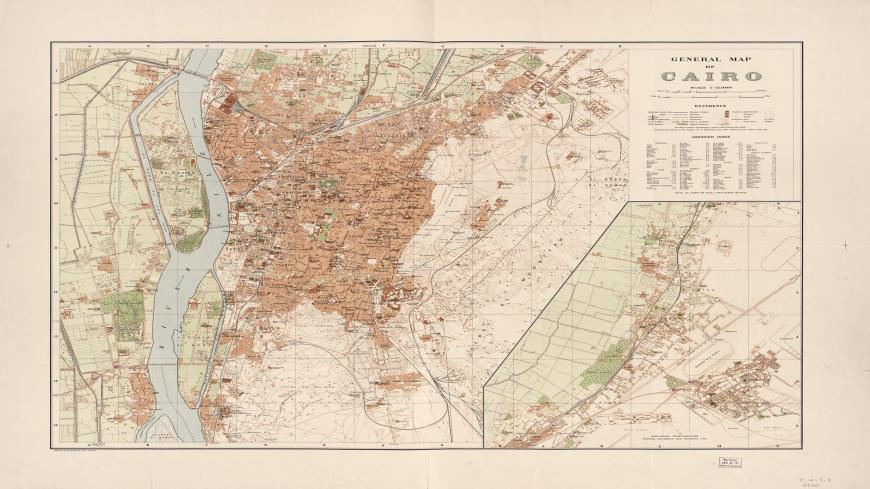 A detailed map first published in the book “Description de L’Egypte” (1809-1828) shows the environs of Cairo and Giza as they stood during the French expedition in Egypt. A feature article tours the residential margins of the Egyptian capital at the time of the British occupation. A video shows a series of astonishing aerial photographs from the city shot in 1904 by Swiss photographer and ballooning pioneer Eduard Spelterini.

The archive of Al-Madaq is a website that reviews the history of Cairo through a number of singular maps, texts, photographs and artworks in order to rediscover them as valuable sources to read and understand the city. The site, which has been in development since 2018 and has recently launched its Arabic and English version, aims to provide a research tool in the form of an open access archive to the general public, with special focus on an Arab-speaking audience.

“During the January [25] Revolution and the years that followed, me and other Egyptian academics were asking [ourselves] what is the value of our academic knowledge production,” said historian Shehab Ismail, project founder and director of Al-Madaq, reflecting on the motivations behind the project. He told Al-Monitor, “We were asking questions about what we are doing, who we are creating historical knowledge for and how we can reach an Arab-speaking audience."

The result — Al-Madaq — is composed of three main elements. The first of these contains a collection of 14 historical maps in high resolution that traces a particular evolution of Cairo starting from the French expedition map of 1809 until a general map from 1920 by the Egyptian Survey Department. The maps, some of which contain tens or even hundreds of sheets, are geotagged onto satellite images in a way that allows the public to aggregate them and compare them to the current city of Cairo.

The rich maps present a variety of information about the city, going from more common references to buildings, facilities and roads to more specific data on tax boundaries and land titles. One of the oldest is a general plan of Cairo published in 1874 with the authorization of Egypt's Khedive Ismail Pasha that contains a list of almost 300 mosques and around 30 churches. Another one, from 1892, corresponds to a meticulous urban survey that details the owners of each piece of land from the parts of Cairo it portrays. For Ismail, this is the section with the greatest potential.

“The main thing I want to spend time on [in the future] is the map page — on how to make it a better research tool,” Ismail said. He explained that one of his main ideas is to develop a tool that would allow the public to search for specific information, such as a monument that is no longer in place, by using as references the features that appear in all the historical maps. “This would require digitalizing all the information [in the maps] and would make it a kind of Google Maps of historical Cairo,” Ismail added.

The second part of the archive — called Panorama — features a series of articles that explore the residential margins of Cairo during the British colonial time in Egypt in an attempt to review the factors that shaped the geography of the city in that era and create an alternative narrative of its history. So far, this section — which is based on the author’s doctoral research — shows one article that includes nine spots going from the hills of Mokattam down to the famous old neighborhood of Bab al-Shaariya. Other articles — also containing photographs and graphics from the places it traces — will be uploaded in the future.

According to its author, Cairo underwent a critical change during the British colonial era, as shown by the expansion of the urban development area, population growth, development of infrastructures and emergence of the middle class and the urban poor that Egypt’s capital experienced at the time.

The third and last part of the archive contains collections of historical photos and videos portraying Cairo from different angles. The first of them, for instance, features the work of Eduard Spelterini in the city in 1904 and is based on the extracts pertaining to Egypt’s capital that appear in the book "Eduard Spelterini: Photographs of a Pioneer Balloonist.” The book reproduces the images taken from the original glass negatives used by Spelterini to document his journey around the globe in a hot air balloon. From these, the archive contains four impressive images from well-known scenarios in Cairo, such as the Azbakiya Gardens and the island of Gezira.

The archive can also provide a useful tool for those interested in exploring Cairo, given that some of its resources — like the maps — can be used as well to trace old monuments that are not even listed by the Ministry of Tourism and Antiquities.

“If someone is interested in discovering Cairo, this project can help them in very specific ways,” Ismail said. “I knew that during the reign of Muhammad Ali — the viceroy that ruled Egypt from 1805 to 1848 — a number of windmills were built on elevated areas to grind cereals and things like that. I knew that these existed and I wanted to look for them, so I used the map in an area [the hills in Fustat, in the south of Cairo] where I expected to find them. Then when I switched to the satellite map I saw traces of them, so I could go there and actually photograph some of them.”

In order to take Al-Madaq outside of the digital sphere and bring it back to the same streets it came from, Ismail also plans to organize in the future public events such as lectures, exhibitions and workshops about the archive and the tools it provides.