An Istanbul exhibit looks at the photographic albums that Ottoman Sultan Abdulhamid sent to German Chancellor Otto von Bismarck in an effort to entice Germany to invest in Anatolian railways. 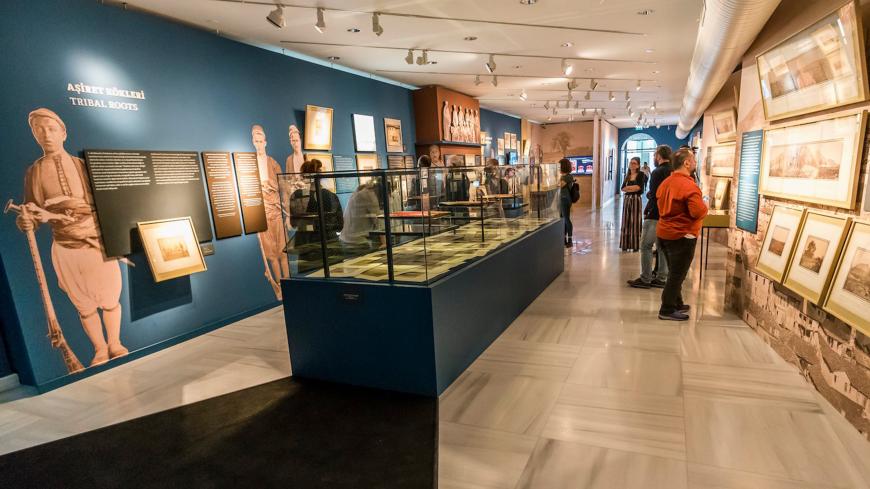 Visitors explore "Ottoman Arcadia: The Hamidian Expedition to the Land of Tribal Roots (1886)," an exhibition at the Research Center for Anatolian Civilizations of Koc University, Istanbul. Posted May 22, 2018. - Facebook/Anamed.kocuni

It all began in Germany last year, when the auction house of Reiss & Sohn put on offer some 200 lots of memorabilia from Otto von Bismarck's estate. Among the items were photographic albums presented to the German chancellor “by admirers and devotees from all over the world,” including from Ottoman lands. Indeed, a set of three folio-size red velvet volumes, inscribed with Sultan Abdulhamid's calligraphic monogram, or tugra, were acquired for the extensive private collection of the Turkish business titan Omer Koc.

The three volumes are the centerpieces of “Ottoman Arcadia: The Hamidian Expedition to the Land of Tribal Roots (1886),” an exhibition at the Research Center for Anatolian Civilizations at Koc University in Istanbul. They are displayed in a glass case like crown jewels, while the folios, which were not bound, have been removed for display. The exhibit features some 150 extremely well-preserved, cardboard-framed sepia portraits and landscapes with handwritten notes in French and Ottoman.

“The Bismarck gift albums were the byproduct of a mission sent by the Ottoman sultan to survey and document the ancestral lands of the dynasty, searching for legitimacy through foundation myths,” Ahmet Ersoy, one of the curators, explained to Al-Monitor.

The landscapes include views from Marmara and central Anatolia: Sogut, the founding capital of the Ottoman Empire, and Bilecik; Eskisehir and Yenisehir; and Iznik and Bursa, the empire's first major capital. All are lands that the Ottoman Lords of the Horizon, an epithet of the sultans, conquered one after the other. In the albums, these places are conceived as units, arranged as a narrative sequence of territorial expansion and political consolidation from the tomb of Ertugrul, the father of the eponymous Osman, to the successive capitals of the empire.

One should not be surprised. According to Ersoy, professor of architectural history at Bogazici University, the iron-fisted Abdulhamid was “one of the most media-savvy rulers of his time.” Abdulhamid ordered the creation at Yildiz Palace of a multilayered repository of images — ultimately more than 36,000 photographs — along with materials ranging from print journals to statistical data. He had been quick to recognize how visual media could be used as a political tool, for domestic as well as international purposes.

The unique gift sent to Bismarck was part of a cultivated courtship begun during a phase of rapprochement between the Ottoman and German empires. It was also part of a business proposition. The Ottomans were trying to secure funding for new railway lines in the Marmara region. The albums, through a targeted selection of photographs, highlighted the region's sites, serving as a visual prospectus, as it were, for a potential investor.

The expedition to the town of Sogut, south of Istanbul, focused on architectural heritage. For example, monuments and official buildings photographed in disrepair were promptly restored or even rebuilt, as images from the exhibition show.

After presenting background on the expedition teams and aims, the exhibition closely follows the order of the albums: landscapes and cityscapes, historical monuments, daily and social life. The design and layout of the exhibit are engaging. Images and descriptions are perfectly balanced and flow smoothly. A few videos and animations complement them. One multimedia module explains the functioning of Abdulhamid's archive, which even housed a small photographic studio.

The next section of the exhibition introduces visitors in more detail to the expeditions and features materials from it. The expedition team of 10 military officers produced not only a multitude of photographs, but also written reports, maps and a few oil paintings. At least 12 photographic albums were assembled, with nine kept for a time at the Yildiz Palace. Those that remain are currently housed at Istanbul University.

The most striking part of the exhibition is the large section devoted to what professor Ersoy calls the “first comprehensive visual record of tribal and nomadic life in 19th-century Anatolia.” It consists of images of Turkmen semi-nomads, or “yoruk,” recently settled tribal groups native to the region and present at the birth of the empire. They were documented in their environs, in pastures and on plateaus, and presented in full traditional attire.

These ethnographic images portray the yoruk as primeval remnants of a past fixed in time. They attempt to capture the Turkish essence of Ottoman identity through a proto-nationalist vision not yet fully assessed by contemporary historiography. Interest in this identity was evident at the exhibit, as some self-styled nationalists headed directly to the “Tribal Roots” section to revere their ethnic ancestors. Others wrote enthusiastic comments in the visitors' book hailing Abdulhamid as a timeless political hero and forerunner.

“Ottoman Arcadia,” devoid of hagiographic content and propagandistic purposes, nonetheless offers proof of the astonishing power of photographs to shape perceptions and ideas even more than a century after they were taken.

The exhibition runs through Sept. 30.