Why is Turkey reviving an Ottoman sultan?

A great Ottoman sultan-caliph is being re-popularized in today’s Turkey with a clear political intention: legitimizing authoritarian rule. 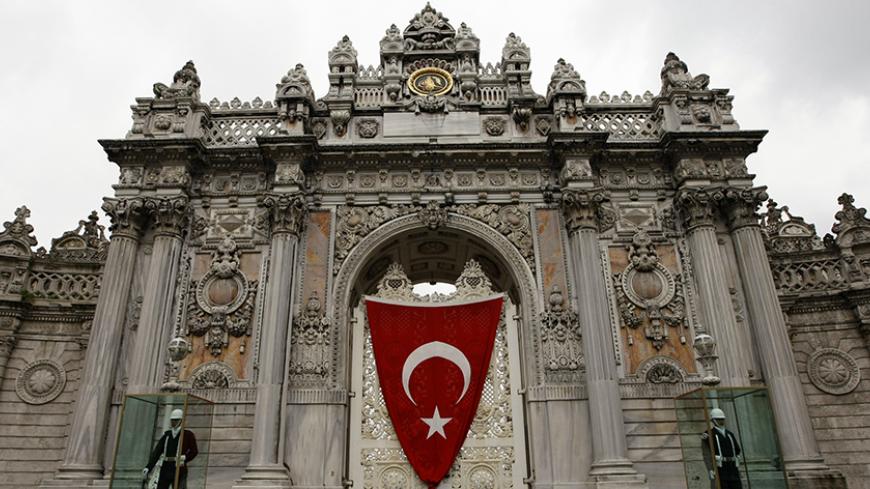 The Ottoman era Dolmabahce Palace is decorated with a huge Turkish flag as part of the National Sovereignty and Children's Day celebrations in Istanbul, Turkey, Apr. 23, 2009. - REUTERS/Murad Sezer

In Turkey, there has been an unmistakable revival of the image of Sultan Abdulhamid II. The powerful Ottoman monarch who ruled the empire single-handedly from 1876 to 1909 is praised with a flood of articles in the pro-government press, endless messages on social media and various conferences and panels. The speaker of the Turkish parliament, Ismail Kahraman, a confidant of President Recep Tayyip Erdogan, even hosted an “International Symposium on Sultan Abdulhamid II and His Era,” at the Dolmabahce Palace in Istanbul, a relic from the latter-day Ottoman Empire. The great sultan, Kahraman said, “is a mariner’s compass to give us direction and enlighten our future.”

On the one hand, there must be no big surprise in the love affair for Sultan Abdulhamid II by Turkey’s new ruling elite — the religious conservatives. For as the last great Ottoman sultan, as he has been dubbed, Abdulhamid II has been a cultural icon for decades for Turkey’s Islamic circles. Popular Islamist writers such as Necip Fazil Kisakurek praised him as “the exalted sultan,” for he was a pious Muslim, a caliph worthy of his name and the defender of Muslims. It became a legend that Abdulhamid II refused to sell Palestinian lands to the nascent Zionist movement despite the economic bankruptcy of his state. The great sultan, in fact, has been Turkey’s Islamist alternative to Ataturk as a source of historical inspiration.

However, the new pro-Abdulhamid II wave has an additional line, which actually seems to be its main point: Abdulhamid II was an authoritarian ruler, heavily opposed by most Ottoman intellectuals of his time. His career had actually begun by proclaiming the first Ottoman Constitution and assembling the first elected Ottoman parliament in 1876. However, in less than two years, in the midst of a disastrous war with Russia, Abdulhamid II suspended the constitution and closed the parliament for the next three decades. Ottoman liberals and even some Islamic figures, who saw constitutional rule as the only way to save the empire, turned against Abdulhamid’s authoritarianism, only to be silenced or exiled by him.

That authoritarian legacy of Abdulhamid II seems to be one of the key themes underlined by supporters of Erdogan. Erdogan, they say, is also authoritarian, but for all the right reasons: Turkey is facing lethal threats, and a strong leader must guide the nation without caring what his liberal or foreign critics say.

This historical analogy was first highlighted by Erdogan himself. “This newspaper had once called Ottoman Sultan Abdulhamid an 'absolute monarch,'” he said during a public rally in May 2015, condemning The New York Times after a critical editorial by the paper. “And today it directs to the Republic of Turkey and the hate that it once directed to the Ottoman state.”

Historian Ebubekir Sofuoglu soon expanded the argument by a much-publicized article comparing Erdogan and Abdulhamid II, warning that the latter’s fall was also the fall of the Ottoman Empire. The great sultan’s naive opponents believed that “liberty, equality and fraternity" would save the empire, the historian argued, but those foreign-induced ideas only expedited the downfall. Erdogan’s liberal critics, he said, are similarly serving Turkey’s enemies.

More recently, Derin Tarih (Deep History), a monthly magazine with a clear pro-government line, further advanced the argument with a cover story that featured images of Abdulhamid II and Erdogan side by side. Titled “Abdulhamid’s resistance, the resurrection of New Turkey,” the story argued that Erdogan was merely picking up the historical role of Abdulhamid II, only to face the same challenges. “Their foreign policy strategies, health and education services, their struggles with foreign powers and the schemes planned against them” were supposedly all similar.

Obviously all this narrative excites the pro-Erdogan base in Turkey, as one can easily see by the countless social media posts that praise Abdulhamid II along with “the chief,” the term his supporters use for Erdogan. On a sober analysis, however, it seems inaccurate and unimpressive.

For one thing, Abdulhamid II was the ruler of a crumbling empire, whereas Turkey is a stable nation-state whose borders — with the exception of Kurdish insurgency — are secure. These are very different contexts. Moreover, the society Abdulhamid II ruled was largely a peasant society, and the critical intellectuals were a tiny force. Today’s Turkey, however, is urbanized, modern and complex. Opposition to Erdogan, therefore, is not limited to a small circle of intelligentsia but wide masses of different persuasions and lifestyles. Importing Abdulhamid II’s century-old techniques — such as espionage and censorship — would not result in the same “success.”

In addition, Abdulhamid II was actually not the anti-Western idol that today’s Islamist rhetoric in Turkey romantically depicts. If the Ottoman Empire had a real archenemy during the sultan’s time — and even before and after him — it was Russia. With regard to Western powers, Abdulhamid II had always followed a pragmatic policy, focusing on building alliances with Great Britain and even the United States — as I once explained in an article about this “pro-American caliph.”

Abdulhamid II also had Western tastes such as the piano and opera. This, in fact, did come as a big surprise to some Turkish Islamists of today, as noted by a columnist in the pro-Erdogan daily Star. At the symposium on Abdulhamid II hosted by the speaker of the Turkish parliament, the columnist wrote, a scholar explained that Abdulhamid II loved Western music. In return, “some religious youngsters objected, saying 'but we knew him as religious.'”

This not only indicates that there is a very parochial, narrow-minded definition of “religiosity” among Turkey’s “religious youngsters.” It also indicates that history is more complex than today’s ideological imaginations. If the ruling Justice and Development Party is really a “conservative” party as it claims, it should honor history by discovering it, rather than sacrificing it to current political needs.