Binali Yildirim is the ideal prime minister to usher in one-man rule in Turkey. 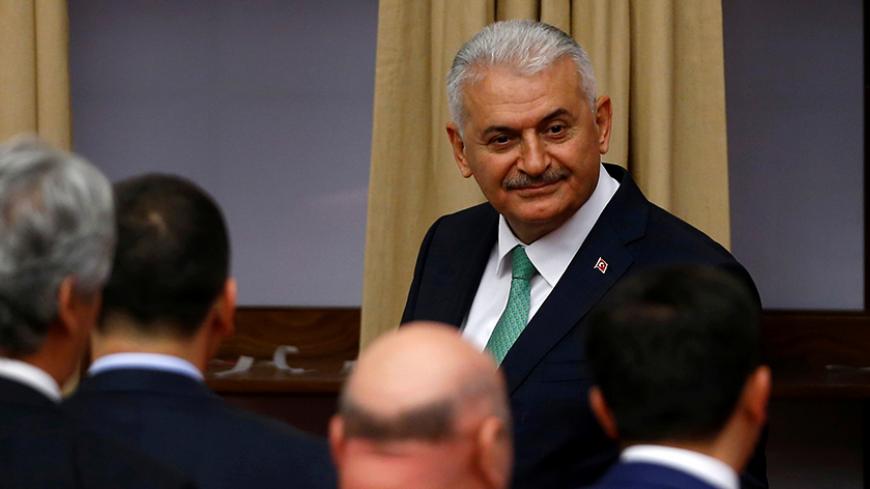 Binali Yildirim, the likely new leader of Turkey's ruling Justice and Development Party, attends a debate at the Turkish parliament in Ankara, May 20, 2016. - REUTERS/Umit Bektas

The political union of President Recep Tayyip Erdogan and departing Prime Minister Ahmet Davutoglu was a marriage of convenience. Davutoglu knew this when Erdogan handpicked him to succeed him as head of the Justice and Development Party (AKP) and thus the premiership of Turkey. The current outgoing prime minister had been brought to prominence thanks to former President Abdullah Gul, who became the first person Davutoglu disappointed. Accepting the nomination to be prime minister, Davutoglu expressed his gratitude to “party elders” but failed to mention Gul. He failed Gul's loyalty test, and then he failed Erdogan’s.

According to Erdem, the first stage began in 2011, when the ruling AKP took 50% of the vote for a stunning legislative victory; the second on August 10, 2014, the day Erdogan was elected with more than 50% of the vote in the first round of Turkey’s first popular elections for president; and the third on May 4, 2016, when Erdogan pushed Davutoglu aside as prime minister.

What the AKP’s core Islamist constituency actually has in mind, however, is the revival of Ottoman glory in the personage of Erdogan. They want an authoritarian ruler with strong Islamist credentials who is simultaneously a shrewd international political figure, like Sultan Abdulhamid II. Those familiar with the latter period of Ottoman power understand this. For Turkey’s Islamists, other than the founding sultans of the Ottoman Empire, the only other venerated figure is Abdulhamid, who reigned from 1876 to 1912, until being sacked in disgrace by the Young Turks, the forerunners of the Kemalists and today’s secularists.

History records Abdulhamid not only as a paranoid despot, but also as a great modernizer. Most pro-Western institutions associated with republican Turkey, from the high courts to technical high schools and many examples of urban modernization, owe much to Abdulhamid. In this respect, the newly anointed prime minister is the best choice to be grand vizier to the mighty sultan.

Unlike Davutoglu, the mind behind unrealistic theories that ended in foreign policy disasters for Erdogan, Yildirim is a successful technocrat, a doer who delivers tangibles without displaying an iota of ego. He is efficient but never tries to outshine his boss. He has been unflinchingly loyal to Erdogan for nearly a quarter of a century.

Davutoglu was pretending to be an Erdogan loyalist and didn’t do enough to distance himself from suspected malcontents secretly gathering under his umbrella, away from the “Chief.” Yildirim has no umbrella for them. Rather, he will serve as Erdogan's umbrella.

Erdogan took Davutoglu in the handover from Gul, but Yildirim was always his man. When Erdogan took control of the challenging post of elected mayor of Istanbul, Yildirim was in his small inner circle. Yildirim may have been the only technocrat among them whose primary educational background was in the imam-hatip religious schools, like Erdogan's.

Under Mayor Erdogan in the 1990s, Yildirim served as director general of the Istanbul Fast Ferries Company, a jewel in the crown among the numerous other successful operations overseen by the Istanbul Municipality during Erdogan’s administration. As a member of Erdogan’s inner circle, he emerged as a co-founder of the AKP in 2001 and became minister of transportation, maritime affairs and communication a year later. This is one of the principal areas in which Erdogan can claim good governance and service provision.

Although Yildirim was severely criticized because of a fatal derailment of a high-speed train, he deserves recognition as the mastermind behind the development of Turkey’s high-speed rail system. The construction of a network of highways is also one of the major achievements of Erdogan’s premiership, and as minister of transportation, Yildirim left his strong imprint on it. Yildirim always stood firm with his boss and kept a low profile.

Yildirim’s background and history of performance had made him the best candidate to succeed Erdogan when he was elected president in 2014, but that was the time of transition to one-man rule, not the advent, which has now arrived. Instead, Davutoglu was selected for the transition with Yildirim assigned duty as Erdogan’s watchdog over Davutoglu's government, somewhat reminiscent of former Soviet-era political commissars.

On May 19, an Israeli newspaper ran the headline, “Turkish technocrat tapped as new prime minister. AKP co-founder to run unopposed after Davutoglu quit; expected to promote Erdogan’s bid for more power.” The Wall Street Journal’s reporting opened, “Turkey’s ruling party tapped a stalwart ally of Recep Tayyip Erdogan to become its leader on Thursday, paving the way for a new prime minister who will champion the Turkish president’s priorities, including a constitutional overhaul that would give him more power.” No one was surprised.

Anyone who thought Berat Albayrak, the current energy minister and Erdogan son-in-law, to be picked for the post does not know how to read Turkey’s president. If what he has in mind is to establish his “republican” dynasty as an authoritarian president-sultan (or vice versa), he needs a prime minister-grand vizier (or vice versa) who, apart from his unwavering loyalty, is an extremely capable political and technical operative who can provide guidance in governance to the “sultan’s household.” Yildirim is therefore an ideal choice for the Prime Ministry during the ensuing period of Erdogan’s presidency.

That said, anyone who thinks Yildirim will be a low-profile prime minister is mistaken. He will not be. One should not forget that he is an expert operator, a doer and steadfast in his loyalty to Erdogan. International affairs and legislative changes in domestic politics that stand to alter Turkey is Erdogan’s domain and jurisdiction. Yildirim knows all of them and is supportive of them. Thus, he is the unrivaled and best choice for Erdogan.