How an Ottoman diplomat captured Levantine 'glitterati' in caricatures

An exhibition in the Turkish capital highlights an Ottoman bureaucrat's caricatures of the diplomatic set in the waning days of the empire. 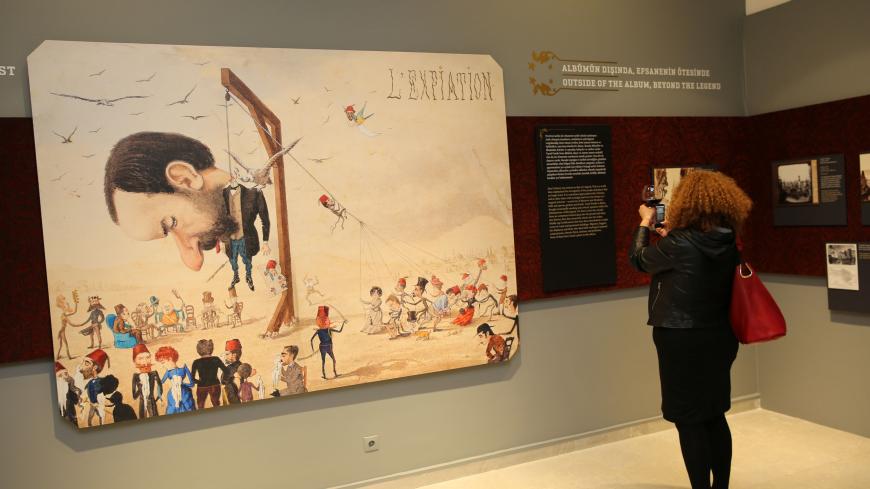 A visitor photographs one of the works on display at an exhibition of works by an Ottoman bureaucrat, Yusuf Franko, Ankara, Nov. 22, 2018. - ANAMED

A polyglot, multicultural and unobtrusive, Yusuf Franko was an ideal Ottoman bureaucrat on the slippery slope of the Sublime Port a hundred years ago. An Arabic-speaking Melkite Christian of Lebanese ancestry born and bred in the imperial capital, Franko would have remained a marginal figure in history had the curator and passionate collector Bahattin Oztuncay not come across an album full of his caricatures in 2016.

Franko had joined the Ottoman Ministry of Foreign Affairs in the second half of the 19th century, just like his three brothers. He never served abroad but was governor of Mount Lebanon for five years and held some other minor posts during an undistinguished career. He eventually became foreign minister for a few months in 1918, during the empire's twilight, before fading into oblivion.

The brownish leather notebook of Franko's caricatures reveal that the modest bureaucrat was in addition an accomplished caricaturist who expertly played, often in full color, on national stereotypes, physical peculiarities and personal idiosyncrasies. He primarily sketched colleagues and the beau monde of Istanbul's cosmopolitan Pera neighborhood, today's Beyoglu, which was at the time a little Paris, full of theaters and elegant open air cafes where French was spoken.

Franko's work was widely shared and appreciated in elite circles although never published. The undated album contains 124 caricatures pasted onto 86 pages with headings written in pencil. “Youssouf” adorns the cover, impressed in big, gold capital letters. The images in the album were drawn between 1884 and 1896. Oztuncay, who is also a consultant to the business mogul and art collector Omer Koc, told Al-Monitor the fascinating story of the album, which left Istanbul and then returned via the Nile, the United States, Toronto and Iceland.

While living in Iran, the American sculptor Herbert Brooks Walker had bought the book in the Grand Bazaar in 1957. He took it along on his various travels, until he and his wife returned to Vermont. Walker opened and directed an arts museum, but he never exhibited the works in the album.

At a Sotheby's auction in the 1990s, the album remained unsold. In 2016, it was offered for sale to the Aga Khan Museum in Toronto, where Oztuncay, preparing an exhibition there, came across it. He was enthralled.

In the album, Oztuncay saw “a colorful and poignant message of its time.” He added, “It's very representative of Istanbul's history.” After buying the album, Oztuncay presented it to Omer Koc, coincidentally on his birthday. “When we bought it, I immediately started planning an exhibition, as we do with the most interesting pieces we acquire,” Oztuncay told Al-Monitor.

“The Characters of Yusuf Franko: An Ottoman Bureaucrat's Caricatures,” along with an accompanying catalogue, was produced by a dedicated team of historians and other researchers, architects and designers selected and coordinated by Oztuncay. The exhibition opened at Istanbul’s Anamed Center, a venue in Beyoglu, and ran from January to July 2017. It then moved on to Ankara in December 2018, to the Zulfu Livaneli Cultural Center, where it will hang through January 25, sponsored by the Cankaya municipality and the European Union delegation to Turkey. There is a possibility that it will later travel to London.

Ankara is an apt choice for the exhibition, since Cankaya is the neighborhood where embassies were built after the Turkish capital was moved from Istanbul in 1930. Visitors are greeted by eye-catching, life-size caricatures on the exterior windows of the building, one of them being Franko himself. It is as if the characters are beaconing people from afar to come inside and visit them.

The exhibition, divided into eight sections, is organized chronologically and thematically, from a look at Franko's family roots to the Pera of his day, a multilingual and multiethnic microcosm inhabited by diplomats, aristocrats, bankers, actors and artists. The satirical drawings depicting the 19th-century diplomatic and society set come alive with texts and other documents providing context and explanations. For the exhibition in Ankara, the album itself could not be displayed, but the individual pages can be viewed using a digital device.

Mehmet Kentel, a historian and co-curator of the exhibition, explained that Franko's album “literally gives color” to the social scene of 19th-century Pera. “Further research can make good use of the fashion styles and interiors represented in the caricatures,” he told Al-Monitor.

Franko was an insider, and as a member of that privileged group had direct access to diplomatic society and its social events. His drawings are faithful, almost-photographic representations of what he saw and experienced.

Franko, probably self-trained as a caricaturist, was a versatile artist, skilled at using many different techniques. His specialty was “charged portraits,” in which personal attributes appear comically exaggerated, names are satirized, and people are transformed into animals, and so on.

In one example of the genre, the German General Ristow, nicknamed “Bira Pasha” — Pasha of Beer, due to his pot belly and weakness for the bottle — is depicted in two caricatures. In the first, he is bloated and red, and in the second, he appears “mort aux camps d'honneur” (killed in action), having drank too much.

In another example, Franko drew General Brockdorf sporting a peacock tail. Then there is Count Gallina depicted mounting a giant chicken — “gallina” is Italian for “chicken” — and with a coat of arms full of eggs and baby chicks. The body of the secretary of the British Embassy, Mr. Tower, is, indeed, a tall, thin tower topped with his face.

At least one of Franko's caricatures led to a fruitful, artistic exchange. He portrayed Roberto Preziosi, son of the famous Maltese painter Amedeo, as chasing women, and Roberto, an artist himself, drew Franko as a puppet master pulling the string of Pera society with his brushes and pens.

Franko died in 1933, but the last of his caricatures dates to 1896. The album had been assembled later in his life, the headings added as recollections. Why did Yusuf Franko stop drawing at some point?

A clue might be found in the image above. “L'Expiation” (Atonement) is a large representation of Franko on the gallows while below him many of his characters celebrate, or at the least express indifference, while other take their revenge by pulling the ropes for his execution. Franko may have been attacked by some offended colleagues and censored or quietly asked to show restraint. Indeed, in 1877 Sultan Abdulhamid II banned all caricatures.

With the journey of Yusuf Franko and his characters, one is left with the hope that another album, or at least a few errant caricatures, might still be hidden somewhere in the Grand Bazaar.