Archaeology's Trojan War: The artist who took on Schliemann

Osman Hamdi, a 19th-century Ottoman painter whose works sold at record prices earlier this year, also saved artifacts from being smuggled out of Turkey by foreign archaeologists. 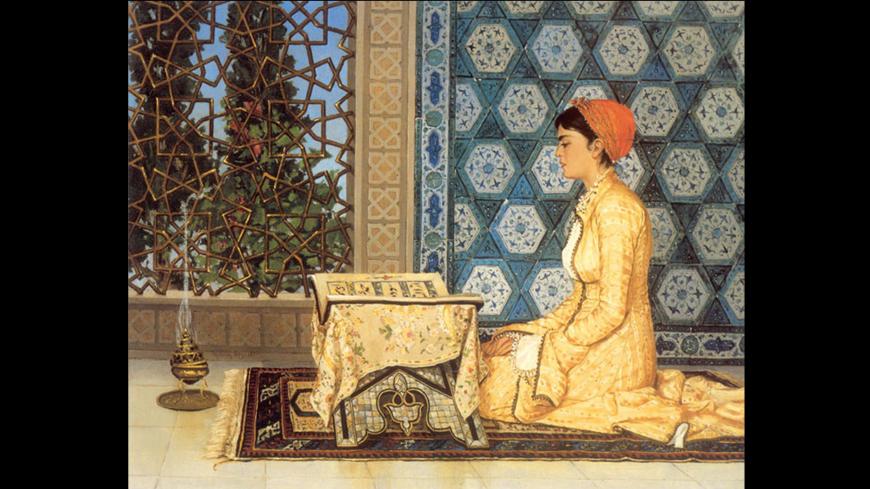 “Young Woman Reading,” painted by the Ottoman painter and archaeologist Osman Hamdi, was bought in October for the record price of $7.4 million by the Islamic Art Museum Malaysia and is currently on display at the British Museum. - Wikipedia

Armed with deep pockets for offering generous bribes and a network of European dignitaries that included German Chancellor Otto von Bismarck to pull some strings, Heinrich Schliemann had little to fear from the disintegrating Ottoman Empire as he went about raiding the treasures of Homeric Troy. Throughout the 1870s, the German archaeologist smuggled tons of artifacts and gold from Hisarlik, a site near the Dardanelles Straits, including a headdress allegedly worn by Helen of Troy and a lot that he erroneously insisted was the treasure trove of King Priam. Some of these artifacts can currently be viewed at the British Museum in the exhibition “Troy: Myth and Reality.”

A few corridors from the Troy exhibit, a large oil painting shows a young woman kneeling before a lectern holding a Quran and a backdrop of elaborately painted turquoise tiles and latticework. “Young Woman Reading,” which recently sold for more than $7 million, was painted by Schliemann's nemesis, the artist-cum-bureaucrat Osman Hamdi, who prevented the daring German from smuggling even more antiquities from Ottoman territory.

Osman Hamdi, born into a family of high-ranking bureaucrats and landowners, was sent to Paris by his father in 1860 to study law, but while there abandoned his studies to work in the studios of the Orientalist painters Jean-Leon Gerome and Jerome Boulanger, first as a model and then as a painter himself. When Osman Hamdi returned to Istanbul in 1869, after his fancy-free years in Paris, he pursued a career in diplomacy, serving as a clerk in the Foreign Ministry. In 1881, Sultan Abdulhamid II appointed him director of the Imperial Museum. A soft-spoken but determined bureaucrat, Osman Hamdi got the tight-fisted sultan to pay for an extension and renovation of the museum, laying the groundwork for what is today the Istanbul Archaeological Museums.

“The relationship between the modernist intellectual and the autocratic ruler was far from an easy one, but they needed each other," Emre Caner, who wrote "The Tortoise Trainer," the biography of Osman Hamdi, told Al-Monitor. "Osman Hamdi was probably one of the longest-serving bureaucrats under Abdulhamid.” Caner might as well have said that he was one of the few who was able to keep his head on his shoulders.

In 1884, Osman Hamdi persuaded the sultan to strengthen the empire’s rather lax Antiquities Law. European archaeologists had been boldly digging around the empire for decades, and the amendments put them on a short leash with close monitoring and large penalties for removing antiquities from the country.

"Osman Hamdi Bey was a visionary who understood that the empire needed to have its own archaeologists to carry out excavations on its territory, not just authorize and depend on foreign missions," Jean-Luc Maeso, director and curator of Izmir's Arkas Art Center, explained to Al-Monitor.

When Schliemann's team arrived at the Hisarlik site in the mid-1880s, they were amazed to find a Turkish official shadowing their every move and reporting directly to Osman Hamdi, according to "The Tortoise Trainer." After a few months, the director himself visited the excavation, ostensibly to “sketch” the area, but doubtlessly also to keep an eye on what was being excavated.

“A snapshot taken in 1890 shows Osman Hamdi with Schliemann and other archaeologists in Troy,” Caner said. “It is a telling photo that demonstrates that the Ottoman Empire is now ‘​in the picture’ when it comes to archaeology. It is there, it is involved, the excavations are no longer the turf of the foreign missions.”

Osman Hamdi owed his prominence in the 19th century to his contributions to archaeology and museology. A hundred years later, he would become known as the Ottoman painter who produced the most expensive works. A combination of Oriental motifs and Western romanticism distinguish his paintings, which feature portrayals of people engaged in mundane daily tasks, such as working, relaxing and reading. He paid painstaking attention to detail in clothing, fabrics, and backdrops and other settings. He inserted himself in a number of his paintings, appearing as a stooped, bearded figure dressed as a teacher, tradesman or scribe. Osman Hamdi almost always teased the imagination with the titles of his work, such as “Fountain of Youth” or “Creation,” hinting at a deeper symbolism, dichotomy or existential issues behind the image presented in the painting.

“Osman Hamdi, of course, was different from the Orientalists, most of whom drew a romanticized picture of the East, a picture that did not exist except in their dreams,” said Maeso, who curated “Anatolian Travels,” an anti-Orientalist exhibition at the Arkas Art Center in 2016. “He was a portraitist, a painter of intimate scenes that the Western Orientalists could not have seen and did not even imagine.”

In October, three of Osman Hamdi's oils sold at high prices in three different auctions. “Lady from Istanbul” (1881), sold by the Dorotheum Gallery in Vienna, went for $1.7 million to an undisclosed buyer, and on the same day, Sotheby’s in London auctioned “Quranic Instructions” (1890), which depicts two men - one of them Osman Hamdi himself- in a corner of the Green Mosque, selling it for $6 million.

The record price for an Osman Hamdi belongs to “Young Woman Reading,” which was bought by the Islamic Arts Museum Malaysia for $7.4 million at a Bonham’s auction in London on Oct. 26. The painting is currently on view at the British Museum as part of the exhibition “Inspired by the East: How the Islamic World Influenced Western Art.” It will remain there until January 26 and after that be shipped to Malaysia.

Osman Hamdi often used women as subjects in his work, including in a lost painting that remains his most controversial to this day. “Creation” (1901) — better known by its French title, “La Genese,” or its popular Turkish name, “Mihrab” — depicts a pregnant woman, in a bright yellow decollete robe, sitting on a chair with books, allegedly the holy books of various religions, at and under her feet. A superbly detailed mihrab, the semicircular niche in a mosque that indicates the direction of Mecca, serves as an ornate backdrop.

The religious setting, the woman’s dignified posture, slightly protruding belly and uncovered head, and the portrait's mysterious disappearance from a bank's collection have given rise to academic papers and a Dan Brown-style thriller by Arif Ergin in which the 2018 economic crisis in Turkey is spurred by an all-powerful global cabal set on recovering sketches by Osman Hamdi so it can decipher an important message in them.

Edhem Eldem, a historian and a relative of Osman Hamdi, said the painting was inspired by Gerome's sculpture “Tanagra” (1890), a work about which Gerome and Osman Hamdi communicated. Others argue that it is a tribute to female fertility or an allegory for Osman Hamdi's firm belief in the power of science and nature over religion.

“The works of Osman Hamdi Bey have received a great deal of interest and led to a wide range of interpretations ever since Istanbul's two top private museums, the Pera and Istanbul Modern, competed to acquire ‘The Tortoise Trainer,’” Caner said. This work — depicting the slim figure of Osman Hamdi as a man faced with the impossible task of making tortoises walk a straight line for the pleasure of the sultan and his hedonistic court — broke the record in 2014 for the most expensive painting sold by a Turkish artist until then, going to the Pera for $3.5 million. Like “La Genese,” “The Tortoise Trainer” spawned dueling interpretations about its symbolic meaning, the most prevalent suggesting the ineffective reforms of the Ottoman Empire in the 19th century. 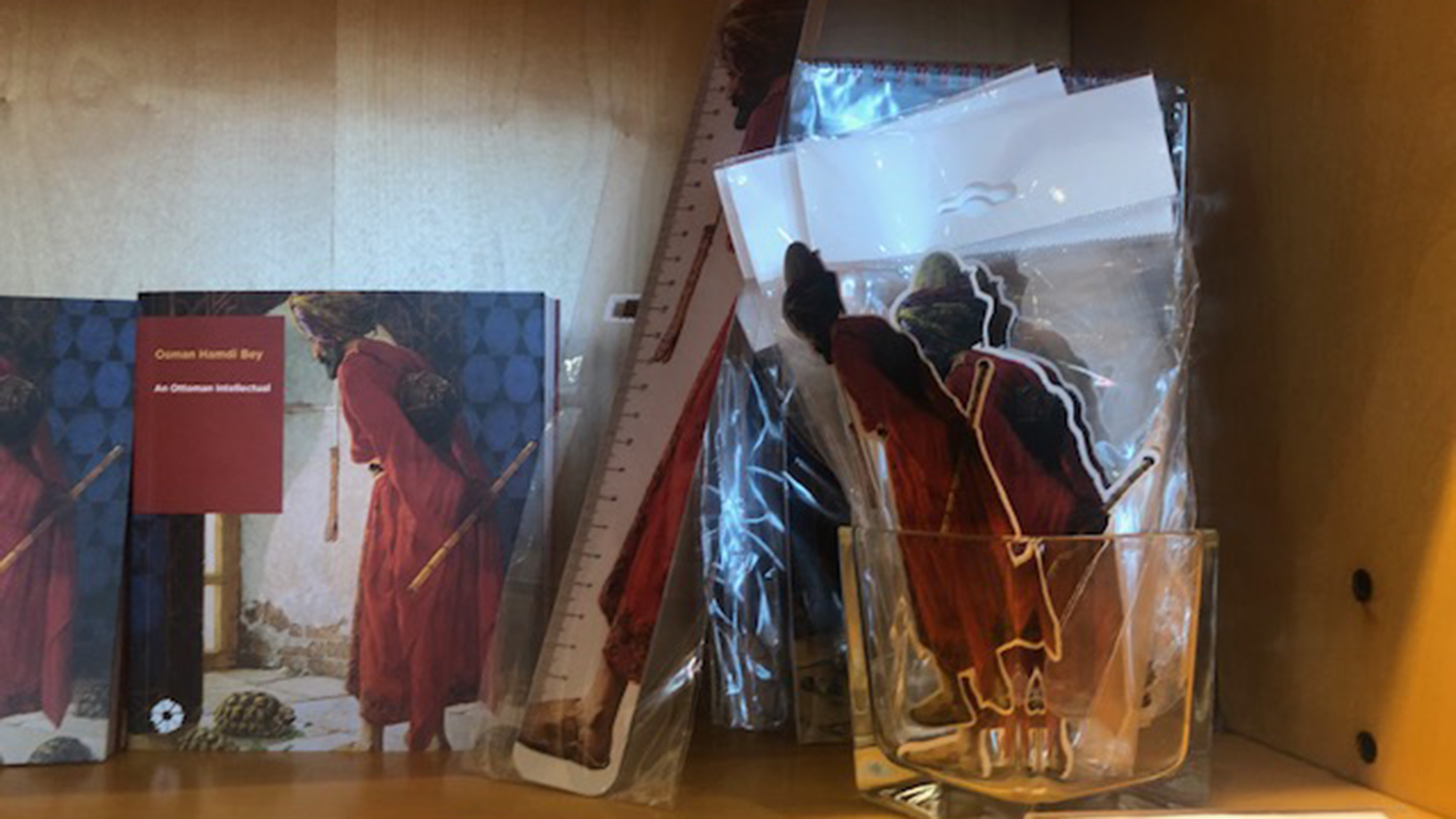 “Besides the symbolism, it is a technically strong painting, with bright colors and familiar objects — such as the tortoise or the musical instrument, the ney — that the public loves,” Kultigin Akbulut, culture writer for Duvar, told Al-Monitor.

Today, the hunched figure of the tortoise trainer in Sufi dervish clothing clutching a ney behind his back can be seen on everything, from jewel boxes to rulers to playing cards. Copies of the painting in gold frames decorate rooms in chic cafes and restaurants and even the offices of high-level bureaucrats in Turkey. It may well be that modernist Turkish intellectuals, as well as some civil servants in the 21st century, feel just as frustrated as a tortoise trainer during the Ottoman Empire.