Parts of the platform approved at the Democratic National Convention this week have been both praised and criticized by Israel- and Iran-focused groups in Washington. 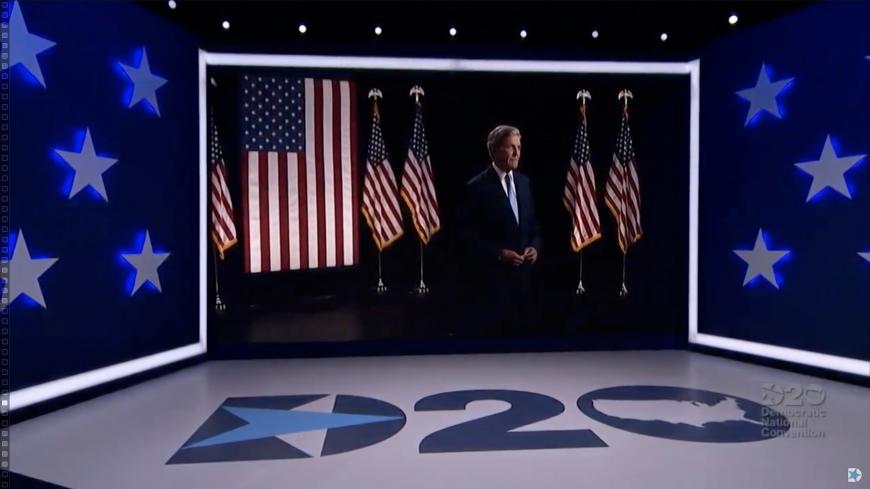 The Democratic Party's new platform approved at the Democratic National Convention this week shows the party’s evolution on Syria and the US-Saudi relationship, but may disappoint some progressives on Israeli-Palestinian issues.

The party approved the new platform Tuesday. The convention wraps up tonight with a speech from presidential nominee and former Vice President Joe Biden.

The new platform differs from the 2016 one on a few issues involving the Middle East. At the 2016 convention, the Democrats explicitly called for Syrian President Bashar al-Assad to be removed from power, endorsing a “negotiated political transition that ends Assad’s rule.” This year, the Democrats do not mention Assad, and simply call for a “political resolution for this horrific war.”

Four years ago, Syrian rebel forces still controlled parts of the largest city, Aleppo, and other areas of the country. The tide has turned in favor of Assad since the Russian intervention in 2015, however, and he now controls most of Syria. Rebels are now relegated to the northwestern province of Idlib and areas along the Turkish border that are de facto run by Turkey.

The Democratic Party has also shifted on relations with Saudi Arabia as it relates to the war in Yemen. A Saudi-led coalition backs the Yemeni government against Houthi forces supported by Iran. The Trump administration is a steadfast ally of the oil-rich Gulf kingdom that has also grown closer to Israel due to shared concerns on Iran.

In 2016, the platform did not mention Saudi Arabia. This year, it says, “Democrats will end support for the Saudi-led war in Yemen.”

The Democrats call for good relations with the Gulf, but take aim at the Trump administration’s policies toward the region.

“We have no interest in continuing the blank-check era of the Trump Administration, or indulging authoritarian impulses, internal rivalries, catastrophic proxy wars, or efforts to roll back political openings across the region,” reads the platform.

This section is not specific to any country, but could refer to US support for Saudi Arabia, which has a poor human rights record. The “catastrophic proxy wars” may refer to Yemen.

The platform is supportive of Israel, similarly as it was in 2016, despite a rising number of progressive Democrats in Congress who criticize Israel and support the Palestinians. The new platform references “our commitment to Israel’s security, its qualitative military edge, its right to defend itself.” It also calls for “the right of Palestinians to live in freedom and security in a viable state of their own.”

On the other hand, the platform clearly states its opposition to Israeli efforts to unilaterally annex parts of the Palestinian West Bank.

“Democrats oppose any unilateral steps by either side — including annexation — that undermine prospects for two states,” the platform reads.

Unsurprisingly, the platform endorses returning to the 2015 Iran nuclear deal. This Obama administration era agreement compelled Iran to comply with stipulations on its nuclear program in return for the lifting of sanctions. US President Donald Trump withdrew the United States from the deal in 2018 and is now working to further sanction the Islamic Republic.

The platform also calls for a continued military presence in Iraq to help fight the Islamic State (IS) and continued support for Kurdish-led forces in Syria also battling IS.

Some Middle Eastern-focused groups in Washington are supportive of the new platform. J Street, which describes itself as both “pro-Israel” and “pro-peace,” said the platform made “progress” from 2016 and praised its opposition to West Bank annexation.

“The platform approved this week includes clear support for the rights of both Israelis and Palestinians,” a J Street spokesperson told Al-Monitor. "For the first time ever, it states explicit opposition to Israeli settlement expansion and unilateral annexation.”

J Street also praised the platform’s support for a return to the Iran deal, but said the language on the West Bank, which most countries consider a Palestinian territory occupied by Israel, could be improved.

"There are areas where more progress is needed — like occupation, which goes unmentioned in the platform,” said the J Street spokesperson. “We continue to believe the Democratic party should acknowledge and oppose ongoing occupation, a systemic injustice at the heart of the Israeli-Palestinian conflict."

Eric Mandel, the director of the Middle East Political and Information Network research organization, said the platform is a disappointment to the Democratic Party’s more pro-Palestinian wing.

“The Democratic Party platform certainly is not as anti-Israel as the growing progressive wing of the party would like,” Mandel, also a senior editor at The Jerusalem Report, told Al-Monitor.

Mandel criticized the platform’s support for the Iran nuclear deal, saying it “totally undermined not only Israeli and allied interests, but undermines American national security interests.”

He said progressive Democrats will gain more power on Middle Eastern issues in the coming years. “Platforms don’t necessarily mean very much, but what means much more is that the ascendancy of the growing progressive wing of the party will be replacing the staunch, older, pro-Israel liberal Democrats over the next decade,” he said.

The Zionist Organization of America, a staunchly pro-Israel group, said the platform is not sufficiently supportive of Israel on several points. This includes annexation, which the organization supports. "Some 500,000 Jews live in Judea and Samaria and need the security of stability of Israeli sovereignty," a spokesperson told Al-Monitor, referring to the West Bank by an alternative Jewish name.

Some Iran-focused groups have voiced support for the platform. The National Iranian American Council works to highlight voices in the Iranian-American community and applauded the content of the platform on Iran. The group’s policy director said he wants to see the platform’s calls for diplomacy and an end to Trump’s “maximum pressure” strategy put into action.

“It will be important that they work to implement the vision in the platform, make a firm break from the failed ‘maximum pressure’ approach and support a Biden administration returning to the deal and building on it through renewed diplomacy,” Ryan Costello told Al-Monitor.

Both Iran and Israel have come up at this year's convention. Former Secretary of State John Kerry praised the Iran deal in his prime-time speech Tuesday. The appearance by pro-Palestine activist Linda Sarsour at the convention's virtual Muslim Delegates and Allies Assembly the same day also angered some Trump supporters; Biden also disavowed her views.