The UN special rapporteur on extrajudicial executions called the US strike an “arbitrary killing” that threatens to undermine norms of military conflict between countries. 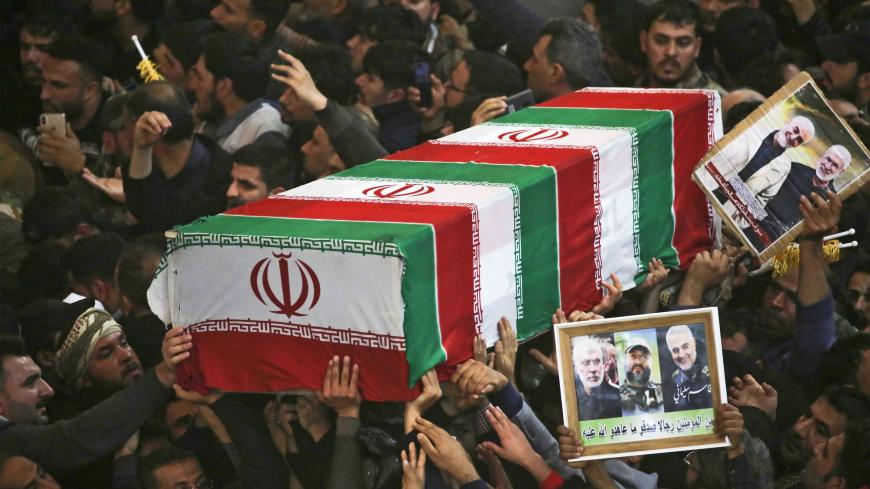 Mourners carry the coffins of slain Iraqi paramilitary chief Abu Mahdi al-Muhandis, Iranian military commander Qasem Soleimani and eight others inside the Shrine of Imam Hussein in the holy Iraqi city of Karbala during a funeral procession on Jan. 4, 2020. - MOHAMMED SAWAF/AFP via Getty Images

A top UN expert said the United States' assassination of top Iranian commander Qasem Soleimani violated the UN Charter and was not permitted by international law, according to a report released yesterday.

US President Donald Trump ordered the US military to kill Soleimani after reportedly being presented late last year with alternative options to respond to continuing provocations by Iran’s regional proxies in the region.

The strike killed Soleimani and one of his Iraqi proteges, Abu Mahdi al-Muhandis, as well as eight others outside Baghdad International Airport in January.

In a report released Monday, Agnes Callamard, the UN special rapporteur on extrajudicial executions, called the US strike an “arbitrary killing” that threatens to undermine norms of military conflict between countries.

“Even at the most basic level, the US did not demonstrate that striking Soleimani was ‘necessary,’” the report read.

The report said American officials’ statements appeared to show the Trump administration killed Soleimani in order to deter Iran from carrying out possible future attacks, or did so in retaliation for past attacks, both in breach of international norms.

“Under the UN Charter, armed attacks for purposes of retaliation are never permissible,” the report read.

The assassination of Soleimani, head of the Quds Force of Iran’s Islamic Revolutionary Guard Corps, marked a “watershed change” in targeted killings that could lead other governments to take similar action, according to the rapporteur.

The killing came months after the Trump administration designated the Quds Force a foreign terrorist organization, a move the UN report called “unusual.”

“It is hard to imagine that a similar strike against a Western military leader would not be considered as an act of war,” the report read.

The report also said the United States violated Iraq’s sovereignty by carrying out the attack without Baghdad’s permission and that Iran was not justified in retaliating by launching ballistic missiles at Iraqi airbases where US forces were present.

Rockets believed to be launched by Iran-linked militias continue to target US positions in Iraq, although the top US military commander for forces in the Middle East has said Soleimani’s killing has restored deterrence against Iran following attacks on international shipping and Saudi Arabian infrastructure last year.

The United States has been pushing the UN Security Council to renew an international arms embargo on Iran that is set to expire in October. Russia and China have expressed opposition to US threats to unilaterally trigger a return of international sanctions on Tehran if the vote fails.

The United Kingdom, France and Germany have said they will not support a US effort to reactivate the sanctions. Iran’s President Hassan Rouhani warned of a “firm response” if the United States deals a further blow to the 2015 nuclear deal.

The Trump administration unilaterally withdrew from the nuclear deal with Iran in 2018 and began what it calls a “maximum pressure” campaign built around crippling economic sanctions to bring Iranian officials to the negotiating table.

The United States accuses Iran of exploiting the 2015 deal to take advantage of regional conflicts to arm militias in Syria, Yemen and Iraq, thus posing a threat to US allies.