The top commander of US military forces in the Middle East says he believes the assassination of Iranian Maj. Gen. Qasem Soleimani has only temporarily deterred Iran from pursuing its goal of pushing US troops out of the region. 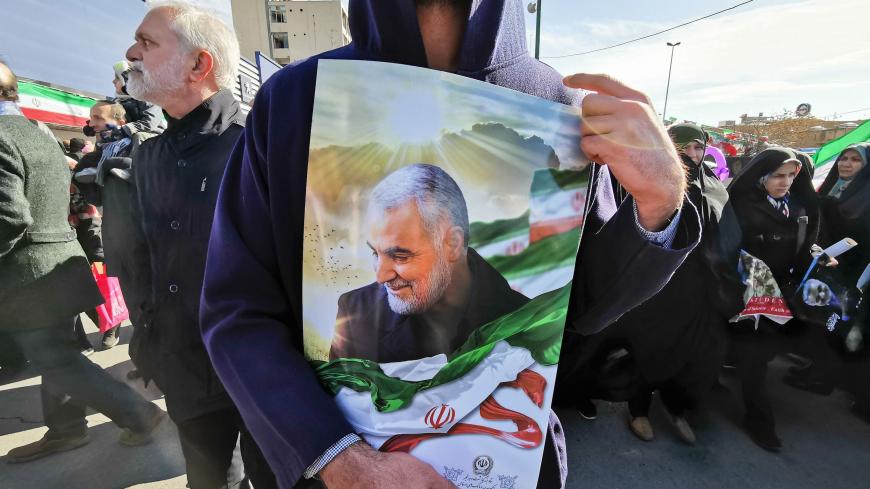 A Iranian man carries a portrait of slain Iranian Maj. Gen. Qasem Soleimani during commemorations marking the 41st anniversary of the Islamic Revolution, in the capital, Tehran, on Feb. 11, 2020. The United States killed Soleimani in a drone strike on Jan. 3. - ATTA KENARE/AFP via Getty Images

The top commander of US military forces in the Middle East says he believes the assassination of Iranian Maj. Gen. Qasem Soleimani has only temporarily deterred Iran from pursuing its goal of pushing US troops out of the region.

“I draw no confidence from periods of quiet,” the head of the US Central Command, Gen. Frank McKenzie, said in an interview with Bloomberg published today. “That's when I actually begin to look very hard at what the Iranians might be up to because I think they have long-term goals to eject us,” he said.

Why it matters: The US military carried out an order by President Donald Trump to kill Soleimani after suspected Iran-linked militias in Iraq killed an American contractor in a rocket barrage. The continuing rocket attacks followed sabotage of oil tankers in the Gulf of Oman and cruise missile and drone strikes on two of Saudi Arabia’s largest oil processing facilities on Sept. 14. The United Nations has said projectiles recovered at the site were of Iranian origin.

McKenzie has said the killing of Soleimani has restored a “rough deterrence” against Iran ­— that is, Washington believes Tehran is unlikely to risk another significant attack on US forces or allies for now, but that Iran’s proxy forces in the region are harder to control.

“I remember well the lesson of last fall where we were in a relative period of quiet and, bang, they attacked Aramco,” McKenzie told Bloomberg.

What’s next: Nobody knows. Iran may be waiting out the November presidential elections in the United States or biding time ahead of a vote scheduled for October at the United Nations over renewing an international arms embargo on Iran. The United States is pushing for the embargo to be renewed, while Russia and China have objected to US efforts.

Germany, France and the United Kingdom have said they will not support the Trump administration’s effort if it goes through with its threat to “snap back” international sanctions on Tehran should the embargo vote fail. The United States' European allies have warned that reactivating the sanctions risks collapsing what remains of the 2015 nuclear deal. Iranian President Hassan Rouhani has threatened a “firm response” should US actions further damage the deal.

The UN has said that Iran has also violated the deal in response to the US withdrawal.

Know more: A top United Nations expert has called the US killing of Soleimani “unlawful” and said it violated the UN charter. The Trump administration insists it killed Soleimani based on knowledge that Iran’s Islamic Revolutionary Guard Corps was planning imminent attacks on US personnel and allies, but has yet to provide any evidence.