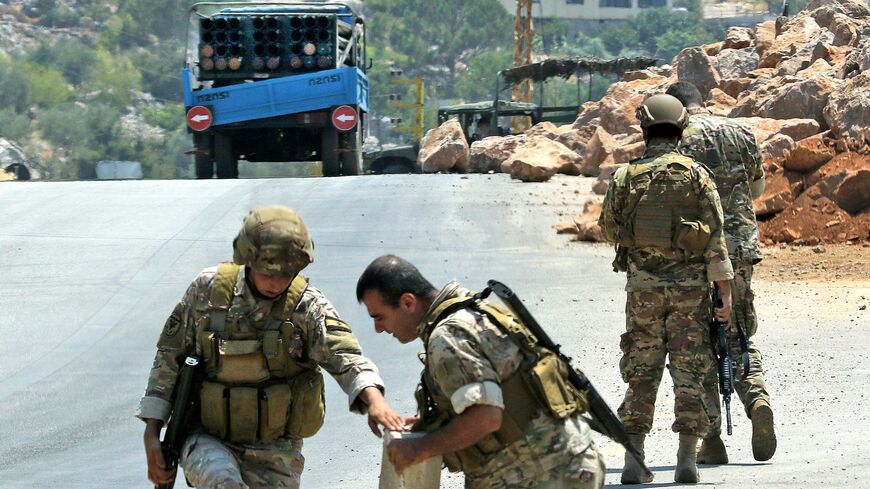 Lebanese soldiers stand near a truck carrying a multiple rocket launcher after confiscating it, in the southern village of Shouayya, on Aug. 6, 2021. Lebanon's Hezbollah fired more than 10 rockets into Israel, prompting retaliatory shelling, in a major escalation between the Iran-backed Shiite movement and the Jewish state. Villagers from a Druze town in the south Lebanon district of Hasbaya stopped a truck carrying a multiple rocket launcher used in the attack, a military source told AFP, adding the army had confiscated the launcher. - MAHMOUD ZAYYAT/AFP via Getty Images

The US State Department issued a notice Monday of new sanctions against major Iran-backed militias in Syria and Iraq for violations of a US law that restricts weapons transfers involving Iran, Syria and North Korea.

The State Department said the organizations were sanctioned July 29 under the Iran, North Korea and Syria Nonproliferation Act.

The law was introduced in 2000 to allow Washington to single out individuals and organizations that transfer internationally controlled weapons to or from Iran. The legislation was later updated to include Syria and North Korea.

The sanctions follow a series of drone attacks on sensitive US military and intelligence sites in Iraq in recent months. The attacks have reportedly alarmed US officials.

In the wake of the chaotic multinational war against the Islamic State, Kataib Hezbollah, Asaib Ahl al-Haq and Lebanese Hezbollah have developed into arms of the IRGC’s reach into war-ravaged Iraq and Syria.

Their rise to prominence has raised concerns in the United States, Israel and the Gulf that Iran’s ballistic, drone and cruise missile technology could further proliferate toward the borders of Tehran’s rivals in the region.

In Iraq, a series of sporadic rocket barrages have raised the stakes for the remaining 2,500 US troops in the country. The harassment, believed to be carried out by Iran-linked militias, has killed two US personnel this year and injured several others.

Iranian-designed ballistic missiles, drones and cruise missiles have also repeatedly targeted Saudi Arabia, while Iranian drones and naval mines have struck Israeli-linked vessels in the Gulf region, the United States and Israel have said. Iran has denied responsibility for the attacks.

Israel has conducted hundreds of airstrikes against suspected Iran-linked targets in Syria with US intelligence support in recent years. The strikes are largely aimed at stopping precision-guided missile kits and other Iranian technology from approaching Israeli borders, US officials have said.

Israel has also sabotaged a number of Iranian cargo ships in the region, many of which were set to deliver petroleum to Syria’s regime in violation of US and international sanctions.

It was not immediately clear why the Russian firms were targeted under the law.

Representatives of the State Department’s nonproliferation bureau were not immediately available Monday to return Al-Monitor’s request for comment.

The sanctions come as Biden administration officials are seeking to resume the next round of indirect negotiations with Iran in Vienna over its rapidly accelerating nuclear program.

The current US administration is seeking to return to an updated version of a 2015 international agreement with Iran known as the Joint Comprehensive Plan of Action, or JCPOA, which limited Tehran’s nuclear capabilities in exchange for sanctions relief.

The Trump administration unilaterally abandoned the deal in 2018 with the support of the governments of Israel and Saudi Arabia as Iran-backed militias and projectiles proliferated across the Middle East.

The original 2015 agreement did not include limits on Tehran’s conventional ballistic weapons or drone programs.

The sanctions imposed on Iran by the Trump administration did not deter Tehran’s ambitions in the region, US intelligence assessments have concluded.