Intel: Turkey lashes out at new US support for Cyprus

Turkey is lashing out at the United States as Washington moves closer to providing Cyprus with military aid as the disputed island nation develops closer energy ties with Israel. 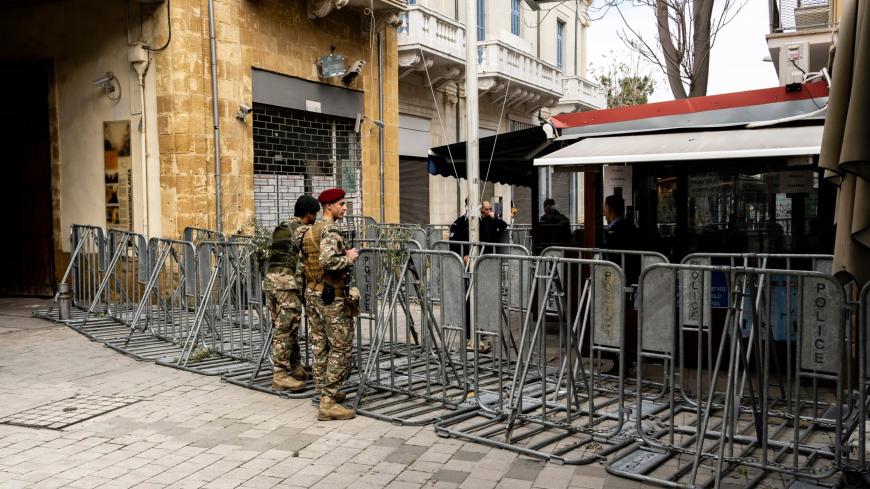 Cypriot soldiers stand guard at the closed Ledra crossing checkpoint in the old city of the Cypriot capital, Nicosia, on March 16, 2020. - Photo by IAKOVOS HATZISTAVROU/AFP via Getty Images

Turkey is lashing out at the United States as Washington moves closer to providing Cyprus with military aid as the disputed island nation develops closer energy ties with Israel.

The Turkish reaction came after the US Embassy in Cyprus said Wednesday that the United States planned to provide international military education and training to the Republic of Cyprus "beginning in U.S. fiscal year 2021, subject to Congressional appropriations and notification."

Turkish Foreign Ministry spokesman Hami Aksoy said in a statement, “This and similar steps do not contribute to the efforts towards the settlement of the Cyprus issue but on the contrary, lead to strengthening the intransigent attitude of the Greek Cypriot side. It is obvious that steps disregarding the balance between the two sides will not help create an atmosphere of trust on the island and ensure peace and stability in the Eastern Mediterranean.”

Why it matters: Turkey failed to dissuade Congress from allocating nearly $1.5 million in international military education and training assistance for Cyprus between 2020 and 2022 as part of last year’s spending bill. That legislation could also lift the decadeslong arms embargo on Cyprus. Secretary of State Mike Pompeo is evaluating whether to lift the Cyprus arms embargo, a provision that Christians United for Israel lobbied for amid converging Israeli-Cypriot energy interests.

Turkey relies on its occupation of Northern Cyprus to bolster its claims to offshore oil and gas reserves in the eastern Mediterranean. Ankara has become increasingly aggressive in blocking Cypriot ships from drilling in recent years, and Cyprus has signed contracts with several foreign companies to explore for oil in its disputed waters, including US-based Exxon Mobil, Israel’s Delek Qatar Petroleum, Italy’s ENI and France’s Total.

What’s next: The 2021 House foreign aid spending bill, which the Appropriations Committee advanced 29-21 today, would allocate $2 million to establish a joint dialogue between Cyprus, Israel and Greece to “support energy independence and security” and “defend against external malign influences in the eastern Mediterranean and the broader Middle East.”

However, the report accompanying the bill also notes that funds for Cyprus “should only be used for measures aimed at reunification and designed to reduce tensions and promote peace and cooperation between the two communities in Cyprus.”