Hagia Sophia is open for prayers, but not to Kurds

The Turkish government has deliberately excluded the pro-Kurdish Peoples’ Democratic Party from political and symbolic events ever since July 2015. This has not destroyed Turkey’s third-largest party, but it has contributed to the rise of Kurdophobia. 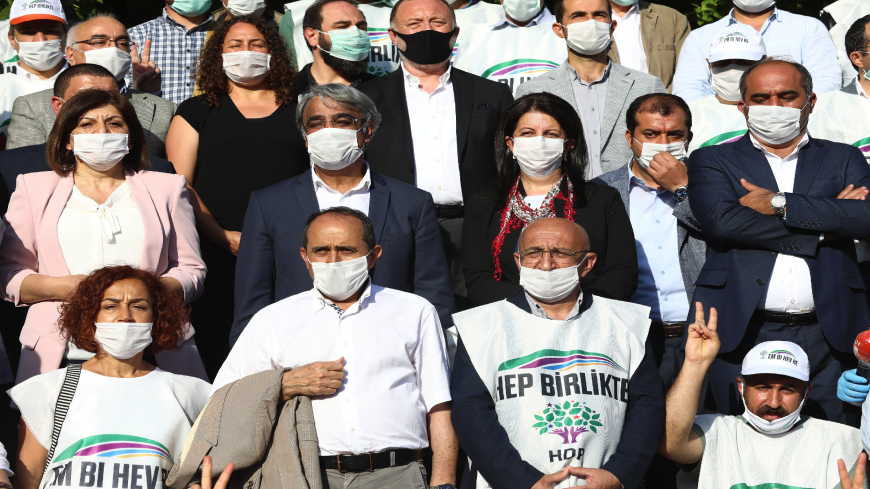 Co-chairs of the pro-Kurdish Peoples Democratic Party (HDP) Mithat Sancar (2nd L) and Pervin Buldan (3rd R) pose for a group photograph at Parliament Park following the "March for Democracy," which started in Edirne and Hakkari on June 15 and ended with a press release at Parliament Park in Ankara on June 20, 2020. Turkey's pro-Kurdish party vowed further protests during a rally in Ankara on the last day of its "March for Democracy," organized by the HDP, after two of its MPs and a deputy from the secular Republican People's Party (CHP) were barred from parliament on June 4. - ADEM ALTAN/AFP via Getty Images

The Hagia Sophia transitioned on July 24 to a mosque with Friday prayers and sermons. The prayer was “invitation only.” The discretion to invite was given exclusively to the Turkish Religious Affairs Directorate (the Diyanet). The Diyanet decided to omit the pro-Kurdish Peoples' Democratic Party (HDP). “This discrimination is against the constitution,” protested HDP members. Their pleas were ignored.

Indeed, this sort of discrimination “has become the norm since June 7, 2015,” when the peace process collapsed, said HDP parliament member Mahmut Togrul. The HDP has been excluded from almost all national gatherings, even to the post-July 15 National Unity Day events at Yenikapi Square in Istanbul. HDP members have little to no media presence and are not even allowed to participate in TV discussions about the HDP.

Togrul told Al-Monitor, “The [Justice and Development Party (AKP)] and its coalition partner act as if the HDP was not a legal party that was sanctioned by the courts of this country and met all proper requirements officially. We are being treated as an enemy, criminalized, arrested, removed from our democratically elected positions.” Togrul explained how HDP members are interrogated with mind-boggling questions. “Our mayors were asked, ‘You were seen entering the mayor’s office. Why?’ Police officers yell, ‘You are not my parliamentarian’ or ‘Get out of the parliament, go to the mountains and fight us.’ How can we expect the people who have voted for us not to lose their trust in the system?”

Turkish President Recep Tayyip Erdogan was rather upset as the HDP passed the 10% national vote threshold and gained seats in parliament in 2015 and then again in 2018. He labeled the HDP “the party under the control of a terror organization” and criticized those who dared to talk to the HDP.

Aykan Erdemir, senior director of the Turkey Program at the Foundation for Defense of Democracies in Washington and a former member of the Turkish parliament, told Al-Monitor, “This [deliberate exclusion] sends a clear message to Turkey’s Kurdish electorate that they are not welcome to partake in politics unless they bow down to the Erdogan government and its discriminatory policies. The Turkish government’s systematic exclusion of Kurdish citizens is an ill-advised move that pushes Kurdish youth to political violence as the only available domain to express their discontent.”

This is indeed a taboo that most pundits dare not touch in Turkey. However, we must ask what the potential consequences are if a party assumed to have a paramilitary wing is pushed out of the political scene.

There are three main consequences of excluding the HDP from the political domain. First, the HDP did not lose its voters. Second, the AKP’s divide and conquer policies against the opposition backfired, as the opposition realized they are just like the HDP in the eyes of the government and they need the HDP. Third and most detrimental is what failed at the political party level seems to have worked for the public as anti-Kurdish sentiment has increased over time.

Yektan Turkyilmaz, a research fellow at the Forum Transregionale Studien in Berlin, told Al-Monitor, “By omitting the HDP from all platforms, the AKP hoped the HDP electorate would forget about the party. Rather, they increased the dependency of the CHP (the main opposition Republican People’s Party) on the HDP. The opposition parties no longer can say it only happens to the HDP because they know they are next. Today, political parties are even talking about what happens if elections are eliminated altogether,” Turkyilmaz said.

He explained that the HDP comes from the decadeslong Kurdish movement; that is where its roots are. But its branches spread to several grievances of people in Turkey — grievances concerning women’s rights, the environment, workers' rights and religious minorities. “The HDP has proven to serve and stand up for the interests of all these disadvantaged groups. The HDP has not wavered from its efforts to demonstrate the damage government's policies caused to the whole country, not just to the Kurdish regions,” Turkyilmaz said.

Murat Somer, professor of political science and international relations at Koc University in Istanbul, told Al-Monitor, “These exclusionary policies and vilification of the HDP as 'untouchable' have more consequences on Turkish democracy than on the Kurdish issue itself. They feed an undemocratic atmosphere that facilitates the curtailment of rights and freedoms for all.”

Somer was still hopeful, saying, “At the same time, the need for the participation of Kurds to form a winning majority may force opposition parties to revise their orientation toward the Kurdish issue. This creates the potential for peace and reforms in the future.”

Turkish involvement in Syria and a failed peace process coupled with government-encouraged, ultra-nationalistic programming helps deepen existing Kurdophobia in the country. Public opinion can be remolded. In 2013, public optimism for the peace process reached 84%.

Erdogan claimed for years the government was only targeting Kurdish criminals and those who aid and abet terrorists. But these claims are indefensible. For example, Selahattin Demirtas — the HDP’s former chairperson — has been in prison since November 2016. Even ultra-nationalist Good Party parliamentarians demand his release.

Kumru Toktamis, associate professor of political sociology at the Pratt Institute, told Al-Monitor, “This deliberate disregard of the HDP constituency evokes a state-imposed ethnic uniformity and invokes an authoritarian polity for the country where Kurdish demands are delegitimized. However, at least this has created an opportunity for the Kurds to comfortably claim it is not their claims that introduce separatism in Turkey.” That understanding has been crucial for the growing support in opposition.

Turkyilmaz said, “There [are no more Kurds in] this administration. There is not one Kurdish minister. The government-appointed people in Kurdish regions are no longer of Kurdish origin. There used to be accepted, maybe conservative Kurds who were working for the government. All those considered to be potentially in the Kurdish movement [have been] eliminated. It is politicide. Even in the region, Erdogan no longer talks to his long-time Kurdish friends.”

Kemal Can, a columnist for the daily gazette Duvar, told Al-Monitor the HDP was able to guide its voter base strategically to strengthen the gains of the opposition parties in the last municipal elections. “The government could not make much progress in its efforts to isolate the HDP, but in the meantime, it reduced its own political sphere [to] maneuver."

The government’s attitude toward the HDP and its arbitrary actions in all areas is worrisome. It has taken years off the peace process, which could have saved countless lives and a significant amount of resources.