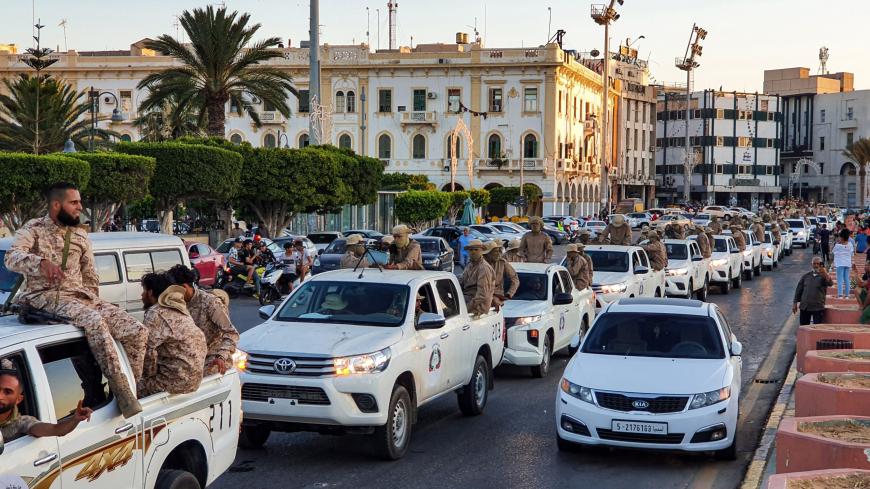 Vehicles of the Tripoli Brigade, a militia loyal to the UN-recognized Government of National Accord, parade through Martyrs' Square at the center of the Libyan capital, Tripoli, July 10, 2020. - Photo by MAHMUD TURKIA/AFP via Getty Images

“President Trump and President Erdogan discussed positive trade issues between the United States and Turkey and underscored our belief in the need for a negotiated settlement of regional issues,” the White House said in a readout of the call.

Why it matters: The Trump-Erdogan call comes as the United States has shown heightened interest in pushing Libya’s warring factions and their foreign backers, including Turkey, to the negotiating table in recent weeks.

On Sunday, the US Embassy in Libya threatened sanctions against “those who undermine the Libyan economy and cling to military escalation” after the Tripoli-aligned National Oil Corporation accused the United Arab Emirates of obstructing the oil exports of the Government of National Accord. Turkey supports the UN-backed Government of National Accord’s forces as they threaten to advance on oil fields in Sirte controlled by the UAE-backed Libyan National Army. Libya’s eastern parliament has also invited Egyptian forces to intervene against the Turkish-backed offensive.

The presidential-level discussion also comes after Secretary of State Mike Pompeo warned Erdogan earlier this month against his bid to turn the historic Hagia Sophia museum back into a mosque in Istanbul.

What’s next: The United States continues to urge a diplomatic solution to the Libya war. US diplomats have recently pushed militias loyal to both the Government of National Accord and the Libyan National Army to disband in order to jump-start the long-stalled UN peace process.

Know more: Metin Gurcan examines the myriad of foreign actors fueling the war and the recent strike against Turkish assets in Libya. And be sure to read Al-Monitor’s Week in Review for more on Erdogan’s increasingly assertive regional ambitions.