Iran executes man it says spied for US and Israel

Mahmoud Mousavi Majd was found guilty of reporting the whereabouts of Qasem Soleimani, the Iranian military commander killed in a US drone strike. 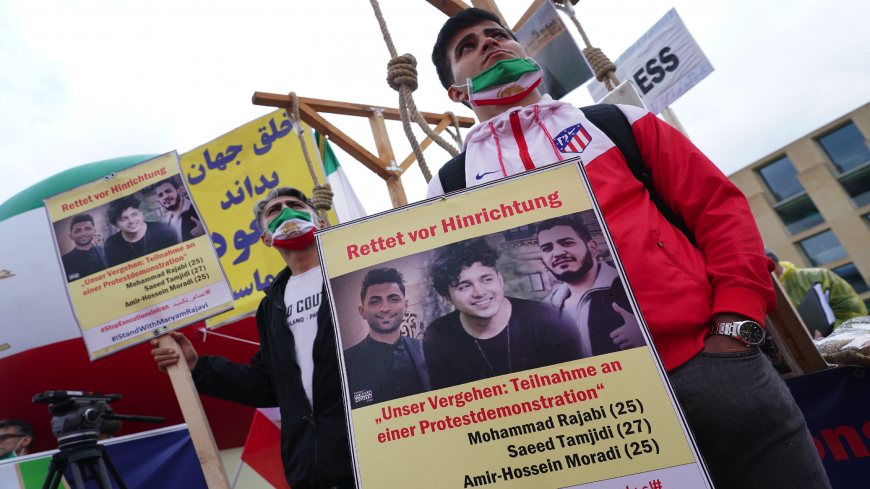 Demonstrators wearing hangman's nooses hold portraits of Amirhossein Moradi, Mohammad Rajabi and Saeed Tamjidi, who took part in street demonstrations in Iran last year and now face possible execution, to demand their release at a gathering in favor of regime change in Iran on July 17, 2020, in Berlin, Germany.

Iran has executed a man convicted of spying for the United States and Israel, state media reported on Monday.

Mahmoud Mousavi Majd, a former translator, was accused of reporting the locations of Iranian troops in Syria and those of Islamic Revolutionary Guard Corps commander, Maj. Gen. Qasem Soleimani. The powerful commander was killed last January in a US drone strike in Baghdad.

Iran’s judiciary said Majd, who was arrested in 2018 and convicted last month, did not play a direct role in Soleimani’s assassination. Spokesman for the judiciary, Gholamhossein Esmaili, claimed Majd received money from both the CIA and Israel’s Mossad intelligence agency.

Esmaili warned at a news conference in June that Majd would “face the consequences” of his conviction, adding, “His masters will also witness the determination, might and intelligence reach of the Islamic Republic.”

In July 2019, Iran’s Intelligence Ministry said it captured 17 people charged with spying on the country’s nuclear and military activities for the CIA. President Donald Trump dismissed Iran’s claim of a US spy ring as “totally false.”

After China, Iran has the world’s highest use of the death penalty, Amnesty International said in its annual report on executions. The Islamic Republic put at least 251 people to death in 2019, the group said.

Iran on Sunday halted the executions of three men accused of involvement in last November’s deadly anti-government protests. Killing the three men would send “a deplorable message to the world,” Trump tweeted in Farsi last week.